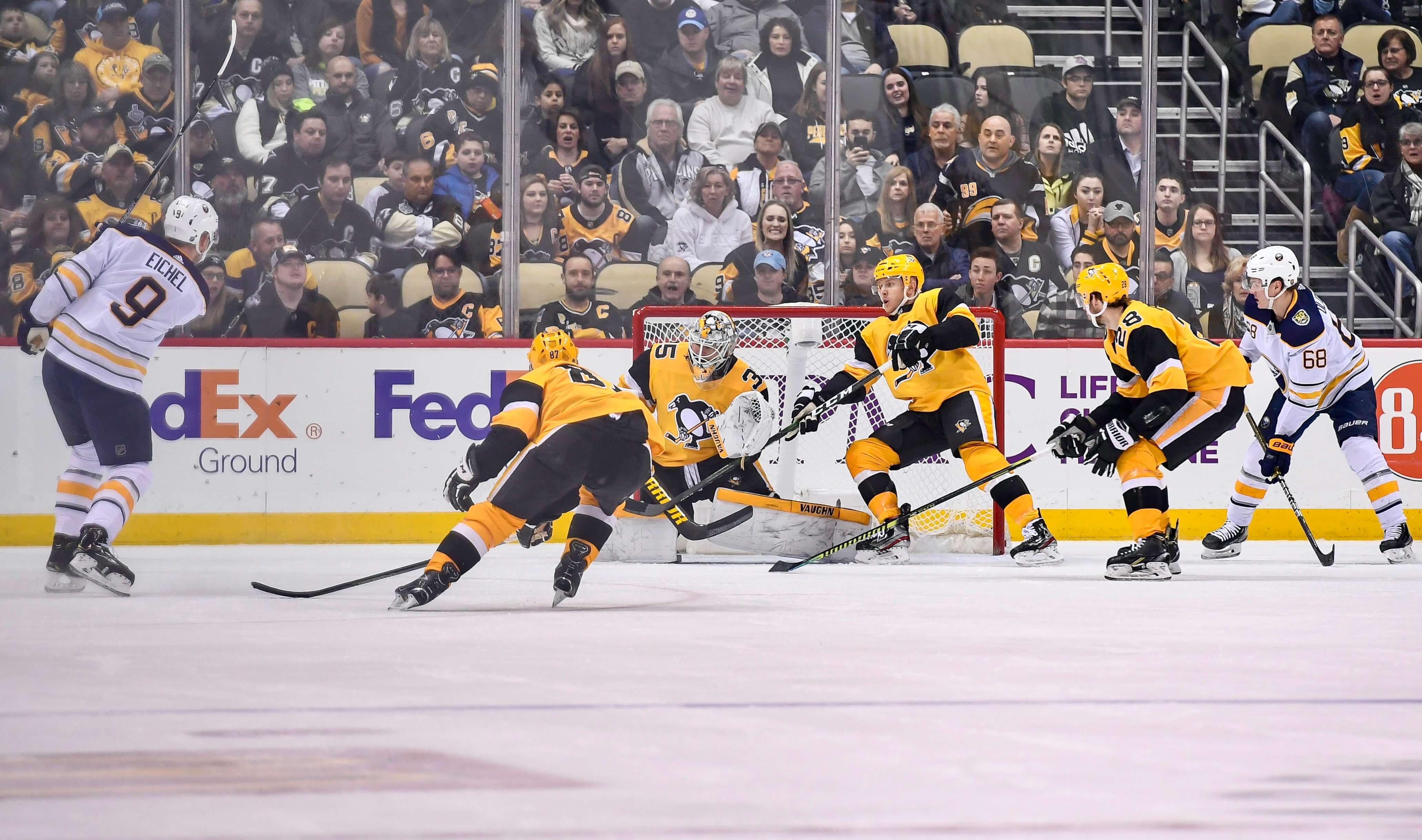 It's tempting, after a terrible loss like the 5-2 pummeling the Penguins absorbed from the Sabres on this Saturday afternoon at PPG Paints Arena, to seek out the snap-of-a-finger fix.

Well, I'm here to tell you it won't happen. And even if there's any such attempt, it'll fail.

Want to see another big trade?

Jim Rutherford's very much open for business on that front, I'm told, in advance of the NHL deadline Monday. And there were a bunch of names bouncing around the building here as potential targets -- Max Domi, Andreas Athanasiou, even Eric Staal came up -- for whatever such peripheral buzz is worth.

Won't matter if Rutherford pulls it off. Not in isolation.

Mike Sullivan was very much in agreement, shaking up his top three forward lines entering the third period, not least of which was the striking removal of Jason Zucker from Sidney Crosby's flank, this after Zucker had pumped three goals in his first five games since arriving from St. Paul. Others shifted around, as well. And on defense, Juuso Riikola lost his spot in the lineup to freshly recalled Zach Trotman, even though Trotman had to slide to his wrong side.

Didn't matter. Any of it. Won't matter much moving forward, either.

Suffice it to say I ran that past Sullivan afterward, and it brought the expected response: "I know our guys know how to play. That's not that's not the issue. For me, the challenge is the mindset. You know: Are we are we thinking the right way before the puck drops? How we committed are we? And are we willing to play that way for 60 minutes? That's a discipline. And we haven't had that the last few games. And so, this is what happens."

That's Jack Johnson bypassing an easy outlet up the left side to toss across to Kris Letang, who butchers further by placing the puck on the blade of Buffalo's Sam Reinhart for another goal at 6:48.

I could share a ton more, but let's leave it with this:

That's the Penguins' entire penalty-killing box, Crosby included, being yanked way over to one side, and everyone ignoring, um, Jack Eichel at the left dot. Which is only the Sabres' raison-d'etre with the extra man.

"We felt like we were able to create a lot of time and space for ourselves," was how the Sabres' Jeff Skinner generously worded it.

Here's how I'd word it: They were giftwrapped most everything they got.

So, completing the above thought, want to see someone read the Penguins the riot act?

Too late. Sullivan tried that with a timeout right after that Eichel strike and, while his players appeared to at least wake up a little, not all of the collective brain cells came along for the ride.

"I thought our team worked hard to try to get back in the game today, but we didn't play smart. So we got beat," Sullivan assessed. "You know, it's not good enough just play hard. You have to play smart. It's the combination that gives you a chance to win. And when we don't have that combination right now."

Nope. Not even when victorious.

In fact, I'd argue -- and I've been arguing this since, oh, mid-January -- that we haven't witnessed peak-fork Penguins for more than a month now. The lone front-to-finish 200-foot performance in all that time came Tuesday against a Toronto team that appeared as comatose that night as the Penguins did here. That's it. The rest were either dominated by Tristan Jarry or Matt Murray, or they came against the Canadiens, Red Wings, etc.

And again, that's not simply solved. Not by trades, not by changes of any kind, not even by getting back the quarter of the roster that's still out with injuries.

Not without a renewed focus on what'd been working beforehand. That's what made this team special, what put it in position toward serious contention for a sixth Stanley Cup. And all the other pieces can't add up to what's missing without the proper approach.

As Sullivan himself noted, "Our guys are saying all the right things," and that was the case after this, too.

Malkin was asked what the Penguins were missing, and he came back beautifully, "We missed the first period. We were not ready."

"But we're not playing right the last 10 games, I think," he'd add. "Same mistakes. We're trying to play easy. It's not the right way."

"We've got to be a lot better," Jared McCann would tell me. "At everything."

"We've got to make smarter decisions," Teddy Blueger would essentially echo from the next stall. "All the little things we were doing before."

Maybe the switch will flip back Sunday in D.C. We'll see.

If it doesn't, then what sure felt like a fun thing the other night when the Penguins overtook the Capitals for first place ... that'll disintegrate sooner than most might realize. See, the Penguins are still atop the Metro, mostly because the Capitals are in their own season-worst slump with four losses in a row, including 3-2 to the Devils on this same day in Newark, N.J. But the Flyers are now just three points back of both. And if one wants to go all-out paranoid, the Hurricanes, the East's ninth-place team, is eight points back.

"When there are 20 games left, everyone tries to fight for playoffs," Malkin added. "We think we're fine. We think we're all right. But every team is close, and we need to understand that."