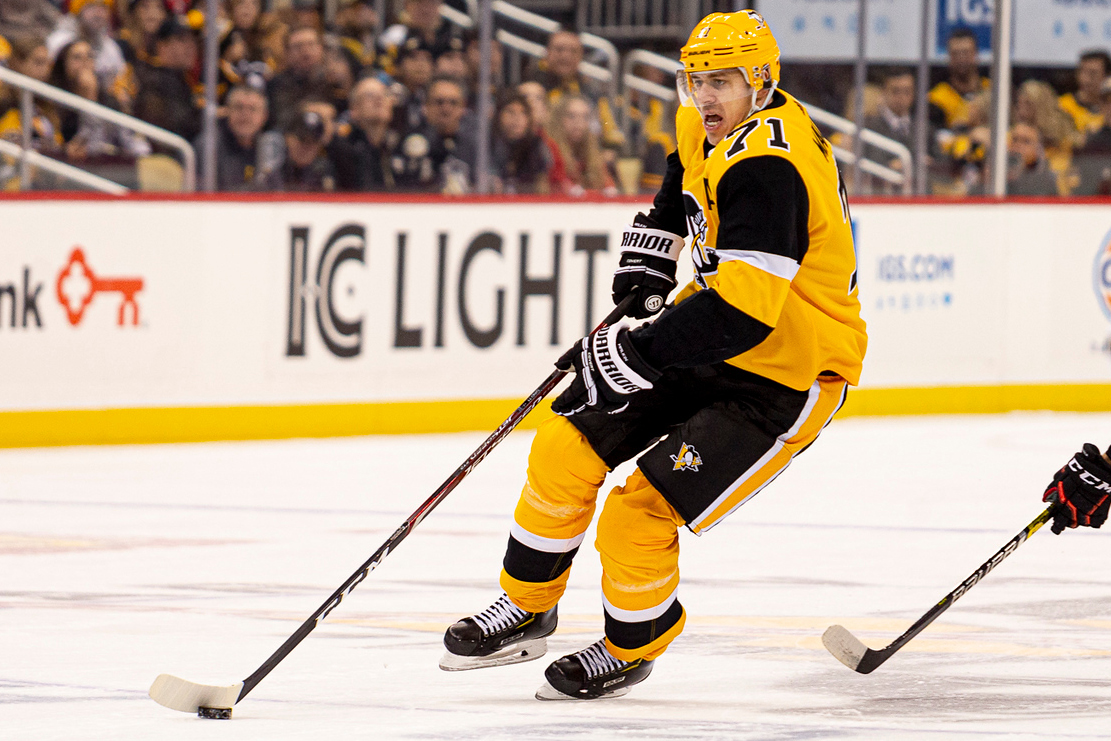 The Penguins' 5-2 loss to the Sabres on Saturday capped off their first set of back-to-back losses since Nov. 29 and 30. Coupled with Thursday's 4-0 loss to the Maple Leafs, the Penguins have been outscored 9-2 in their last two games.

Things aren't about to get any easier, with the Penguins' next opponent being the Capitals in Sunday's 12 p.m. game in Washington.

"This is a huge game for us, both teams," Evgeni Malkin said of the game against the Capitals. "We need to be ready. It's an early game, 12 o'clock, same as today. We weren't ready in the first period."

Malkin pointed to himself as not being ready for Saturday's game against the Sabres. Zemgus Girgensons capitalized on Malkin's turnover 14 seconds into the game to put the Penguins in an early hole:

"I had a couple of  mistakes in the first period, they score," Malkin said. "It's not right. We need to be focused, and start playing how we played in the second and third period."

The Capitals are on a cold run, with a 3-6-1 record in their last 10 games, including a 3-2 loss to the Devils on Saturday afternoon. Alex Ovechkin, although having scored goal No. 700 on Saturday, has dropped off as of late too, with just two goals and no assists in his last seven games. The Penguins still see the Capitals as a dangerous team, though.

"It's not a challenge against (just) Ovechkin, it's a challenge against the whole team," said Malkin. "I play my game, I don't look to (Ovechkin's) game. We know he's a good player. They have (Nicklas) Backstrom, they have Evgeny Kuznetzov. We need to be ready. It's not an easy game for sure."

Given how the last meeting between went between the two teams just three weeks ago, it should be a chippy, physical game. The Penguins won that game, 4-3, and Tom Wilson said afterward that “there are some heated guys ready to respond next game."

"It will be interesting" Malkin said. "We play against each other, we hate each other. I can't wait."

If anything, Sunday's game should provide the spark needed to get the Penguins back into gear. The Penguins haven't won a game since moving into first place in the Metropolitan Division. They're tied with the Capitals with 80 points for first place in the division, but the Penguins have the tiebreaker with a game in hand. The winner of Sunday's game will pull ahead in the division race, raising the stakes for a team that may have gotten a little complacent as of late.

"We've not played great the last, I think, 10 games," Malkin said. "The same mistakes, we play a high-risk game. We try to play easy. It's not the right way. With 20 games left, everyone's trying to fight to the playoffs. We think we're fine. First in the division before this game, we think we're right. But every team is close, we need to understand. We'll try to forget this game and be ready for a big fight tomorrow. "

• Nick Bjugstad, Brian Dumoulin and John Marino will travel with the Penguins on the road trip.

• Jason Zucker was put on the third line with Teddy Blueger and Brandon Tanev in the third period. Jared McCann took Zucker's spot on the top line.

"Our hope is that he can find some chemistry with Sid," Mike Sullivan said of Zucker. "He has at times. We're trying to get him to utilize his skating game a little more than he has at this point. We understand that that's a process, and we'll continue to work with him on that. We think when he really skates, he's a dangerous player, but we've got to get him skating more often than he is right now. If we can leverage his foot speed, he has the potential to be real good with Crosby."

• There were no visiting scouts at the game, somewhat unusual this time of year.

• When exiting the press elevators on the lower level, Penguins coaches and management turn left to get to their offices. The quickest way to the visiting team locker room and offices is to the right of the elevator, though. Jim Rutherford walked off in the direction of the visiting team's room, something I've never seen him do.

• Marcus Pettersson and Jared McCann had stitches after their game.

• Bryan Rust had five hits in the first period. Penguins outhit the Sabres, 19-8, in the first 20 minutes. Rust and Brandon Tanev each finished the game with six hits.

• Patric Hornqvist led the Penguins with five shots on goal and seven shot attempts. Six of his attempts were from the high-danger areas of the ice. No surprises there.

• Malkin did have his lapses, but he also led in takeaways, with three.

• Malkin (898) is 17 games away from tying Mario Lemieux (915) for second all-time in Penguins franchise history in games played.

• Sidney Crosby (315) is five even strength goals away from tying Jagr (320) for second all-time in franchise history.

• Matt Murray (193) is three games away from tying Les Binkley (196) for fifth all-time in franchise history in games played by a goaltender.

• Malkin on Ovechkin hitting 700 goals: "He's an amazing player. He never stops. He has love for his game, he's a Russian machine. I hope we talk a little bit tomorrow after the game, I'm happy he scored. I know it's not easy. Keep going."

• Sullivan on the Penguins' start: "I'm both disappointed and concerned. I think we're saying the right things but our actions have to follow our words. We come out in the first period and we play a high-risk game. You can't win in this league if you play a high-risk game. We were high-risk tonight. ... It's not good enough just to play hard. You have to play start."

• Defenseman Zach Bogosian cleared waivers at noon, allowing the Sabres to terminate his contract. Earlier in the week, the Sabred had attempted to assign Bogosian to the AHL, but he did not report and was suspended by the team. The termination of a player's contract has to be a mutual decision -- it is not a buyout, the team does not owe the player any money, and the prorated value of the contract comes completely off of a team's books.

Bogosian is now an unrestricted free agent and free to sign with any team. In order to be eligible to play in the playoffs, he must sign with a team by Monday's 3 p.m. trade deadline.

• Former Nailer and Wilkes-Barre/Scranton Penguin Gage Quinney made his NHL debut for his hometown team, the Vegas Golden Knights. He's the first Nevada-born player to reach the NHL, and the 63rd player in Wheeling franchise history to reach the NHL. Here's a story I did during the Golden Knights' inaugural season talking to Quinney and another Vegas-born Nailer, Ross McMullan, on growing up and playing hockey in Vegas.