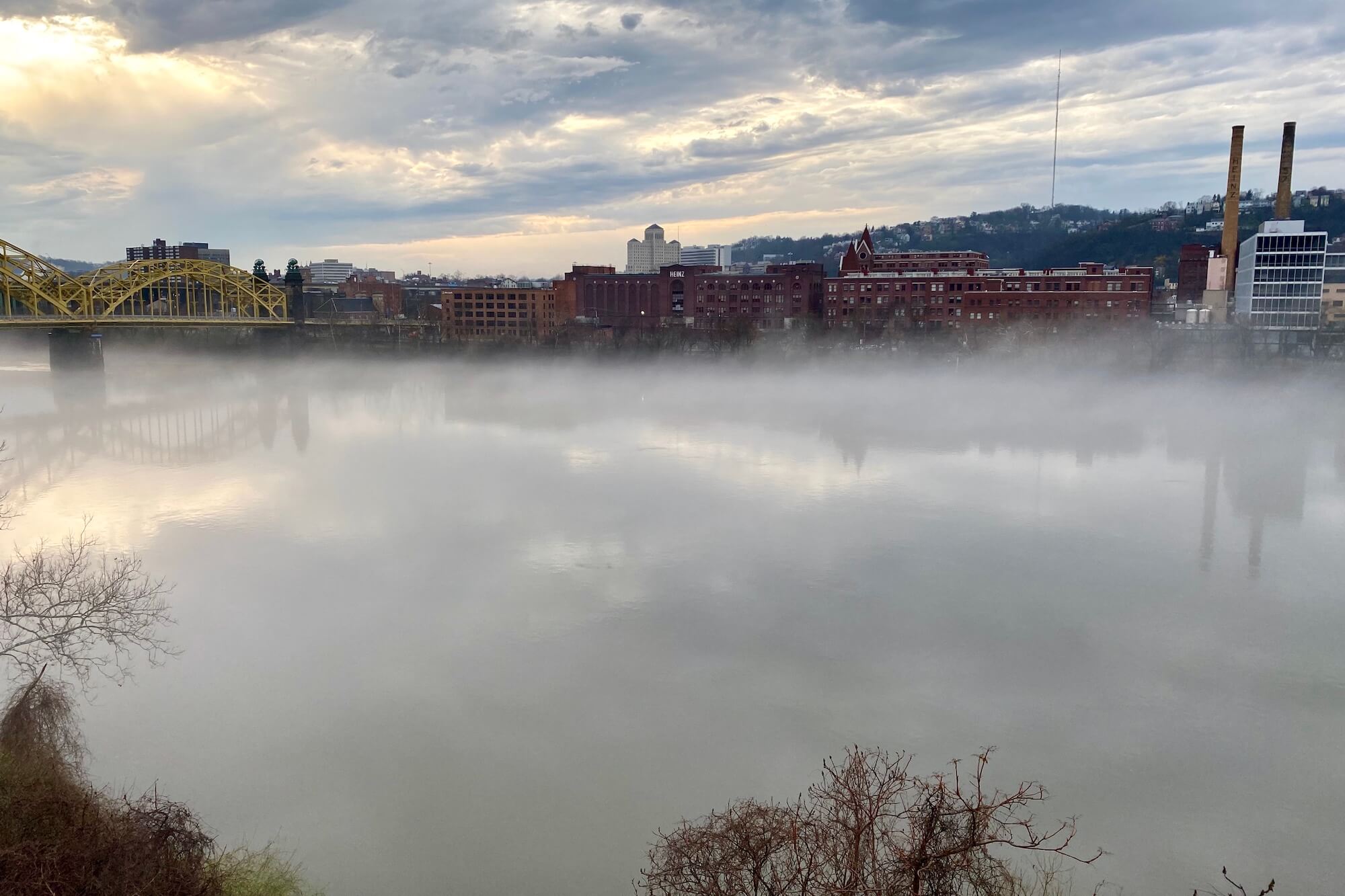 I don't care what anyone thinks about when sports might restart. Not you. Not me.

Definitely not a college football analyst.

And for anyone whose subscription to the Sports Business Journal has lapsed, here's a tidy summation:

Kirk Herbstreit: "I'll be shocked if we have NFL football this fall, if we have college football. I'll be so surprised if that happens." https://t.co/CORhXXT708

It isn't what any single soul on the face of the Earth does. Not even those with legitimate expertise.

Dr. Anthony Fauci is as expert as it gets in this area. He's the director of the National Institute of Allergy and Infectious Diseases, and he's been hailed by all sides of the political spectrum -- imagine that -- as being America's preeminent authority, armed not only with a wealth of experience but also more information than any of us could ever access.

Dr. Fauci spoke the following in an interview Jan. 26, well after the coronavirus had begun spreading across China: “It’s a very, very low risk to the United States."

In another interview nearly a month later, same subject: "As of today, on the 17th of February, the risk is really relatively low."

On March 5: "The risk in the United States as a whole is still low."

Since then, of course, Dr. Fauci has been everywhere around the clock, emphatically -- and rightly -- preaching about the very, very not-at-all low risk to the U.S.

Look, Dr. Fauci didn't suddenly get stupid in the interim. The circumstance changed. Crazily. In China, then Italy, then a few other hot spots, and now here. All of that changed, and so did his stance, as it absolutely should have.

The point: If he couldn't predict this two months ago or a month ago or even earlier this same month, here's betting the college football analyst isn't worth heeding six months away from the first kickoff.

Whether Herbstreit will be right or wrong isn't what's relevant. Rather, it's that he's guessing. And recklessly so, I'll add. Because, as I wrote in a column a week ago, the world's collective psyche is a precious commodity. In this instant, a burst of fatalism might do some civic good in getting people to heed the warnings and take proper action. But not in the long run. They're fatalism for the sake of fatalism. Or in Herbstreit's case ... wow, I can't even imagine what value a bright guy like that could've thought he was offering.

Stunningly, some took him seriously. I saw several remarks on social media that, because Herbstreit's super-connected with NCAA coaches and athletic directors that he'd be privy to the real inside scoop on what'll transpire in the world this fall.

So what I've tried to do in this strangest of times, speaking just for myself, is to focus on what is known. I've checked the COVID Tracking Project probably twice a day, as it uniquely and independently offers detailed data from all 50 states on where this fight stands. I've bookmarked reliable scientific global tracking being done painstakingly by both the New York Times and Seattle Times. I've read the Times of London, which I've trusted forever, with an eye on what's happening in the U.K., plus Italy and Spain, hoping to learn more about what might come next here.

From there, I'm free to make up my own damned mind, while facing the future with the most realistic footing possible right now.

• This is my 18th column in as many days since the world upended with the Penguins being whisked out of Columbus. I’ll keep going like this, too. Every Sunday, though, I’d like to step back, eschew sports and get a little personal over this extraordinary situation. That's why I'm writing this, for anyone who missed last Sunday's column.

• Amid all the aforementioned studying, the only number that feels like it matters -- for countless reasons, chiefly being human -- is the death total.

The U.S. passed 2,000 deaths yesterday, or 2,126 to be precise, of which 780 have come in New York City, 34 in Pennsylvania, two in Allegheny County. There are tons of trajectories to monitor within those, most important among them what percentage of those afflicted don't survive. Because it's there that scientists and medical experts will best be able to weigh/classify this coronavirus against other viruses.

So far, the fatality rate for the U.S. is 1.7 percent. In Pennsylvania, it's been 1.2 percent. But those numbers come within the critical context of only 735,704 tests having been administered nationwide. That's an infinitesimal percentage of our population, and the huge majority of those being tested have exhibited severe symptoms. It's already known that the coronavirus shows mild or even no symptoms in roughly three-quarters of those who get it.

The only answer, naturally, is immensely expanded testing. But we're off to a terribly slow start in that regard, certainly compared to China, South Korea, Singapore and a few other countries that learned lessons a couple decades earlier with the SARS virus. Once we do start expanded testing, that fatality rate might -- or might not -- drop. 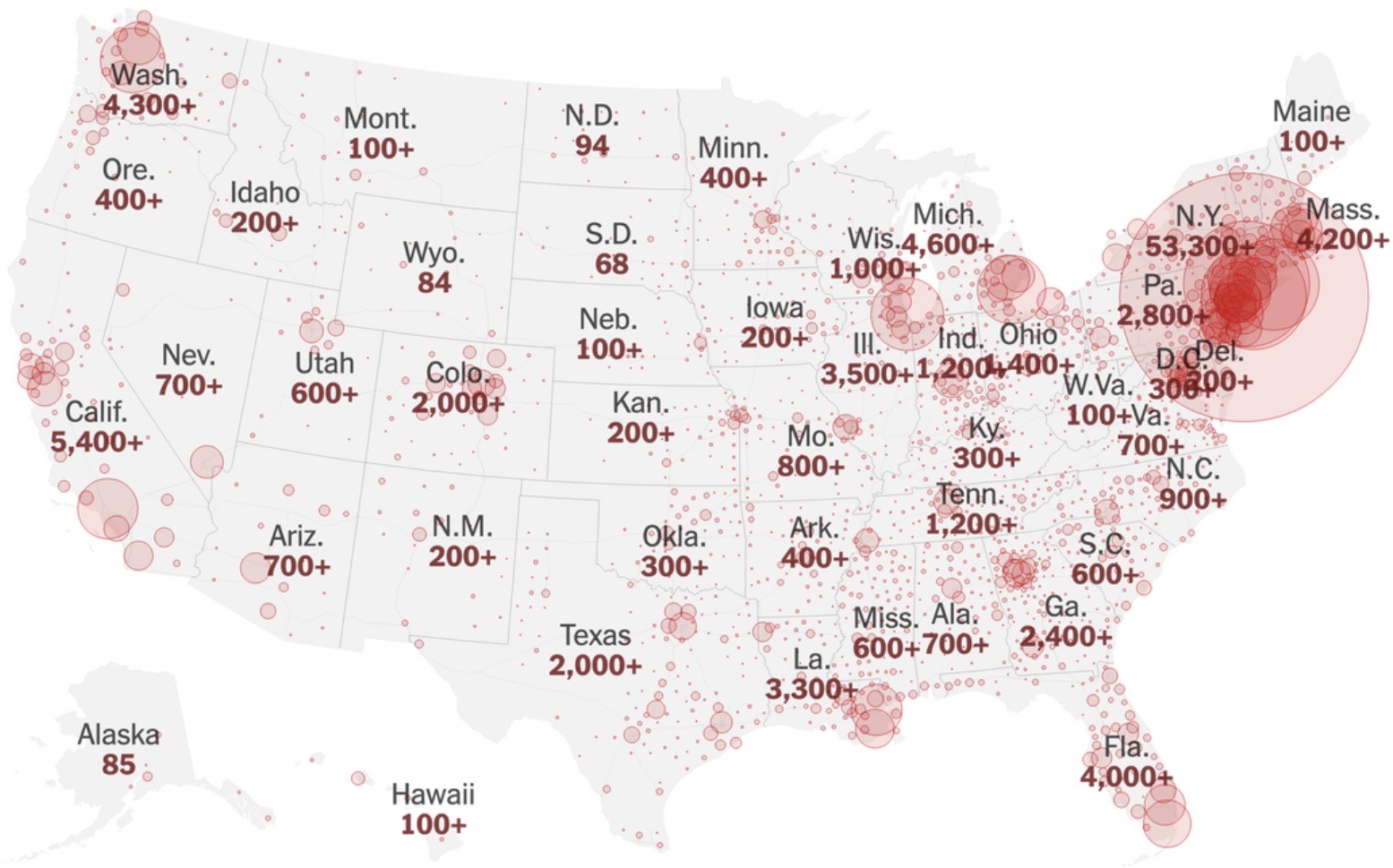 ... and note, again, the mega-circle around New York. That was always going to be our biggest test, with the nation's greatest density at 28,000-plus people per square mile.

• I've also been reading scientific journals, some related to vaccines in progress -- Pitt's working on one, by the way -- but there's no realistic way of crafting/testing/delivering one safely for a year and a half, so I've found myself more interested in potential treatments.

None of the potential treatments being tried currently are proven, but there are several being tried in the U.S., Italy, Spain, France and other places, primarily the choloroquine drug for malaria that a lot of people are buzzing about. It's got its doubters, for sure, but it's undeniably the one gaining the most usage, so at least there'll be a firmer answer about it sooner rather than later.

If that or any other treatment assists in managing symptoms, that'll represent a colossal breakthrough. This coronavirus does most of its damage by attacking the lungs and limiting breathing ... for however long it lasts in the body. If a treatment slows or staves off that impact on the lungs, the survival rate will leap.

• This is when I find myself wondering about potential scenarios, albeit without going the full Herbstreit and publicly making apocalyptic predictions.

If the fatality rate is reduced to that of less frightening viruses, like the common flu, which can kill up to 80,000 Americans a year, how will we react?

What'd be an acceptable fatality rate, assuming there's one at all on the moral front?

And the biggie that's already being broached more and more, it seems: At what stage does the economic damage wrought by a nearly complete global shutdown outdo the damage of the virus itself? Including, to be clear, in lives lost?

We aren't there yet, at all, so this isn't when any of those three questions needs to be posed in earnest, to put it mildly. But we will get there, though we can't know how soon or how much longer from now.

• State of mind matters in any fight, collective or individual. It can't be dismissed and, worse, it can't be damaged. That's why reckless fatalism irks me this much.

• Lives matter, too. Health matters. And they're all that matter in this particular period of our history.

I've heard from family, friends and readers who've been affected by this. It's real. It's scary. Each one of those 2,126 lives lost was a real person, and their loss is scary to someone else. They aren't statistics and ratios and acceptable fatality rates, and I'm always reminding myself of that in doing the reading.

• There isn't a side to pick in this scenario, at least as I see it. I know our current culture converts everything into politics -- and that the politicians themselves hardly help -- but this is so much bigger than that. It's society-altering stuff. And how we handle it in the coming weeks, months, years, could reshape who we are, ideally for the better.

Be smart. Be safe. Be sane.

Be kind, too. If we're good to each other, that'll guarantee getting us through all phases of this.