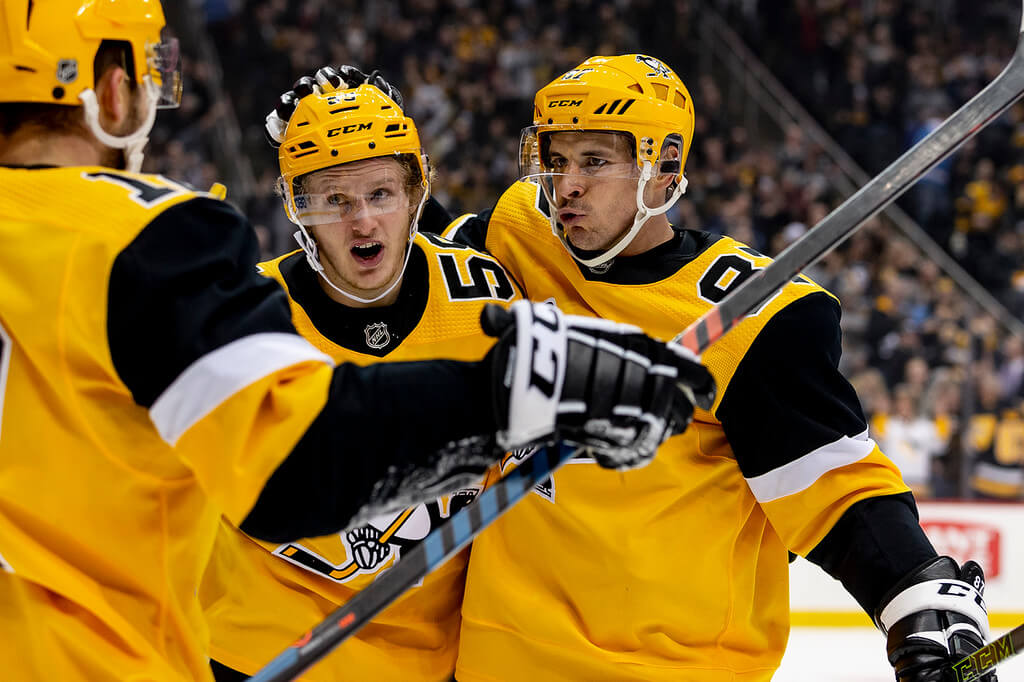 If the NHL season is able to resume, the Penguins have some decisions to make at forward.

The Penguins will likely have 16 healthy forwards by the time play would resume. How would the forward lines look if hockey is to be played this summer? Here are my picks.

It's pretty safe to say that Guentzel will start on Crosby's wing if the season resumes. Mike Sullivan told Dave Molinari that much last week, saying that Crosby and Guentzel "help each other be at their best."

As far as the other wing, Zucker worked with Crosby in the short time they spent together, and we saw that he has the speed to play on that line, something Sullivan named as a priority when finding wingers for Crosby.

“We try to find a combination of speed and guys who have tight-area skills, who can thrive in traffic,” Sullivan said in February. “Because that’s where Sid thrives. He’s so good at that give-and-go game down below the goal line or underneath the hash marks.”

Zucker, of course, hasn't played with Guentzel yet, but some sort of finish to the regular season or play-in series would provide an opportunity to build chemistry in games.

Rust is expected to stick on Malkin's wing, as Sullivan told Molinari. Sullivan said that the two have "developed a certain chemistry" with each other over the course of the season.

I'd expect Marleau to be the other wing on that line. You don't acquire Patrick Marleau to not get him for that kind of top-six role. Marleau played on that line with Malkin and Rust after he was acquired at the deadline, and I'd expect him to stay there. Three days before the league shut down, Sullivan praised Marleau's work on that line

"He’s got a significant amount of scoring chances when he’s been playing with Malkin but he’s also a conscientious player," Sullivan said. "He’s good on the boards, he does other things for that line as well. We think he’s played well, he’s getting more comfortable with every game he plays.”

This line is a tricky one, because there are several players who could be penciled in here. McCann and Hornqvist will definitely be in the lineup, but who takes the third spot on that line?

I chose Rodrigues for a few reasons. The other centers I chose (and McCann) are all left-handed, and Rodrigues is right-handed. It's good to have a right-handed option for faceoffs, and with the other available centers, your top options are Rodrigues or Nick Bjugstad if you want a righty. Rodrigues is also able to kill penalties, and was just heating up at the time of the shutdown, culminating in his first goal as a Penguin in the final game in New Jersey.

Bjugstad wouldn't be a bad option there either if he's healthy. That third line started the season together.

This combination feels like the biggest no-brainer of the group, assuming Aston-Reese is healthy and ready to play if the season restarts. It's one of the few combinations that stuck together throughout the year if all of its members were healthy. This line saw a lot of success during the season, and you need these guys in the lineup so they're available to kill penalties.

Teams are expected to carry expanded rosters if the season restarts, with around 30 players seeming like the expected number. With the number of extra forwards the Penguins were already carrying at the time of the shutdown, they might not have to bring in any other forwards. Adam Johnson and Thomas Di Pauli are likely candidates if they do add additional forwards from Wilkes-Barre/Scranton.