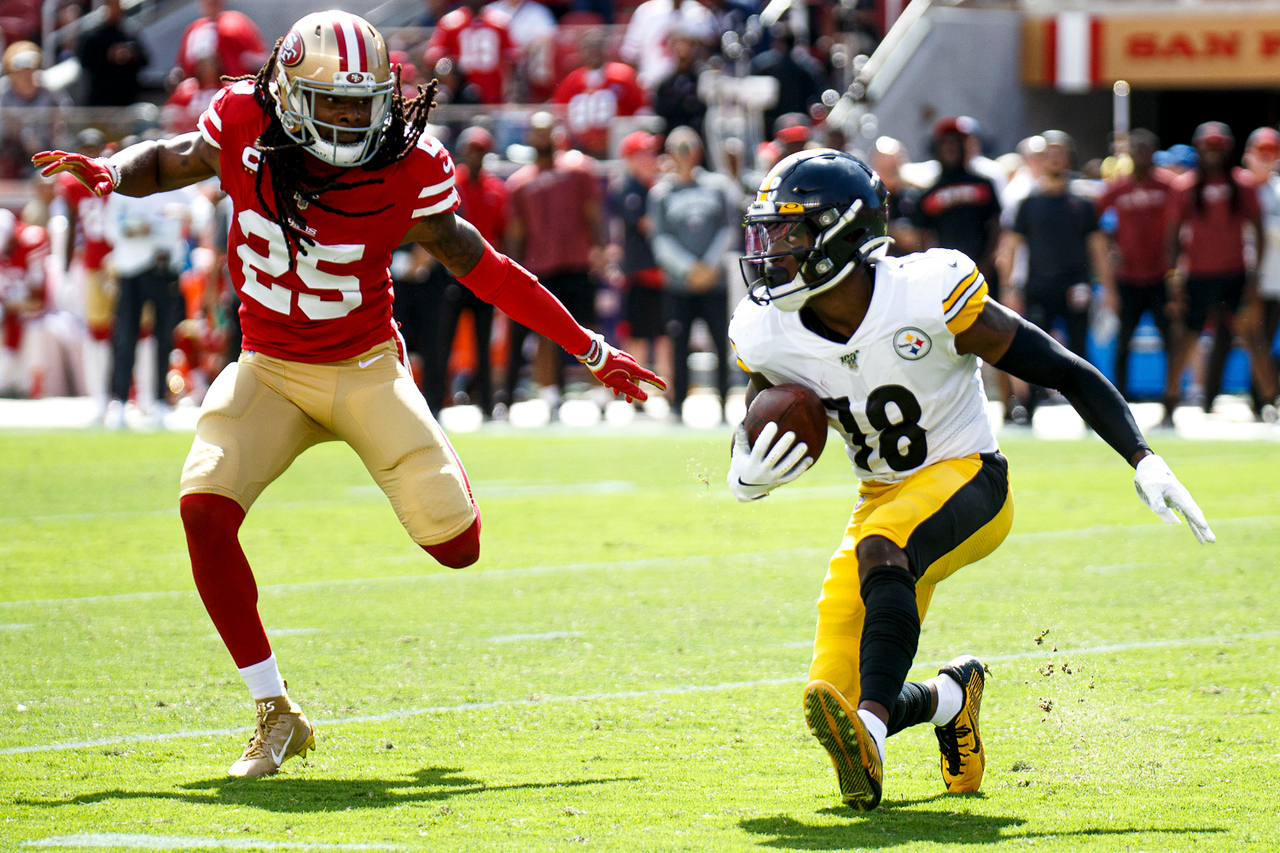 Diontae Johnson had an exciting rookie season. The third-round draft pick led all rookies in receptions in 2019. He earned All-Pro status as a punt returner.

And he did it all while nursing his way through a painful sports hernia that required surgery in February.

Johnson has been working hard rehabbing the injury in Florida while on coronavirus lockdown and is close to being cleared for a full return.

"That happened probably the second game of the season. I was running and it just felt like my groin was getting a little tight on me," Johnson said Wednesday in a Zoom interview. "I’ve been doing rehab down in Florida, going every day. I’ve been doing a lot of core muscle work on a pilates machine. That’s helped me out a lot. Hopefully, I’ll get cleared in the next couple of days. I’ve been staying on that, making sure I’m healthy and come back ready."

Given what he accomplished in his rookie season, the rest of the NFL had better be ready. Johnson has lofty goals for 2020.

He caught 59 passes for 680 yards and five touchdowns in 2019, while also leading the NFL in punt return average at 12.4 yards per return.

That came despite the injury. And despite the fact he really didn't break out until the second half of the season, long after Ben Roethlisberger had been sidelined for the season because of an elbow injury.

With Roethlisberger ready to come back in 2020 after undergoing a surgery of his own, Johnson feels he can produce a 1,000-yard season and earn Pro Bowl status.

"It’s Big Ben. He’s great," Johnson said. "Just being able to work with him this offseason has been good. Just trying to get the timing down with him, what he likes, how he likes to throw the ball on a certain play or certain route. I’m just trying to pick his brain. I might go back up there next week to work out with him again. It’s just getting that timing down and just trying to get a bond together so we can build that trust."

Johnson got that opportunity to work out with Roethlisberger recently and plans on doing so again soon, perhaps next week.

The two didn't get a lot of opportunities to do so last season, however. Johnson was dealing with a groin issue even in the early offseason and Roethlisberger was also limited, as he has been the past few years, in his practices at training camp.

Johnson said his issues last offseason were largely because he had so many offseason visits with teams in the lead up to the draft that his workouts suffered.

"The biggest part was being able to work out, doing all that traveling and stuff, visiting teams. When you get to the team, I was out of shape because I didn’t get to work out like I wanted to," Johnson said. "Being in shape, that’s what they harped on me about, coming in ready to run. It was kind of hard. I had to get my legs back up under me. Learning the playbook was kind of tough, too. But I had my teammates to help."

But, as he continued to make plays throughout the season, Roethlisberger, who started to spend more time around the team after his surgery took place, began to take notice.

"Me and Ben started talking toward the end of the season. I had to prove to everybody I could play, that I wasn’t a bust or whatever," Johnson said. "As the season went on, I started contributing and making plays. He started seeing me make plays and he started interacting with me more, talking to me more. It’s building that trust. I talk to him now every day. That’s my guy. We’ve got big things to do this year, trying to win the Super Bowl together."

Johnson was acquired by the Steelers with the first of two picks acquired from the Raiders in the trade for Antonio Brown. He was an early third-round pick -- the second pick in the round -- but because the Steelers didn't have a second-round selection, having sent it to the Broncos as part of the deal to move up in the first round for Devin Bush, Johnson was essentially the team's second-round draft pick.

And many looked at the former Toledo star as the replacement for Brown. It was an unfair conclusion to draw, but Johnson has many of the same attributes that made Brown a star.

He's more shifty than fast. He's a great return man. And he even came from the MAC, the same conference that produced Brown.

Despite his individual success in 2019, he continues to fly under the radar. When the top rookie receivers of 2019 are talked about, Johnson barely gets a mention.

"It’s been like that since I was in college at Toledo," said Johnson, who was the 10th receiver selected in last year's draft. "Everyone doesn’t really know me. I’ve just got to keep doing what I’m doing and keep working until they respect me. That stuff doesn’t phase me. Everybody is going to have a story. They don’t really know me, my work. They can say what they want. I’m going to continue to be me and help the Steelers win."