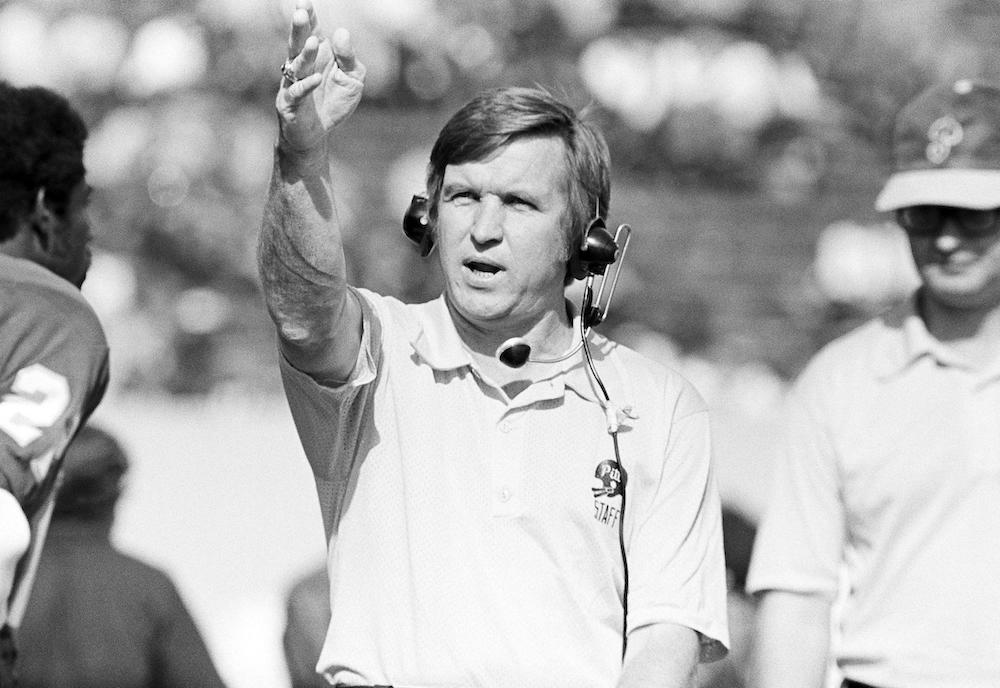 [theme-my-login show_title=0]
Then-head football coach for the University of Pittsburgh, Johnny Majors, calls a first down from the sideline during a home game on Nov. 7, 1973. HARRY CABLUCK / AP
Share
Tweet
Email

With his voice wavering, Jackie Sherrill recalled his final conversation with Johnny Majors.

Two college football coaching legends -- bound by southern ties, playing careers at big-time programs (Majors was a Heisman Trophy runner-up at Tennessee; Sherrill played at Alabama), incredibly successful head coaching stints at Pitt and a friendship that began in 1967 as assistants at Arkansas -- still making plans. Sherrill chuckled when thinking about the stories his "father figure" might tell him.

He chuckled about the stories Majors already told him.

Majors, the man responsible for resurrecting Pitt football in the 1970s, creating the school's script logo and a member of the College Football Hall of Fame, died Wednesday morning at his Knoxville, Tenn., home. He was 85.

"He was one of the best PR guys in our coaching business," Sherrill said. "He always had time to talk to everybody. He never forgot anybody, and he knew everybody."

Majors certainly knew how to build Pitt into a winner.

He arrived at Pitt in 1973 after a four-year stint at Iowa State, where he went 24-30-1. The Panthers went 1-10 in 1972, but Majors, with the help of freshman Tony Dorsett and a talented cast of players from Western Pennsylvania and beyond, changed the team's fortunes.

He led us to our greatest glory and changed Pitt forever.

“I am saddened upon hearing of the passing of my beloved coach, Johnny Majors," Dorsett said in a statement. "He was more than just an integral part of my college football career; he was a dear friend who continued his relationship with me far beyond my playing days. He took a young high school kid and showed him how to be a leader and a man. My prayers are with his family, the Pitt community and all the players and coaches who have been a part of his life.  Rest in heaven, Coach.”

Pitt went 6-5-1 in Majors' first season, earned a Fiesta Bowl berth -- the team's first bowl in 17 years -- and the program continued to ascend. Majors earned coach of the year honors from the Football Writers Association of America that season. He did again in 1976, making him one of eight to win the award on multiple occasions.

"Pitt had to convince him he could win here coming from Iowa State," longtime Pitt radio play-by-play announcer Bill Hillgrove said. "It involved opening the purse strings. He had almost free rein. He said we would bring in almost 80 recruits. He brought in 95 of them."

None were more vital to Pitt's success than Dorsett, the Aliquippa native and Hopewell High School graduate who won the Heisman Trophy and rushed for a then-NCAA record 6,082 yards in his four years with the Panthers.

"It's the first day we're in pads at camp in Johnstown, and Tony busts this 70-something-yard run for a touchdown in a scrimmage," Sherrill said. "Coach Majors is running behind him yelling and screaming. He came back to us and said, 'That's a football player right there.' I'll never forget how excited he was that we found our running back."

Rest in Heaven, Coach. Words could never express what you meant to me. Catch you on the other side.@Pitt_FB @PittTweet pic.twitter.com/4QgM7mA2u2

In 1976, Majors guided Pitt, which started three quarterbacks during the season, to a 12-0 record and a national championship after a 27-3 win over Georgia in the Sugar Bowl. The Panthers' closest game that season was a 24-16 win against West Virginia.

Pitt beat Penn State, 24-7, in the regular-season finale, but, typical of a heated rivalry, the game was close in the first half. The score was tied 7-7 at halftime, and the Nittany Lions held Dorsett to 51 yards.

Then, Majors made a halftime adjustment Penn State did not expect.

"I think everybody points to that Penn State game in '76 when Tony lined up at fullback in the second half," said Hillgrove, who developed a close friendship with Majors. "Tony got to full speed in only two steps. Penn State was on their heels. He was good at adjustments, good at delegating responsibilities, and he thrust his assistants into positions to be successful. Great coaches keep an open mind. Johnny kept an open mind."

Majors left Pitt for Tennessee, his alma mater, in 1977. He spent 15 years as coach of the Volunteers, winning SEC championships in 1985, 1989 and 1990. He returned to Pitt in 1993, but the Panthers struggled during his four-year tenure, never winning more than four games.

"The second time, he didn't have the support from the school he had the first time," Hillgrove said. "He couldn't have the kind of coaches he wanted or some of the things he wanted. Everybody thought Johnny would come in and wave his magic wand and make everything like it once was. It doesn't happen like that."