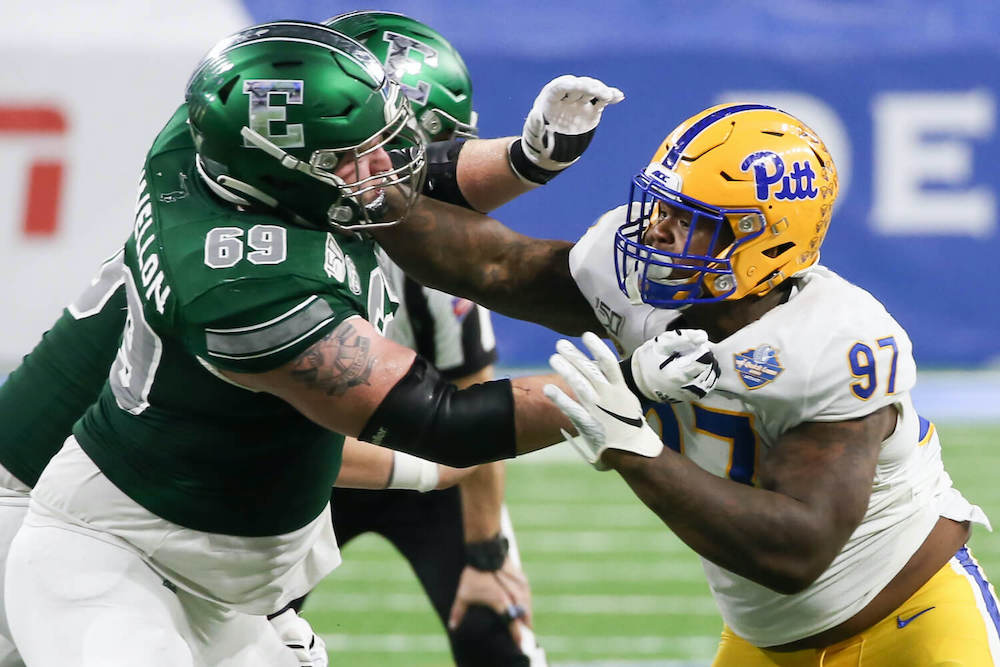 After quarterback Kenny Pickett caught a touchdown pass to put the Panthers up, 35-34, late against No. 15 Central Florida, a Twyman sack forced a fourth-and-long that UCF had little to no chance of converting.

Twyman led a staunch defensive effort with 1.5 sacks in a loss at Penn State, and he dominated an overmatched Ohio offensive line in a Panthers' win.

In the final minute against Eastern Michigan in the Quick Lane Bowl, Twyman applied just enough pressure to force a couple of errant throws and help preserve Pitt's first bowl win since 2013, which also happened to be at Ford Field in Detroit.

Twyman's production in 2019 was off the charts. Almost Aaron Donald-type numbers. In 13 starts, Twyman finished with 41 tackles, 10.5 sacks (tied for 18th nationally), earned first-team all-ACC honors and was named second-team All-America by the Associated Press and Football Writers Association of America.

The 6-foot-2, 290-pound bruiser from Washington, D.C., helped Pitt finish 15th in the nation in total defense (312.9 yards per game). He accomplished enough in his redshirt sophomore season to draw significant NFL interest. Some mock drafts pegged Twyman as a second-day selection, but he, along with defensive end Patrick Jones II and safety Paris Ford, opted to return for another season. For Pitt coach Pat Narduzzi and defensive coordinator Randy Bates, it was better news than landing a handful of big-time recruits.

And as Twyman watched the NFL Draft in April be conducted virtually because of the coronavirus pandemic, the confidence in his decision grew.

"Even if it wasn't a pandemic, you know, a lot of people do stuff from home as well," Twyman said recently during a video conference call with reporters. "(The draft) crossed my mind, but, like, I'm just glad to be back with my brothers and, you know, give us another winner."

Pitt went 8-5 last season, the same record Narduzzi posted in each of his first two seasons. With Twyman, Jones and Deslin Alexandre back on a defensive line that should be boosted by the return of Rashad Weaver and Keyshon Camp from injuries, the Panthers could boast one of college football's toughest fronts.

Expect Twyman, a burly combination of strength, agility and a top-notch swim move, to lead the charge. He's considered the No. 5 draft eligible defensive tackle by ESPN's Mel Kiper Jr. and draftsite.com tabbed him No. 11 overall to the New York Jets in the 2021 NFL Draft in a recent mock.

Those are goals Twyman is working toward, as evidenced by an impressive workout video:

If you didn't watch the video, that was 33 reps of 225 pound on the bench press.

"That was good, but I still got to work to do," Twyman said.

Some of that work took place during individual workouts, but Twyman has done more than physical preparation during the coronavirus pandemic.

"It teaches you how to train like a pro because you have all this free time on your hands," he said. "This is really self-managing yourself and training like a pro. There were a lot of one-on-one workouts and stuff like that with you, yourself and your trainer. I know for me personally, I've just been taking this stuff like a pro, trying to develop my mindset."

Video conference meetings with Narduzzi, defensive line coach Charlie Partridge and strength and conditioning coach Mike Stacchiotti helped develop Twyman's mindset this offseason, but the bulk of work begins to take shape Monday, when Pitt begins a phased return to football players for voluntary offseason workouts. Pitt's offseason model is designed around an expected August training camp and was based on guidance from university health experts in addition to other health agencies.

When Twyman and teammates report for workouts after undergoing a period of quarantine, they will receive instruction on safety protocols and maintaining them, a daily screening questionnaire and temperature check, the use of personal protective equipment and be in smaller workout and meeting groups.