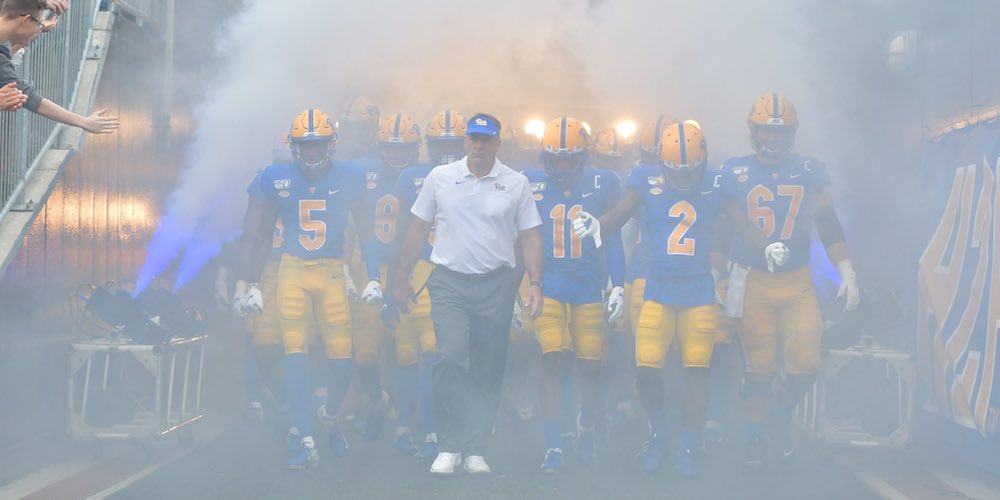 Pitt football began welcoming players back to campus Sunday, the beginning steps in preparing for voluntary workouts and an August training camp.

Turns out the timing of Pitt's process falls in line with a plan prepared by the NCAA Football Oversight Committee.

Sports Illustrated reported the committee put together a four-phase plan that includes six weeks of mandatory workouts. July walkthroughs and August training camp are part it. The plan must be approved by the Division I Council, which meets June 17.

Pitt, which kicks off its season Sept. 5 against Miami (Ohio) at Heinz Field, can begin in-person workouts with players beginning July 13, which falls 25 days before the first permissible practice date. Head coach Pat Narduzzi and his staff will be permitted to use a football in drills July 24, and walkthroughs and meetings can total 20 hours per week.

Under the plan, Pitt's training camp could begin Aug. 7.

• Pitt will begin its fall semester Aug. 19, a week earlier than scheduled under an adjusted calendar and with classroom constrictions because of the coronavirus pandemic.

The last day of class for the fall semester is Nov. 20.

Chancellor Patrick Gallagher expanded on Pitt's plans in a letter posted on his website.

• Ian Troost, a former Pitt Panthers mascot and walk-on kicker in 2017 who knelt during the national anthem to peacefully protest police brutality and racial injustice, and former track and field athlete Jordan Fields composed a letter to the school’s athletic department and administration. The letter was sent Monday.

Troost and Fields are Pitt graduates.

We write this as alumni with a complicated love for the University of Pittsburgh. We find it difficult to differentiate between our pride in our historically groundbreaking institution, versus our frustration because we know Pitt is not currently doing enough to listen to, uplift, and support its Black students and student-athletes.

While you recently made (delayed) statements (nine days after four police officers murdered George Floyd), we want you to know your overall silence on the institutionalized nature of police brutality and racism has been deafening to your alumni, faculty & staff, fans, students, and student-athletes.

Your retweets of Nike advertisements, acknowledgement of pain, and statements of support during the past week, all of which are reflective of the stance that Black Lives Matter, are appreciated. However, they appear performative, as they are lacking a course of action to make the University a safer institution for its Black students and student-athletes.

As I reflect on my time as a University of Pittsburgh football player, and my peaceful protest during the national anthem in 2017, I can’t help but think about how your silence goes much farther back than the past week. I think about how multiple Black teammates of mine were dissuaded from peacefully protesting in 2017. Additionally, I clearly recall the backlash from specific Athletic Administrators who told me, “You’re just a 20 year-old that doesn’t know what you’re talking about,” as well as that I was being selfish and attention-seeking. Most importantly, these Administrators politicized the protest, and implied that the lost revenue for the University, whether from donors or season ticket holders, was more important than taking a public stance on the fact that Black Lives Matter.

While the Administration made mistakes, I feel there is tremendous opportunity for growth at hand. As an ally, it is my duty to amplify the voices of my Black peers. In order for effective growth to take place, I recommend you listen to the thoughts and experiences of your Black student-athletes, starting with former Track & Field athlete, Jordan Fields.

As a university alumnus and former student-athlete, I am gravely disappointed that it has taken this long for the University of Pittsburgh’s Athletic Department to address the murders of Ahmaud Arbery, Breonna Taylor, and George Floyd.

Black student athletes at the University of Pittsburgh have historically shown a deep commitment to their sport and University, only to have a fraction of that commitment returned in support from the campus community.

In this moment of truth, there is an opportunity for the past to be prologue for significant improvements to the experiences of current Black student athletes. In order for that to happen, the following structures and opportunities are essential:

1. A formal committee, composed of Black student-athletes, athletes of color, and allies from each team to ensure that the breadth and depth of Black student-athletes’ concerns are met, and that our standards are continuously upheld. This committee must consist of a combination of athletes, ranging from every year of education, to those that do not receive much playing time or exposure, to starters and captains. This will ensure that the diversity of experiences of student-athletes are heard. In order to effectively do that work, the committee must meet twice a semester with Athletics administrators, the Dean of Students, Office of Diversity and Inclusion, the Faculty Athletics Representative, and any other parties deemed necessary or appropriate. This Committee should be in place no later than October 1, 2020.

2. Mandatory anti-racism/anti-bias training and the development of anti-racism affinity groups. Training must be mandatory for staff AND student athletes to work towards developing a more culturally competent department.

4. A specific administrator, or committee, tasked with receiving whistleblower complaints related to bias, in order hold coaches, faculty, and other student athletes accountable for their actions without fear of retaliation against them for facilitating those complaints. This individual/committee must conduct an annual report on the effectiveness of anti-bias training within the day to day life of the Department, and must not report within the Department’s reporting structure.

6. The severing of all ties with any boosters and donors who are known to exhibit racist behavior via social media, or otherwise, as the University of Southern California has done.

Pitt Athletics has stood on the front lines of social justice before, notably when Panther tailback Bobby Grier integrated the Sugar Bowl in a racially charged era and location by participating with the Panthers in the 1956 edition of the game. Minimizing the contributions of men and women the likes of business leader Herb Douglas, the oldest living African American Olympic medalist, two-time Olympic champion Roger Kingdom, NFL and College Football Hall of Famers like Curtis Martin, Hugh Green and Tony Dorsett, the late Lorri Johnson and countless others only furthers our pain. We cannot let those legacies be diminished.

Our Department’s core values, or bridges, explicitly talk about how we connect our past with our present and future to Unite and Engage, and that we lead with Integrity Always. Pitt student-athletes define the “Gold Standard ” as the expectation to achieve at the highest level, relying on Respect, Accountability, Trust, Teamwork and Leadership to underpin it.

As Forever Panthers, we feel it is our duty to speak up in support of current student-athletes, and encourage the Department to hold itself accountable. It’s time to take a public stand against racism and systemic injustice, and return to our position as leaders in the effort to dismantle racism in college athletics. Starting today, let’s be the “Gold Standard” for Collegiate Athletics across the country. Hail to Pitt.