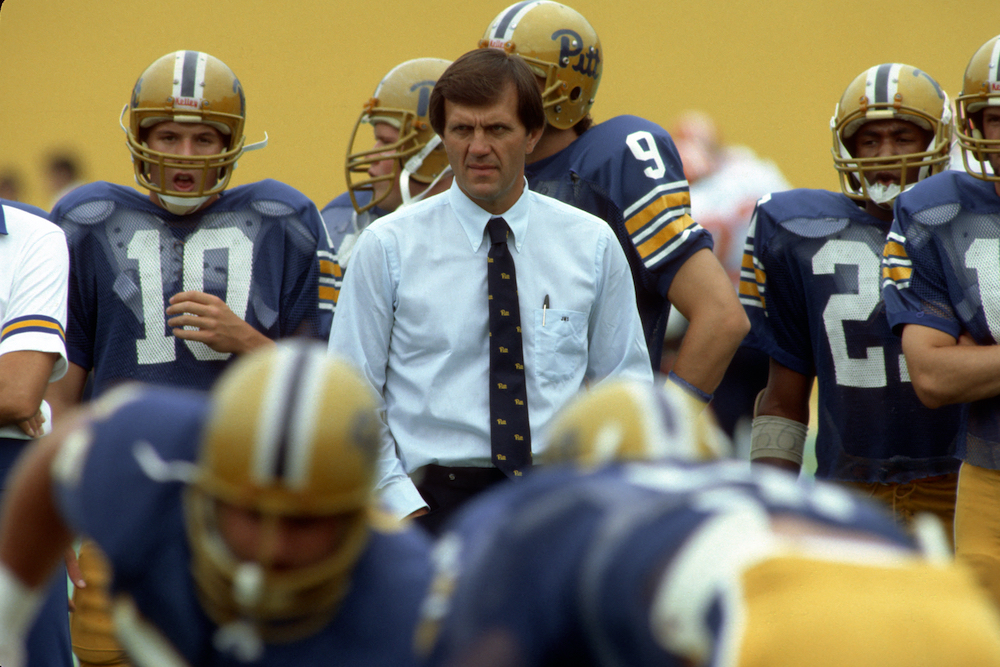 When it comes to building a winner in college football, Jackie Sherrill bought into a seven-step approach.

It started with full support from the administration, meaning the chancellor, the athletic director and beyond. That support system must extend to the faculty. Were professors willing to look at transcripts and interview players when they decide on a particular line of study or a desired course? The student body must support the team, and alumni need to be on board, too. Then, there's the players and coaches. If the talent isn't in place, the rest is wasted.

Surprisingly, it's the media, and Pittsburgh provided Sherrill with the perfect hook for recruits.

"At the time, while I was in Pittsburgh, it was known as the City of Champions. There (were) a lot of positive feelings," Sherrill told me this week in by phone from his home in Wimberley, Texas. "That's all part of the media. They kept writing about the City of Champions, and that thing helped us because of what people were saying about the city. People wanted to be part of what was going on here. They wanted to be part of a winner."

Pitt football certainly was a winner during Sherrill's two stints with the program.

From 1973-75, Sherrill helped Johnny Majors orchestrate a remarkable turnaround at Pitt. The Panthers went from NCAA Division I (now known as Football Bowl Subdivision) bottom feeder to emerging contender with Majors as head coach and Sherrill serving as defensive coordinator.

Pitt went 21-13-1 in the three years Sherrill served as defensive coordinator and a top recruiter, and the coaching staff's work helped set the stage for Pitt's 1976 championship season.

Sherrill spent that season as head coach at Washington State, but it wouldn't be long before he returned.

When Majors left Pitt for his alma mater, Tennessee, in 1977, it created an opening, and Sherrill was the perfect fit. After all, those seven steps already were in place. Then-chancellor Wesley Posvar and athletic director Cas Myslinski were committed to maintaining a winner.

"If you look at Coach Majors' time and my time, we were fortunate that the administration and faculty was excellent," Sherrill said. "(Posvar and Myslinski) deserve a lot of credit. They had confidence in us, and let me tell you, it was a two-way street. That meant a lot."

And Sherrill being a licensed pilot helped. Not many knew that about Sherrill as he rarely divulged personal details, such as playing for Paul 'Bear' Bryant at Alabama.

Sherrill might not divulge personal details with ease, but he sure could recruit and being a pilot helped land a few during his stint as head coach from 1977-81.

Call it an eighth step in building a winner.

"To be honest, it was kind of intimidating while he was recruiting me," said Troy Benson, a former Pitt linebacker who played for the Jets from 1986-89 and was on the team for Sherrill's last season. "He takes me on a plane ride. He had his pilot's license, and he would fly around to recruits. I was definitely intimidated. ... But I felt safe with him. And, you know, he never wrecked."

And he rarely lost as head coach at Pitt.

With a 50-9-1 record in five seasons, Sherrill's .842 win percentage tops Pitt's all-time list. That's ahead of coaching legends Jock Sutherland, Glenn 'Pop' Warner and Majors, and it's a big reason why Sherrill is part of a 13-member class being inducted later this year into the Pitt Athletics Hall of Fame. Pitt will honor its inductees at an Oct. 16 dinner, and the honorees will be recognized during the Panthers' Oct. 17 game against Notre Dame.

In Sherrill's first season as head coach, and with considerable roster turnover from the national championship season, the Panthers finished 9-2-1, crushed Clemson 34-3 in the Gator Bowl and finished No. 8 in the final Associated Press Top 25 poll. But the biggest win Sherrill put together that year was his recruiting class.

There was Hugh Green, the dominant defensive end who finished as Heisman Trophy runner-up in 1980. There were a pair of future Pro Football Hall of Famers in offensive lineman Russ Grimm, a converted high school quarterback, and defensive lineman Rickey Jackson. Offensive lineman Mark May won the Outland Trophy in 1980 as the nation's top interior lineman. Greg Meisner, Benji Pryor, Carlton Williamson and Ray 'Rooster' Jones were part of that class, too.

"We were very fortunate, Johnny and I. In Western Pennsylvania and Eastern Ohio, you had a lot of good players who were from the old school. Tough, disciplined kids. Mentally and physically, they were very tough," Sherrill said. "Then, you throw in kids from the South and New Jersey and New York with the speed. It created a team with a lot of ability."

And Sherrill knew the right buttons to push, even after one of the more devastating losses in program history.

"He made us take the stickers off our helmet after the game and said 'Nobody has a starting position,'" DeBartolo said. "During practice going into the (Sugar Bowl against Georgia), he played Marlon McIntyre in front of me. Before kickoff, he said, 'Did you think I wasn't going to start you?' He knew how to break you down, but he knew how to build you up."

It was Sherrill's last game as coach at Pitt.

"I wish Jackie wouldn't have left when he did," Benson said. "But he got an offer he couldn't refuse."

He left for Texas A&M, signing a six-year contract for $1.7 million, a massive deal at the time. There, he spent seven seasons, won 52 games and resigned after the program was placed on two years of probation for a series of violations. Two years later, Sherrill was hired in 1991 at Mississippi State. He spent 13 years there and won a program-record 75 games. He retired after the 2003 season when the Bulldogs were given four years probation for recruiting violations by boosters and former assistants.

Allegations of unethical conduct against Sherrill while at Mississippi State were dismissed, and he was not found guilty of any personal infractions while at Texas A&M.

But, looking back, Sherrill admits staying at Pitt would have been the right move.

"With the talented players we had coming back, we would've won a national championship in 1982," he said. "When I look back, there were so many good players, and one of those was No. 13 (Marino). With Jimbo (Covert) and those guys, we would've had a great chance. It was hard leaving that team, and it wasn't easy telling them, especially Danny."

DeBartolo agrees about Pitt winning the title in 1982 if Sherrill stayed, but he took things a couple of steps further.

"Pitt would have won five national championships with Jackie," DeBartola said, "starting that next year."

Share
Tweet
Email
Players to MLB: Just tell us ‘when and where’
Three Steelers who were cap ‘busts’