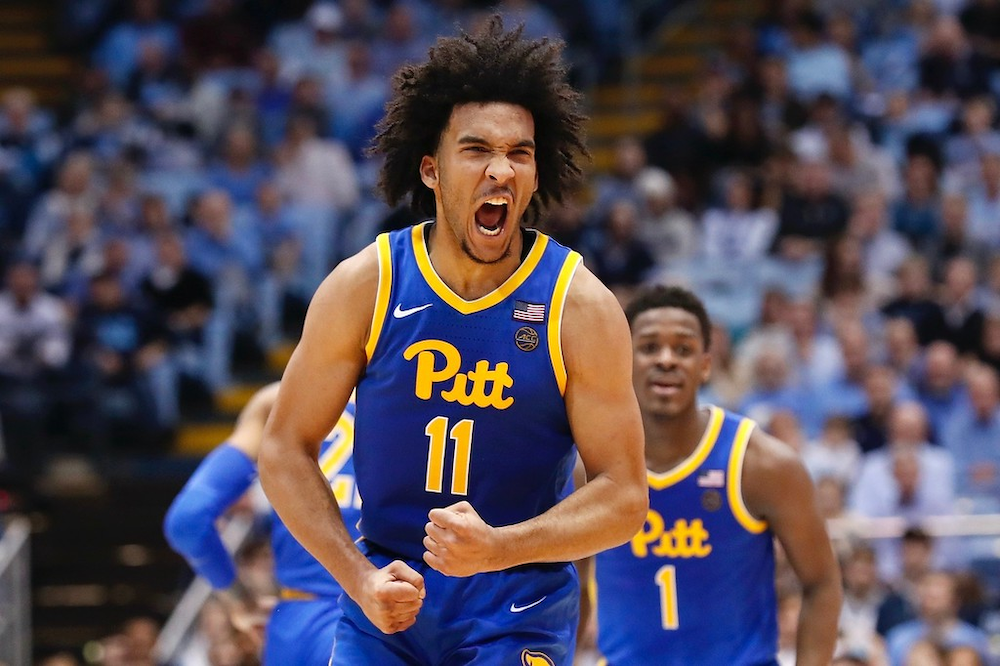 After producing one of the best freshmen seasons in the history of Pitt basketball, Justin Champagnie heard the rumblings.

Would he transfer, perhaps somewhere closer to his Brooklyn, N.Y., home?

Would he test his luck and declare for the NBA Draft?

There was so much talk about Champagnie's possibilities, he took to social media to address them.

I’ll be back for more https://t.co/yhsgXmoPxb

Consider his return a big win for head coach Jeff Capel and the Panthers, who struck gold in landing the underrated three-star prospect from Bishop Laughlin High School, where Campagnie starred alongside twin brother Julian, who plays at St. John's. After all, Champagnie, a 6-foot-6 forward, led Pitt in scoring (12.7) and rebounding (7.0) last season, numbers that earned him a place with Charles Smith, Sam Clancy and DeJuan Blair among the program's top impact freshmen.

But Champagnie told me Friday from his Brooklyn home that no one needed to worry about his intentions.

"There wasn't a doubt in my mind that I (have) to come back and make myself a better player," he told me. "I knew I was coming back, regardless of what people were saying because I wanted to be with my guys. I was coming back next season to take care of business."

For Champagnie, that business consists of helping get the Panthers back to the NCAA Tournament, a place Pitt hasn't been since 2016, the final season under Jamie Dixon.

And that business begins June 28, the date Pitt basketball players return to campus.

"We have a two-week quarantine when we get back," Champagnie told me. "After that, we're allowed to be in small groups. We're looking at some time in July to hopefully get started."

In the meantime, Champagnie is doing what he can to improve, though circumstances brought on by the coronavirus outbreak aren't making it easy.

He and a few friends occasionally work out together, mostly lifting weights and "doing the stuff we can do, just working a lot to stay in shape." He has a barbell at home, and he gets a time in the gym "here and there, though I'm kind of rusty" because he lacks full-time access the way he did his freshman year at Pitt before the shutdown halted the college basketball season a day after the Panthers' season-ending loss to North Carolina State in the second round of the ACC Tournament.

There also are weekly Zoom meetings with teammates, which include the freshmen recruits, and coaching staff. Coaches give players activities to work on that week, plus it gives players an opportunity to bond.

"It's tough because there's not much to do," he said. "All I know is when I get back to school, I can't wait to go to work."

Champagnie already knows a couple of the incoming freshmen. Guard Femi Odukale also lives in Brooklyn, and Champagnie was AAU teammates for a season with Max Amadasun.

Consider it a reopening of the New York to Pitt pipeline.

"One of our coaches, Ronald Ramon, told us how back in the day, Pitt always had good players from New York, especially Brooklyn," Champagnie said. "We've got to get that feeling back. For me personally, I feel like I never back down from anyone. I'm not afraid of anybody. New York players, that's just our mentality. We're always underdogs, and we love the challenge."

Unlike many freshmen, who tire as the schedule progresses, Champagnie improved. After a mini-scoring slump in early December, Champagnie reached double figures in 17 of Pitt's final 22 games. He hit the 30-point mark twice, including a career-high 31 points against Wake Forest in the first round of the ACC Tournament after finding out he wasn't named to the conference's all-freshman team.

He displayed quickness and explosiveness, blocking eight shots during the team's final four games. He continually scored near the rim and even flashed the ability to hit from the perimeter, though his jumper and dribble penetration are areas he wants to improve.

No doubt Champagnie offers an intriguing mix, one that could help turn him into an NBA player, particularly if he puts together another strong season.

A pro career might be on his mind, but he's focused on more immediate tasks.

"I don't want to talk too much into the future," Champagnie said. "If the time comes, I'll talk with my coaches. They will have my best interests at heart and be honest with me, steer me to the right decision. I just want to get those Ws. I want to get Pitt back to the tournament."

But does Pitt have the right mix to return to the tournament? Champagnie certainly believes so.

Point guard Xavier Johnson and forward Au'Diese Toney are back for their junior seasons. Center Terrell Brown will be a senior. Guard Ithiel Horton, a transfer from Delaware, is eligible after sitting out last season. Plus, Capel and company put together the nation's No. 20 recruiting class according to Rivals.

Champagnie added another reason why Pitt should improve on last season's 16-17 finish and contend for that elusive tournament berth.

"This team is made to stick together. Last year, we kind of stood off sometimes," he said. "There were people with their own agendas, but those people are gone, transferred. Personal agendas aside, you've got to get the job done and just win."

Originally, Champagnie was supposed to arrive at Pitt for the upcoming season. He was scheduled to be part of the 2020 recruiting class until deciding to reclassify.

He considers it one of his best decision, as he got to Pitt and "fell in love with Pittsburgh."

And it changed his perspective.

"As a kid, I always wanted to go to the NBA," he told me. "But getting to the tournament, winning at Pitt, these are my real dreams. It's do or die, and we're going to work hard and get there."