Each Saturday during the ongoing apocalypse, I’ll revisit an older column that ran on this site, accompanied by a handful of current observations about it at the bottom.

If not for one timely error by the Penguins, Mario Lemieux might not have found himself wide open with the puck on his stick, cradling a golden chance to decide the game in overtime.

"We were all messed up," defenseman Joel Bouchard said after the 4-3 victory against the Edmonton Oilers last night at Mellon Arena. "All of us were on the wrong side."

But it still turned out just right for a team that desperately needs every bit of fortune it can find. 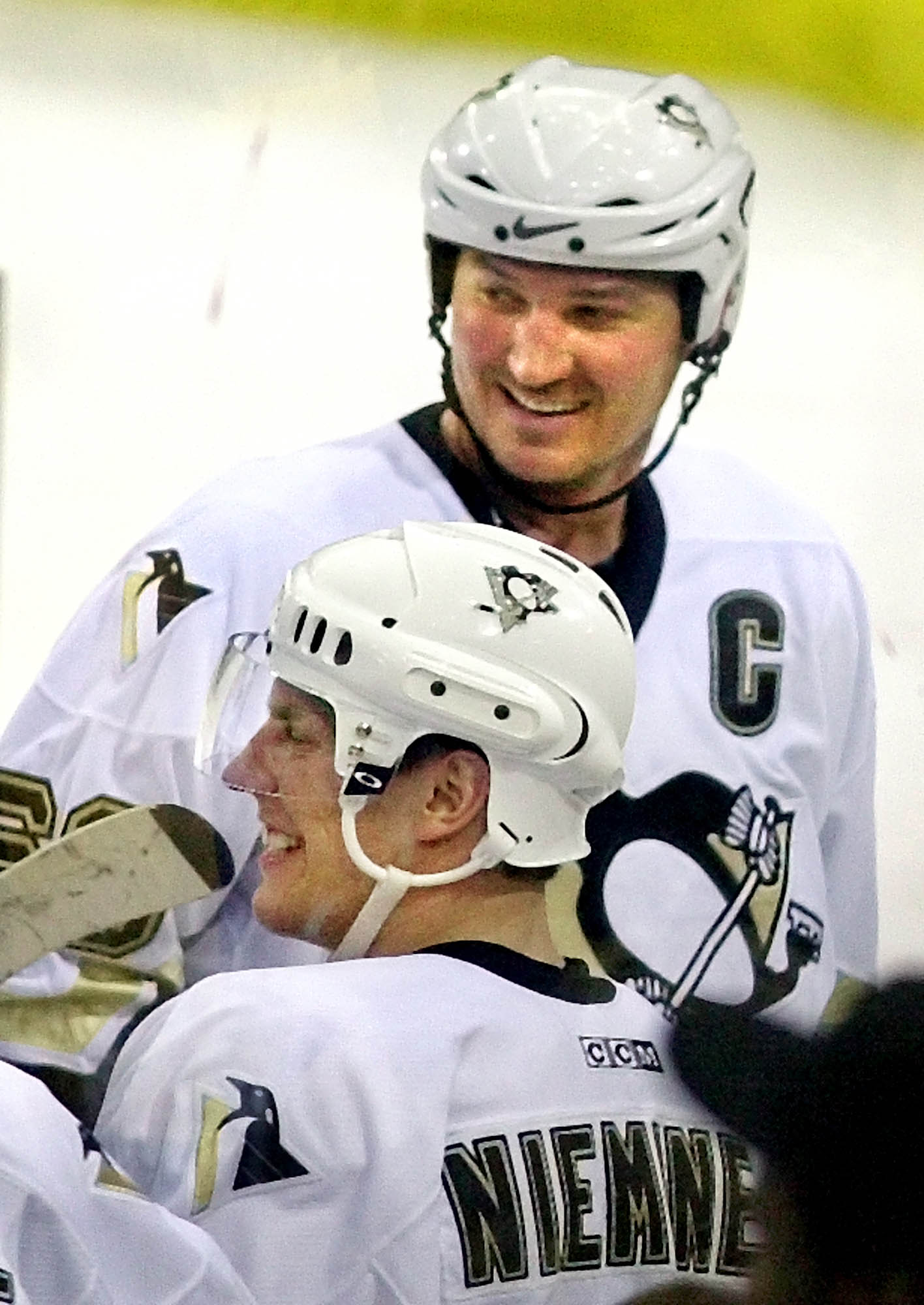 The Penguins were awarded a power play 53 seconds into the extra period, center Randy Robitaille drawing a tripping minor by Oilers defenseman Alexei Semenov. Because of the overtime rules, it was four-on-three, meaning plenty of open ice, but no one could have anticipated how much open ice Lemieux was about to receive. Not even Lemieux.

When the Penguins gained the Edmonton blue line, Lemieux and Bouchard crisscrossed awkwardly, leaving Bouchard with the puck on the left side and Lemieux on the right, exactly the opposite of the plan.

"I looked at Mario, and he looked back at me," Bouchard said. "We got inverted, but I could tell right away that he just wanted all of us to stay where we were."

The Penguins stayed put, but so did Edmonton's penalty-killers, and that hurt the Oilers. Center Marty Reasoner was the lone forward, and he continued to follow his assignment of favoring the right side, where Lemieux was supposed to be.

"I think they got mixed up for a second," Lemieux said. "They thought I was going to be on the other side to set up, and they kind of sat back a little too much."

Bouchard sent the puck to the right boards, where Lemieux and left winger Rico Fata nearly collided. Fata caught the pass but instantly dished to Lemieux.

"That was a hot potato for me," Fata said. "I just wanted to give it to Mario, get out of his way and go to the net."

Lemieux took Fata's pass and stopped above the right circle, the clock seemingly freezing with him. He looked at his teammates, took one stride forward, put his head down and unleashed a powerful slap shot that zipped between Fata's legs and landed inside the far post behind Edmonton goaltender Tommy Salo at 1:35.

Those who were on the bench at the time shared in the praise.

"You give a normal guy that much time and space, maybe someone else would crumble and just dump it into the corner or something," left winger Steve McKenna said. "Not that guy. We all knew where it was going."

The opposition chimed in, too.

Lemieux laughed when asked if he spotted an opening behind Salo.

"I saw short side and went far side," he said, failing to stifle a grin. "No, I saw the far side. I got lucky."

Lemieux's overtime goal was the 11th of his career, and he ranks third among active NHL players in that category. But it was his first since Feb. 21, 2001, in a 3-2 home victory against the Florida Panthers, which explains his jubilant celebration with teammates in the moments after scoring.

Bouchard felt as much relief as joy.

"I'm just glad it all worked out," he said. "Whatever it takes to get the puck on Mario's stick in that situation, that's fine."

As promised, a few remarks:

• I've got a very specific reason for choosing this piece from my days on the NHL beat at the Post-Gazette, and it's got not all that much to do with the goal itself.

When this OT started, I left my seat in the Mellon Arena press box to go stand in one of the two steep, exposed stairwells to either side. This way, I'd have a better view, a better feel if the Penguins would score. So I was pretty much overhead, not all that far from Lemieux's own perspective at the right point when those lousy Oilers thought it'd be smart to offer him an acre of ice from which to pick his spot on poor Salo.

And that, of course, is what he did. He spotted the space inside the far post and, as MacTavish elegantly put it, he 'hammered' it, 'pulverized' it.

Which made no sense to me. Even as someone who'd marveled at all of Mario's career. I mean, he'd played a fair amount of point on the power play but, as described in the piece above, that was almost always on the left side. And yet, he glides forward, sizes up Salo, sees something, and blasts it by him like he's Al MacInnis.

Sorry, that made no sense to me.

Wait, here comes the other part where I sound stupid: So I hurry down to the locker room afterward, interview all the people you see up there -- with a focus on Bouchard to explain why they'd switched points -- then waited with the usual group for 66. At which point I ask maybe the dumbest single question of my career: "Did you see something far side?"

To which Mario jabs back with what you see above: "I saw short side and went far side," before pausing, grinning and finishing, "No, I saw the far side. I got lucky."

I was still fairly new to the beat and, damn, I wanted to die in that moment. To just drop dead.

We get back upstairs, Dave Molinari and I, and I finally summon the courage to ask Dave what had just happened down there. And Dave, who'd covered nearly every game Mario had ever played, came back bluntly as ever: "I think he got tired a long time ago of being asked if he meant to do what he just did."

Two powerful lessons were learned by the young reporter on that night:

He was the best at absolutely everything, and there wasn't anything on the ice he couldn't do.

Across the board, across all sports, I'd always presume after that event that a truly great player was eminently capable of whatever I'd just witnessed. And I applied this beyond just the Pittsburgh teams or the obvious candidates like Sidney Crosby, Evgeni Malkin, Ben Roethlisberger, Andrew McCutchen and so forth. I applied it to the other guys, as well. So when Rob Gronkowski steamrollered the Steelers, despite Sean Davis blanketing him, Gronk was the one who'd get my benefit of the doubt. When the Penguins lost their three-peat chance against the Capitals in 2018, I saw it far more from the perspective of a terrific Washington team that wound up finally winning it all. When the Pirates' 2014 wild-card team was wiped away by Madison Bumgarner, I was more moved by his performance than that of the home team. Because he really was that great.

• Yeah, I tried to find a video of this goal. Couldn't. Anywhere. If you turn one up, give a shout in comments, and I'll try to add it.

• There really wasn't much room there. A defenseman who'd spent his whole career shooting from that spot, you'd expect to be able to nail it. Not a forward.

Sorry, there I go again.

• What makes Mario the greatest player who ever lived is precisely what's above: He could do almost everything better than most everyone. Big, fast, supremely skilled, vision without parallel, and a comparable drive to prove all of that. In hockey terms, he had uncommon grace and elegance on his skates for a big man, Wayne Gretzky's vision and passing, and a finishing touch to match. Gretzky had only the middle of those three.

Viktor Tikhonov, the legendary coach of the old Soviet teams, labeled Mario 'the greatest goal-scorer I've ever seen,' and it seemed to jar people at the time. This was in 1987 after Mario and Gretzky took down the Soviets in the historic Canada Cup final in Hamilton, Ontario, with 66 scoring the winners in the final two games, both on assists from 99. Most of us had thought of Mario as a passer first, maybe because it seemed unfair that he'd also come equipped with the same ability to finish.

No one's ever been better at this sport.

• Man, my remarks about the piece are longer than the piece itself!

Back to wishing for actual hockey soon!