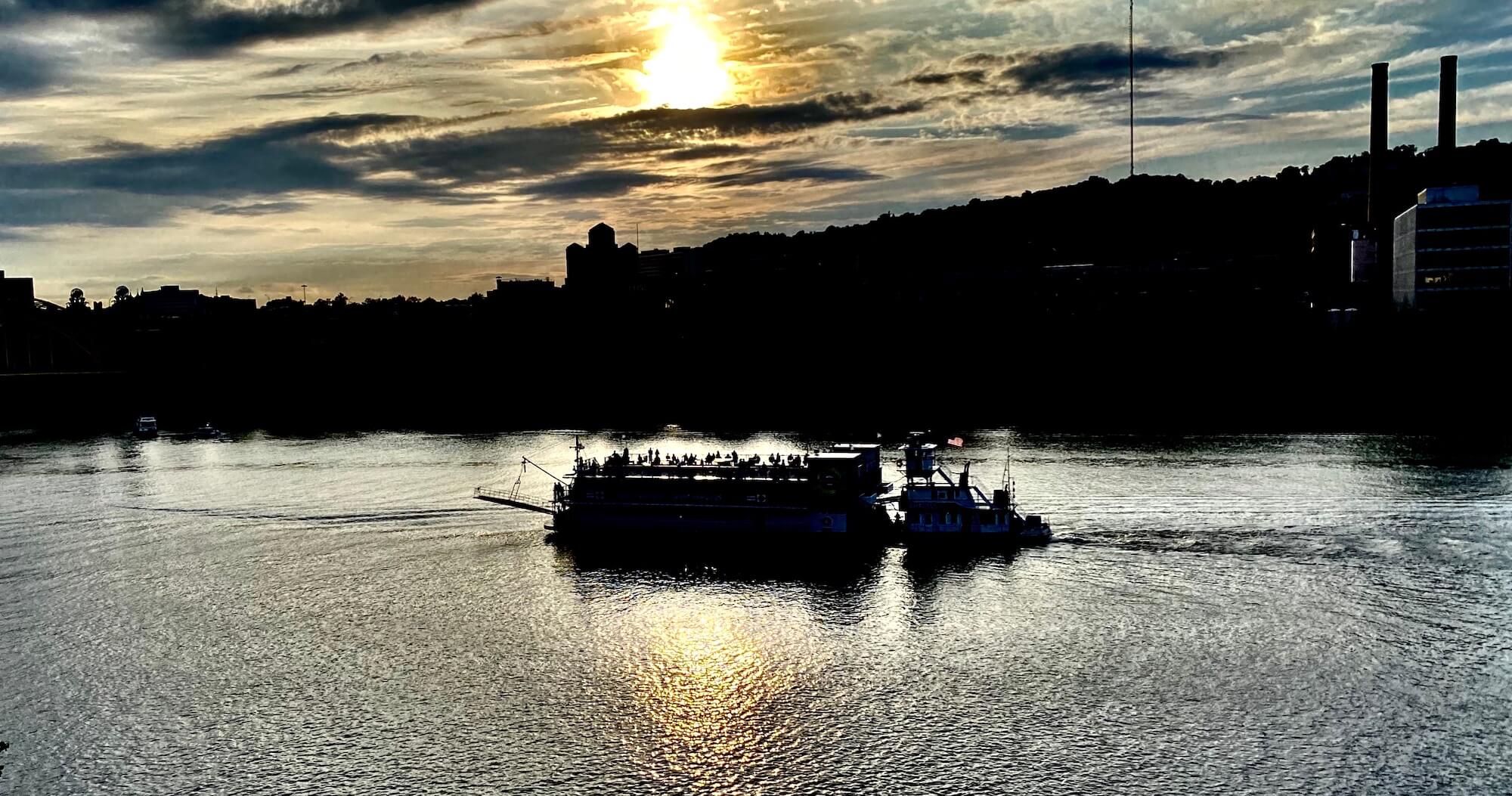 The sun was setting on another Saturday here in the Strip, and I'll confess to have two deep, deliberative thoughts while watching this:

What, you were expecting Keats or Yeats from the resident sports scribe?

No, really, the Empress from the Gateway Clipper Fleet coasted by my place, just as the skies were accommodating the lucky iPhone 11 snap I pulled off up there. Some safely spaced-out passengers were atop the boat, a strain of Spandau Ballet was making it to my shore, and a soft breeze made everything seem, for the moment ... semi-normal.

That's where we are right now, isn't it?

And you know, I'm ready to live with it. Even as I'm ready to embrace this emerging environment in which we need to take steps -- all of us, everywhere -- to ensure more of us don't die from it.

Understand this: Coronavirus isn't back. Rather, it never left. It really just meandered about the country, mostly toward the South ... 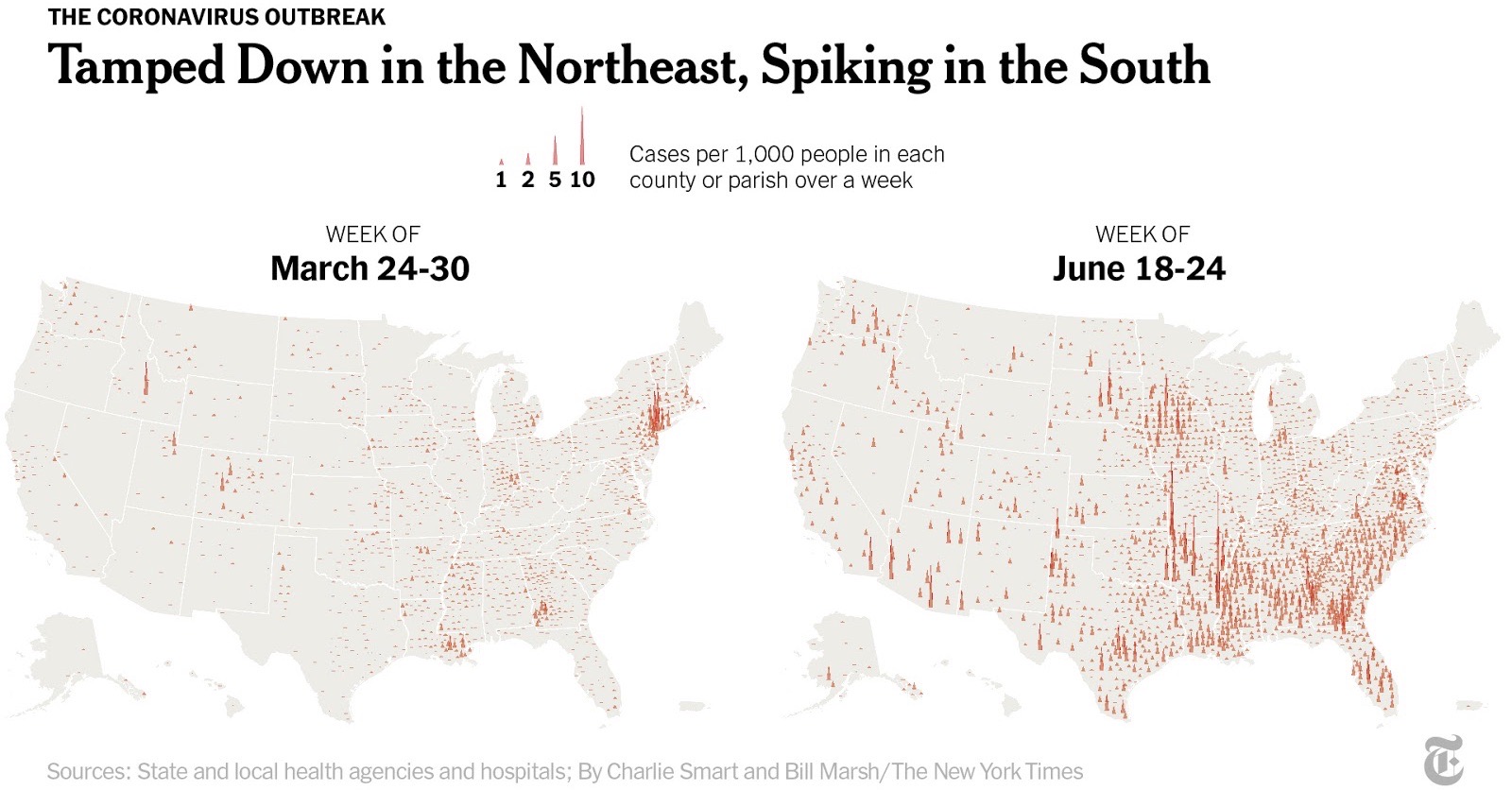 ... while also, and most unfortunately, picking up a broader steam that's even bigger than what initially besieged New York: 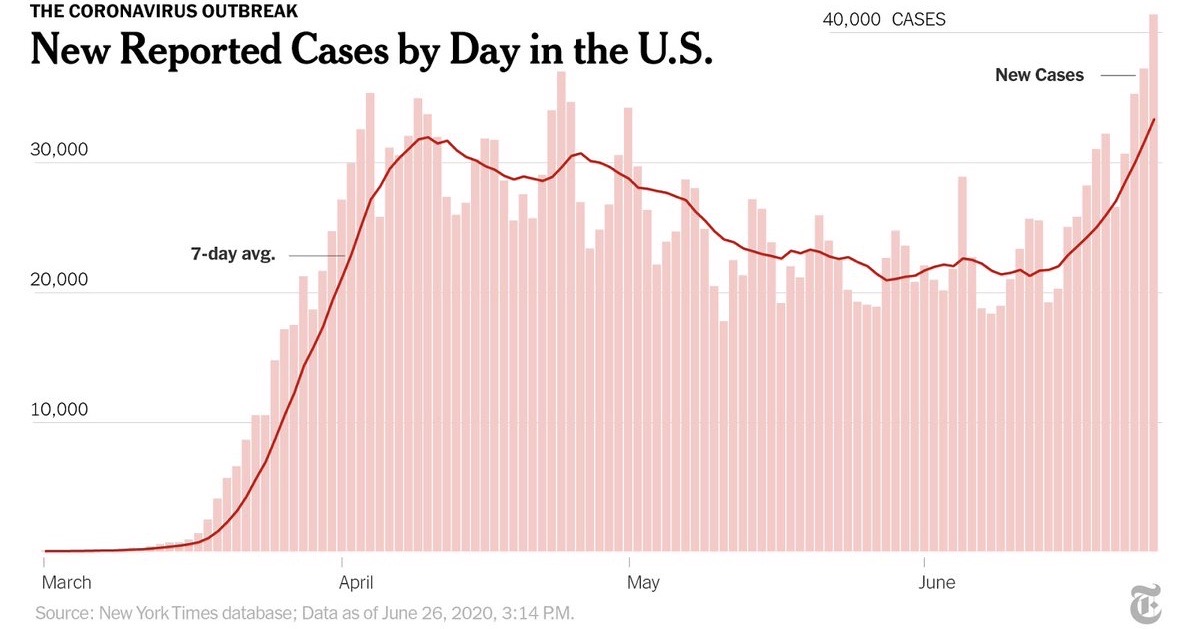 It's scary stuff. And I'm not here to diminish it in the slightest. Especially not with the United States now embarrassingly standing alone in global spiking -- we have 3 percent of the world's population but 25 percent of all cases and deaths -- and especially not with Florida still being attached to the union: Of the single-day record 45,942 cases identified yesterday, a mind-blowing 9,585 came from the Sunshine State.

That's not going away easily. California, Arizona and Texas are seeing spikes, too, but nothing approaching Florida's. And given that Florida dug its own hole more than any other -- opening absurdly early and doing next to nothing to discourage packed beaches -- it's safe to presume that Florida will keep right on Florida-ing for the foreseeable future. With all the older folks down there, that's outright terrifying.

But hey, let's presume the best, if only for argument's sake. Let's presume that Florida's governor, Ron DeSantis, flips the switch from OUTRIGHT IDIOT to MODESTLY MORE INTELLIGENT. Meaning, you know, not the nonsense he spoke to reporters in Fort Myers a couple days ago about how mandating masks in public spaces is 'probably gonna backfire.' Whatever that could've meant.

For all our readers in Florida and for all the friends I've made in the Bradenton area, I'm pulling for a frontal lobotomy for this guy and, above all, the very best for all of you. Be smarter than him.

We all can do that. Meaning being smarter. We all must do that.

That applies here at home, too: 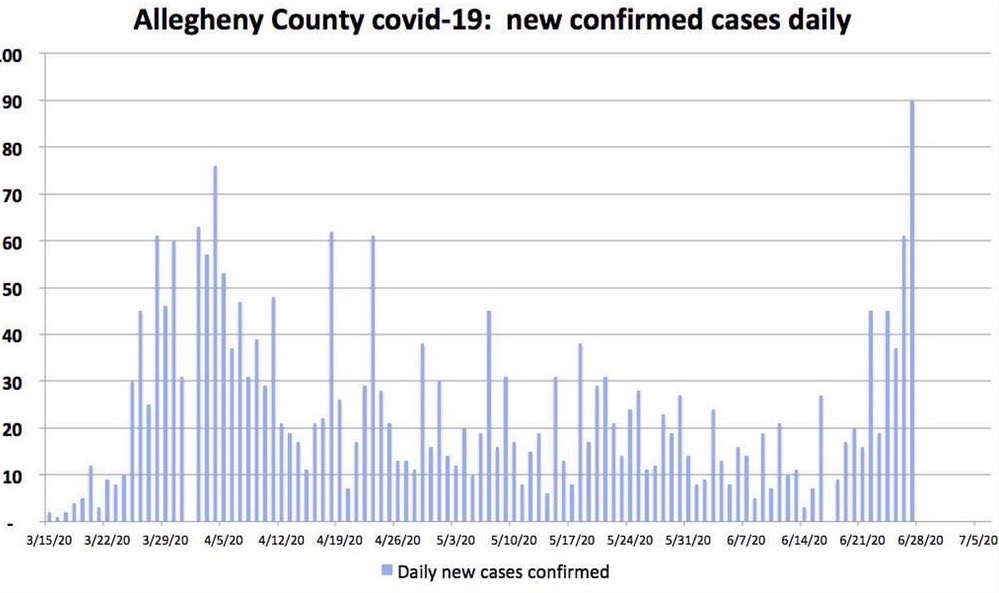 Apologies if this comes off as parochial, but this infuriates me.

Pittsburgh's been spectacular through this crisis, and the last thing we deserve is to pay for other regions' collective stupidity. In explaining the spike yesterday, the Allegheny County Health Department specified that the 244 cases for the week were “overwhelmingly” among younger people who'd been traveling or visiting bars. The department didn't point the finger at Florida, but half of the six cities they identified through tracing -- Myrtle Beach, Houston, Nashville, Miami, Tampa and Naples -- are down there. And for the record, Houston's getting as bad as Florida.

But what can we, meaning both Pittsburghers and Americans, do about it?

Are we going to stop traveling?

Shut everything back down?

Set aside politics and agree on a common approach?

We are what we are. We aren't going to change much. And as such, at least from the perspective of this non-expert, non-epidemiologist, here's what that maybe should mean moving forward:

The University of Washington this week issued a study that projected we'd cut 31 percent of all deaths if everyone simply wore a mask in public settings. Seriously. Independent of all other social distancing. Just the mask, and we'd whack the fatality rate by a third.

If you think it's macho or that it's some political statement to not wear a mask, that's equal parts dumb and self-absorbed. And inane. It's not about you. It's about others. If you don't care about you, so be it. Care about your fellow Pittsburghers, your fellow Americans.

When you see someone in a setting not wearing a mask where one's required, don't stay silent. Don't go picking a fight, either, but make it known in a safe way. Tell a store manager or security guard. If it seems like it wouldn't escalate -- and I do this myself -- just share a kind reminder.

Nothing works with children like peer pressure. And make no mistake, the people behaving this way are children.

Don't allow it to be OK. Because it isn't.

3. Do everything else, too.

Wash hands. Avoid touching the face. Stay 6 feet apart. Sneeze into your elbow. Steer clear of excessively packed places. One common mistake that experts decry is people mistaking the mask as some panacea. It isn't.

And hey, really, isn't a lot of this just instinctual behavior at this stage, anyway?

Now, all that said, yeah, go live your life.

It couldn't be clearer that both things are very much possible, if only for the precedent we've set here in Pittsburgh. Evidence is overwhelming, in our city, in other responsible places in our country, and in responsible countries all over the world, that this crisis is eminently manageable.

To start, the treatment of coronavirus is improving by leaps with each passing week. Everyone gets all jacked up each time a potential vaccine makes a headline, but treatments are almost as important, and they're already out there. Carriers are less likely to be hospitalized, those hospitalized are seeing less severe symptoms, and ventilators have gone from vital to largely unwanted. Lessons have been learned.

“We see all of this as evidence that COVID-19 cases are less severe than when this first started,” Dr. Donald Yealy, the chair of emergency medicine at UPMC, said this week.

That's a big bleeping deal. And anyone downplaying it likely is doing so because they're worried about sending the wrong signal to the DeSantis-level Einsteins, as if that's cause enough to be deliberately dishonest.

We could start by investing a gazillion dollars into our existing nursing homes and long-term care facilities. This floors folks when they learn of it, but 43 percent of all Americans who've died from coronavirus have been in these homes. In Pennsylvania alone, it's 68 percent. And I'm sorry, but this is criminal. It reflects terribly on the commonwealth's leadership, from Gov. Tom Wolf on down, every bit as badly as the national embarrassment reflects on the federal government's leadership, from President Donald Trump on down.

(Unfortunately necessary side note: If you're viewing a global pandemic through the prism of party-on-party politics, get a grip. Some things really do mean more. When you're on pace to lose more Americans than in World War II, the blame is universal.)

If we, as a commonwealth and/or country, invested an infinitesimal fraction of what's being lost daily to economic damage into these nursing homes, we could slash that fatality rate. Do whatever's necessary. Clean them as if preparing for a NASA launch. Fit the workers for hazmat suits. Treat it like the colossal crisis that it is.

We can make that difference. We also can, in general, take greater care of our elders, wherever they are.

The median age of someone dying from coronavirus is currently 75.3. That doesn't make it any less tragic. My mom just celebrated her 76th birthday last week, and we're hoping for a bunch more. But it does offer us greater guidance on which cross-section of society requires the greater caution, the greater care.

People with immune deficiencies or diseases such as diabetes -- I'm in the latter group -- also are more prone to suffering meaningful effects from coronavirus. So yeah, maybe I'm a little more guarded than most in using my undershirt to turn doorknobs and that sort of thing.

We know these things now, way more than we did in early March. So again, we can make that difference.

But it doesn't have to stop us. Or sports, for that matter, since the athletes will be competing within what literally will be the safest spheres on the planet. Or going for walks in the park. Or going shopping. Or dining out. Or seeing our relatives, including the eldest.

Look at the Florida mess, don't do anything like what the dope down there's doing, and we'll all be fine.

If not, maybe Bugs Bunny had the right idea: