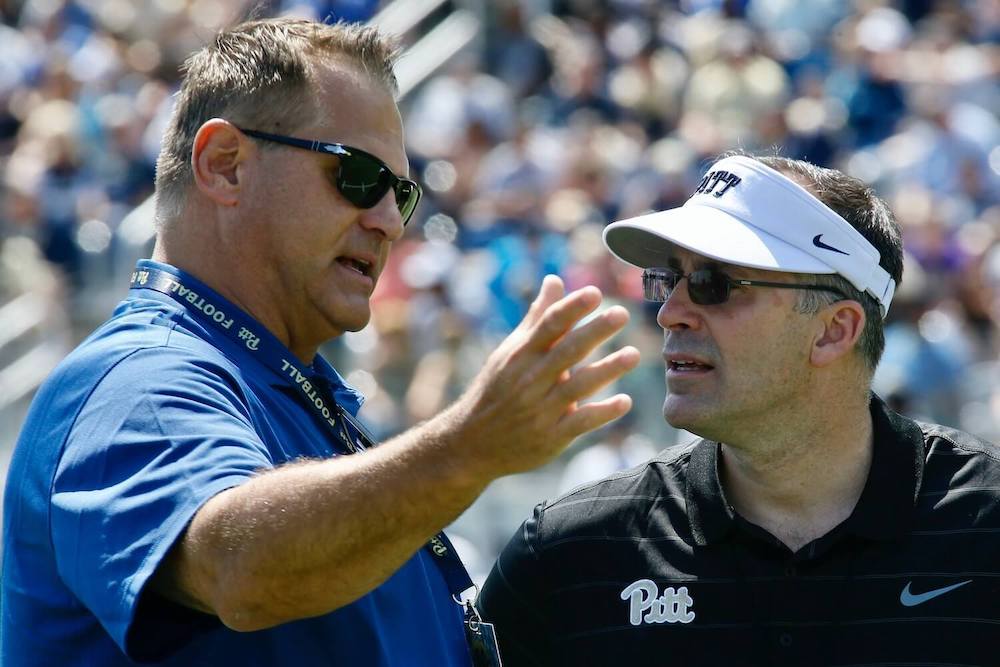 Two things took place in 1980 that altered the course of Jimbo Covert's life.

Covert started spring practice that year on the defensive side, where he had been since arriving since 1978, but Moore saw something in the Beaver County product -- Covert was a standout two-sport (football, wrestling) athlete at Freedom High School -- and wanted him to make the switch.

"I played offensive line in high school, but that was something totally different at that point," Covert told me Monday. "I was reluctant at first, but it was an opportunity. After the first practice, Joe Moore said, 'You're going to be an All-American some day.' I owe all my success to him. He made me the player I was."

As usual, Moore, who died in 2003, was right. Covert did end up being an All-American offensive tackle at Pitt.

As a junior in 1981, Covert earned first-team All-America honors from Football News and Newspaper Enterprise Association. A year later, Covert was a consensus All-American, played in the Hula Bowl and Senior Bowl and was selected by the Chicago Bears -- coached by another Pitt all-time great in Mike Ditka -- with the No. 6 overall pick in the 1983 NFL Draft.

In Chicago, Covert was a Super Bowl champion -- a key cog for the 1985 Bears, one of the great teams in the NFL history. He was the NFL Players Association Offensive Lineman of the Year that season, a four-time All-Pro selection and named to the league's All-Decade Team for the 1980s.

Exclusive Look: HOF President David Baker calls Jim Covert to inform him that he has been elected to the Hall of Fame moments ago. #PFHOF20 | @ChicagoBears pic.twitter.com/scCHZzaffz

The 60-year-old Covert got the long-awaited call in January, when he was informed he would be part of a special 20-member Centennial Class of 2020 to commemorate the NFL's 100th season. Steelers safeties Donnie Shell and Super Bowl-winning coach Bill Cowher also are part of the Centennial Class. Troy Polamalu was selected as part of the regular class in his first year of eligibility. The Steelers and Cowboys were scheduled to play in the Hall of Fame Game on Aug. 6.

It was going to be a weekend to remember in Canton, Ohio, for Pittsburghers, and Covert was ready to bask in it.

"It would have been great," Covert said. "I told Donnie Shell how I always looked up to him and the Steelers growing up. Franco Harris, Joe Greene, Mel Blount, those guys are my heroes."

Covert even wore No. 75 in high school and at Pitt because Greene was his favorite player. Pitt retired his number in 2015.

Covert -- and the rest of the 2020 Pro Football Hall of Fame class -- will have to settle for something else: waiting until next year for induction.

Concerns over the coronavirus pandemic caused the cancelation of the Hall of Fame Game and postponed the enshrinement ceremony until 2021, when it will be combined with next year's class into a long weekend of football festivities.

"It's disappointing for sure," Covert told me. "The Class of 2020, we got to know each other a little bit, and we were looking forward to celebrating together, but it's the right thing to do with all the issues caused by this pandemic. It's definitely the right thing to do."

And Covert owns a unique perspective on the COVID-19 pandemic. He works in the healthcare business, a field he's been in since retiring from the NFL in 1992 after missing the '91 season because of back surgery.

Plus, he lives in Florida, where cases recently have spiked.

So, the member of the College Football and Pitt Athletics halls of fame is more than OK with waiting another year.

"We have to be cautious, obviously," Covert said. "I've never seen anything like it in the healthcare business."

"I actually started on (my speech) when we were in limbo with all the (coronavirus) stuff, but I kind of put it aside for now," he said.

Because so much will be packed into next year's Hall of Fame weekend, Covert figures Centennial Class inductees will be asked to limit speeches to eight to 10 minutes.

He wants to make certain he thanks all the necessary people, from family to his hometown crew to Pitt teammates -- Moore made Covert room with another Hall of Famer in Russ Grimm -- and coaches to those around during his time with the Bears.

"Playing at Pitt at the time I played, let me tell you, it was something special," Covert told me. "Great players, great coaches, the stadium was filled with Pitt fans. You were expected to win. If you didn't, it wouldn't be a pleasant week, but we didn't have to go through that very often."

You know, the team that did the "Super Bowl Shuffle" and backed it up by outscoring opponents 91-10 in the postseason. The team with arguably the most famous single-season defense of all-time and legendary running back Walter Payton.

"There's a sentiment out there that the '85 Bears have the greatest defense, and I agree. I believe it," Covert said. "But people took our offense for granted. We didn't get the respect it deserved. We led the league in rushing, time of possession, first downs. That helps make a defense pretty good. We led the league in rushing four years in a row. That has never happened since, and it only happened once before us."

"I'm just the same person as I was before, except now it says Hall of Famer in front of my name."