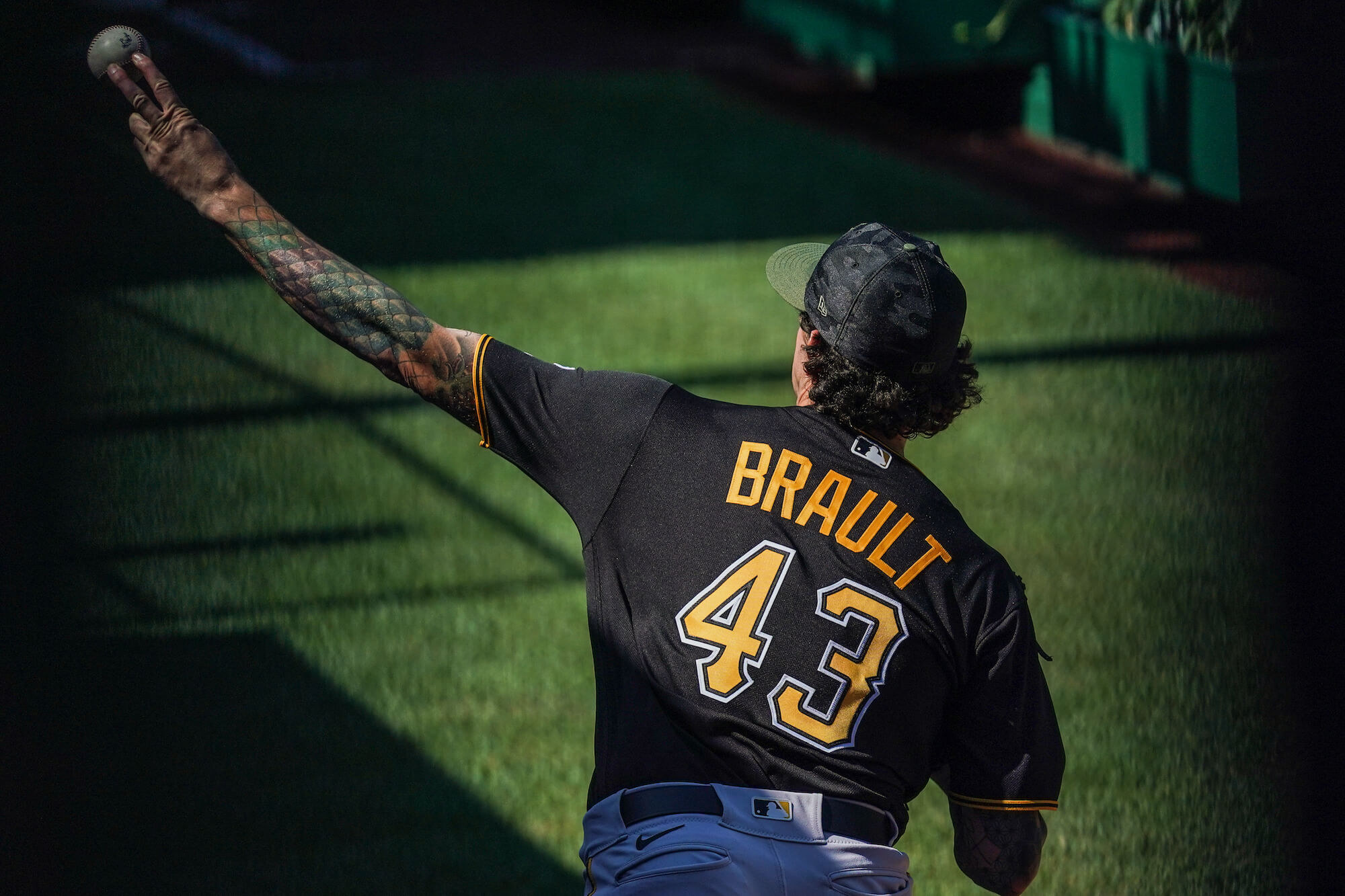 PITTSBURGH — Derek Shelton has said the Pirates could be “aggressive” with their fifth spot in the rotation, and that can include piggybacking starters.

Derek Shelton has a good idea who four members of his rotation are going to be. While he hasn’t named names, going based on the people in camp, it seems very likely the four he is referring to are Joe Musgrove, Trevor Williams, Mitch Keller and Derek Holland, based on their standing in the organization and the work they did during spring training in Bradenton, Fla..

The fifth spot is undetermined, with the most experienced candidates being Steven Brault and Chad Kuhl. Brault was arguably the Pirates’ best starter for half of last season, and Kuhl had established himself as part of the rotation before missing the 2019 season recovering from Tommy John surgery.

However, the first-year manager has not committed to a normal five-man rotation, especially in a drastically changed season structure. Shelton has said the Pirates could be “aggressive” with that fifth spot instead.

One of those aggressive options they are exploring is having Brault and Kuhl be “piggyback” starters, or have both go several innings in an outing.

During a Zoom call Monday, Brault said Shelton has talked to him about potentially sharing the fifth spot with Kuhl.

“Kind of depends on how these next three weeks go, just like spring training where you never know what’s going to happen before the season actually starts,” Brault said. “So just kind of right now it’s just playing it by ear and as we get closer it’ll get more concrete with everything that is going to be happening.”

Nothing has been decided yet, and Brault said he could still go back to a more traditional starter or reliever role. Brault has done both in his time in the Majors. Kuhl has only been a starter.

The idea of piggybacking starters has been tossed around by the analytical community for a few years, and while teams have experimented, it is still very uncommon. Traditionally, pitchers tend to struggle during their third trip with the lineup. Piggybacking would limit the number of batters each pitcher faced, and possibly eliminate those trips the third time through.

Pitchers usually have a predetermined number of innings they will throw that day. If they fail to get through an inning, teams will usually go to a reliever instead to close out the frame, giving the next “starter” a clean slate.

“In the minor leagues, it’s not that uncommon,” Brault said about the process. “If that’s what we end up doing, it’s not going to be too weird.”

Piggybacking would also allow the Pirates to monitor the innings for both of their pitchers. That is important for Kuhl coming off his Tommy John. While teams want to make sure that pitchers coming off the surgery do not throw too many innings, they still need to throw a certain amount to build their arm strength back up.

Shelton added the Pirates are looking at other piggyback options besides just Brault and Kuhl.

Jacob Stallings heaped praise onto Kuhl Monday, using terminology like “nasty,” “filthy” and “just gross” to describe his stuff during summer camp. He said he though Kuhl was a little “tentative” coming back from the surgery during spring training, but he is looking more like himself now since he has returned to PNC Park.

Brault is coming off a spring training left shoulder strain, which was expected to keep him sidelined for the original start of the regular season in March. He had an identical injury in 2019, making him miss a month.

While he said he could be stretched out to being a full length starter before the regular season starts on July 24, so far he has maxed out at only throwing two simulated innings. Musgrove and Williams, by comparison, have already thrown five-inning outings.

As expected, Brault is approaching the possible new role by focusing on what’s good for the team and good humor.

“I’ve done the bullpen thing. I’ve done the starting thing. So I might as well try doing something that’s in the middle,” he joked.

• Tucker takes hint: ‘Don’t mess this up’
• Pirates’ schedule front loaded with challenges
• Test slowdown affects Altoona
• Keller looking to be more efficient
• ‘It won’t be the same’ without fans in stands

I always thought a piggyback might have worked with Charlie Morton and Jeff Locke, assuming Morton got through his first inning

This might make sense. Two different looks for the hitters. Plus it could save the rest of the pen. Lot of ifs here though.

In football, when the QB position is a platoon situation – that means there’s no clear capable starter, which is the case here

The Pirates could pull some little league shenanigans, especially with Brault since he’s a better hitter than a couple of projected starters. Pitch him a few innings, then move him to the outfield or DH, then switch him back later. It could work…once. 😂

Can a pitcher pitch and DH during the same game?

I think so. It’s called pitching in the National League. Until recently

Like this Idea with brault and a righty or any other lefty/righty piggyback combo. Forces the opposition into worse matchups longer and burning through their shorter bench if they start pinch hitting. May keep from taxing the bullpen everyday too.

If these two can keep the 5th starter a 0.500 W-L position, it will be a huge victory for the team. Considering the help at Indy, this spot is a big deal.

Does piggy backing them rest the bullpen? Can they go 4 innings each? Maybe twice thru the line up.

I have a great idea. Dont pitch Brault at all. I don’t understand the fascination with him. When will they figure it out. Its another Josh Fogg, Jeff Locke type thing. Please don’t waste a spot with him.

I like both guys. One of Brault’s problems is that he needs too many pitches to get three out, and thus about 4-5 innings in, he’s close to his max. So using an approach of piggy-backing the two makes sense to me, since it gives both pitchers some extended time, but not enough where batters can adapt to them in a lineup. I’ve always been a fan of both and look forward to seeing them in this kind of role.

I’m not a stathead but I seem to recall that Brault was basically their best starting pitcher later in the season and his peripherals in later innings were better than earlier innings.

Great kid, counselor. Hope Brault is up to the task this year.

no kid. Check his stats.

Why not? No better scenario than a shortened season to experiment a little.