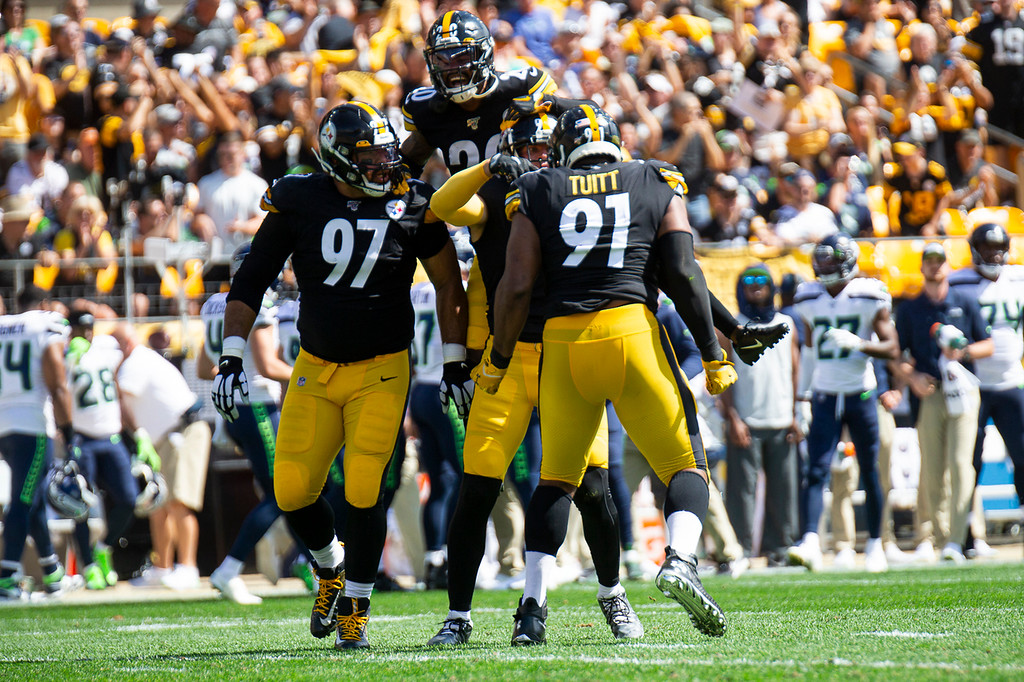 The Steel Curtain defense of the 1970s was a pure 4-3, relying on its defensive linemen to stop the run and harass opposing quarterbacks into mistakes.

The linebackers were largely used in coverage in addition to cleaning things up in the running game.

But as the stars of that Steel Curtain defense began to retire, Chuck Noll was faced with a dilemma. Picking at the middle or lower in the draft for years and the Steelers' loss of their advantage of being one of the few teams to mine historically black colleges for players -- thanks to the scouting of Bill Nunn -- the team couldn't keep playing the same way it had.

Noll, whose defensive schemes had been by plenty of other teams, decided it was time to do a little copying of his own. Bum Phillips had introduced the 3-4 defense to the NFL in 1974 with the Oilers as their defensive coordinator.

Noll saw that instead of needing four talented defensive linemen, he could switch to the 3-4 and take advantage of the larger number of undersized college defensive ends and linebackers, which were easier to find than skilled 300 pounders.

Bill Cowher kept the 3-4 when he became head coach in 1992, not surprising since that was the scheme he had used with the Chiefs as defensive coordinator. But when Mike Tomlin took over for Cowher in 2007, he too kept the 3-4 in place despite having coached a 4-3 as an assistant in both Tampa Bay -- which was a direct copy of the Steelers' '70s scheme -- and with the Vikings.

What's to be gained from that kind of continuity? Plenty, especially in a season in which teams won't have the practice time they've enjoyed in previous years.

Matt Williamson, my partner on Steelers Nation Radio, was a scout with the Browns in 2004. He began the season with Butch Davis as the team's head coach.

Davis employed a 4-3 defense. But he was fired at midseason and replaced by assistant Terry Robiskie on an interim basis.

Then, when the season was over, Romeo Crennel was hired as the team's new head coach. Crennel ran the 3-4.

So in the span of a year, Williamson had gone through three head coaches and went from scouting players to play a 4-3 defense to looking for players who fit in the 3-4.

This is not unusual for the Browns, who have had 12 head coaches since 1999.

The lack of continuity doesn't just affect what happens on the field. It trickles down to the scouting departments and everything the teams do.

But for the Steelers, little changes. Most of the scouting staff has been in place for decades, starting with GM Kevin Colbert, who has been with the team since 2000.

They know exactly what kind of players the coaching staff wants because it's been the same thing for which they have looked the entire time they've been employed.

Sure, there have been subtle changes. When Keith Butler took over as defensive coordinator, he decided he wanted to take advantage of the pass rushing skills of defensive linemen Cam Heyward and Stephon Tuitt. So, the defensive ends aren't just eating up blocks any more, like they did when Dick LeBeau was coordinator. Now, they're getting upfield.

And with the changes in the way the game is now played, the emphasis on having big run stuffers at nose tackle and inside linebacker isn't as important as it once was. Today's NFL game centers on the passing attack, so inside linebackers better be able to play in space.

The nose tackle spot? The days of a two-down run stuffer who isn't a factor rushing the passer are gone.

"That position won't be manned in the way Casey Hampton manned it years ago," Tomlin said recently. "As a matter of fact, today's game doesn't require that you man it in that way. It was a heck of a lot more base defense back when Casey played. Guys like him were really significant. The amount of running the football in the league at that time and more important the style of running, the double teams and so forth. It made guys like Casey not only necessary, but significant. That guy was a perennial Pro Bowler for us and really a catalyst for a great defense. I just think it's made up a little differently these days. There is probably more of a premium on those who rush the passer. As much as we love Hamp, we know that pass rushing was not his forte."

But the Steelers also won't be counting on any "new" starters at any spot in 2020, either offensively or defensively.

Nose tackle Javon Hargrave, who left in free agency, will be replaced by Tyson Alualu, who has been with the team for three years. Longtime starter Vince Williams will see an increase in playing time at inside linebacker after Mark Barron was released in the offseason after just one season with the team.

On offense, the only new face who could see significant playing time could be at guard to replace retired Ramon Foster. Right tackle Matt Feiler will get the first opportunity there, but veteran Stefen Wisniewski also was signed to help ease that loss, even though he's not being counted on as a starter.

Compare that continuity with the other teams in the division and it's not even close.

The Ravens, who won the AFC North in 2019, have an open competition at left guard to replace Marshal Yanda and new starters all over the defense including at two line spots and two linebacker positions.

The Browns have new starters at both right and left tackle, two linebacker spots and both safety positions.

Not to be outdone, the Bengals have new starters at quarterback, left tackle, right guard, wide receiver, nose tackle and two at cornerback.

Given the lack of practice time that will be available before the season starts -- and perhaps two or even no preseason games -- that won't allow a lot of time to develop chemistry.

Tomlin figures his team lost nearly 1,000 snaps they would have gotten in practice in the offseason. The process will be speeded up even more greatly once training camps begin.

But teams still won't be ready right out of the gate -- especially teams counting on players filling roles from outside their organization.

"We have concerns in that area, as I am sure everyone does," Tomlin said. "The physical reps are a teach tool and it levels the playing field once we get in training camp for new guys or young guys. Learning is going to be a significant element of this process, of this evaluation process that we are going to get into. Those who are slow learners, who lack the normal repetitions that you get in the spring are going to be working at a disadvantage. By the same token, those have been here and know what to do are probably working at a distinct advantage in this environment."

Count the Steelers, because of their continuity, in the latter column.