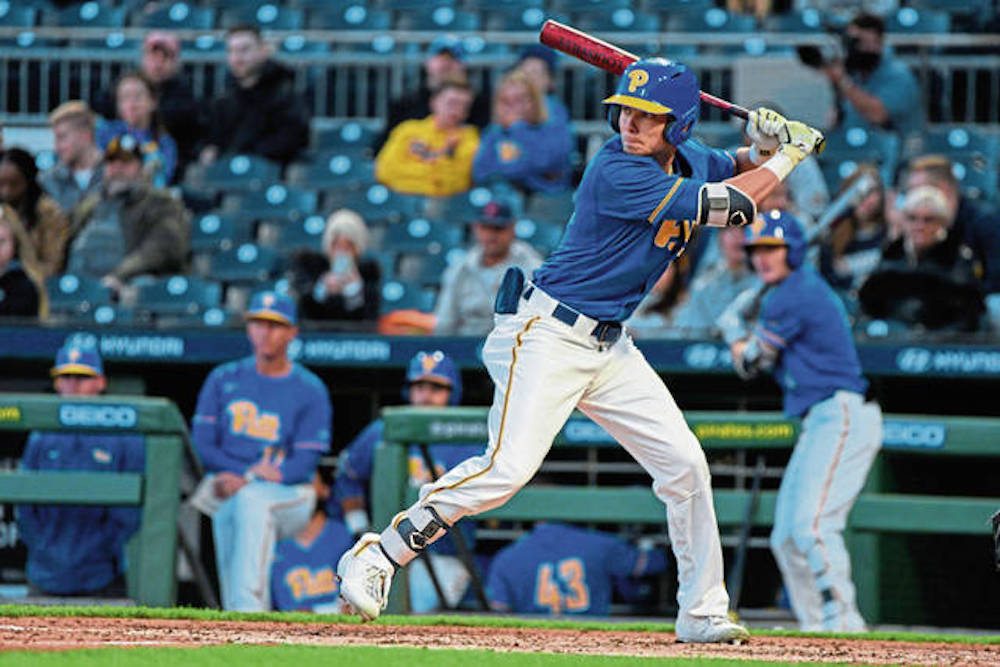 Connor Perry's backstory is a good one.

To briefly recap it, the former Norwin High School baseball standout earned a spot on the team at Lock Haven University only to be cut before the start of the second semester of his freshman year. He went to Lackawanna Community College and excelled there before landing at Pitt, where he put up monster numbers (team-leading 15 HRs, 13 doubles, 35 RBIs) as a senior.

Perry's story is a rags-to-riches one for certain, but it doesn't end there. Actually, it's only getting better.

After the coronavirus shutdown put a halt to the baseball season and before it put an official end to minor league play in 2020, Perry started taking live at-bats with good friend and Pirates first baseman Josh Bell. Andrew McCutchen and Neil Walker showed up, too. So did pitcher Derek Law, a member of the Rangers organization who played at Seton LaSalle High School.

Then, a few more of Perry's friends showed up. That's when someone pitched an idea.

"I think someone was joking when he said it, but they were like, 'Man, we should start up our own game,' " Perry told me Wednesday afternoon.

The idea snowballed. It went from playing a game to trying and form a two-team league for displaced college players, but, when it comes to Perry, ideas and ambitions only get bigger.

Not that everyone was on board. After all, starting up a league takes time. Health and safety concerns needed considering. Where would players come from?

"When someone tells me I can't do something, I'm going to do it," Perry said.

So what did Perry do?

Well, he got on the phone, made "about 500 calls" to area college coaches and players and some of the top graduating high school players, too. With the help of former Pitt assistant coach and AAB league president Dan Ninemire, Perry began putting together the All-American Baseball Collegiate League, a four-team outfit playing games at Pullman Park in Butler, Pa. The league was put together with fastball-like quickness, but it features some of the area's top collegiate players and recent high school graduates.

There's Nico Popa from Pitt, who was a second-team All-ACC outfielder in 2019 who has made 136 career starts for the Panthers. Vanderbilt's Troy Laneve (Pine-Richland) and recent Serra Catholic grad Mark Black also are on rosters, so are Pitt pitchers Tom Colcombe (Peters Township) and Jarett Bach (Yough) in addition to incoming Panthers players Dom Popa, Nico's brother, and Matt Tarabek (Hempfield), who is transferring to Pitt after three standout seasons at Fordham.

"One of the ideas behind this was, if we were ever going to come out of this (coronavirus pandemic), kids needed a place to play," Ninemire said. "We thought we could make it happen, but it's insane how quick it happened. (Perry) put together four teams in about a five- or six-day span."

The teams are the LV Lumber Bats (coached by Perry), Ark Basement Jackhammers, DynaSport and Shoff Construction Chuckers. Each plays a 28-30 schedule, and games take place Monday through Thursday through early August. It's a wooden-bat league with a universal DH.

The talent is strong and the competition can be fierce but friendly.

On Wednesday, Perry's Lumber Bats led the Chuckers by two runs in the ninth inning when Nico Popa hit a game-tying homer.

"When he rounded the bases, he had a couple words for me," Perry said. "But he's a good friend of mine."

Popa, Black and Tarabek are a few of the players in the league who likely would have been selected in the 2020 MLB Draft had it lasted more than five rounds.

So, with no minor league season, no Cape Cod League and a college schedule that barely got off the ground in the spring, options were limited. The AABCL offered opportunity and, just as important, exposure.

"We've had close to 20 pro scouts at a game and probably had a pro scout from every team at some point," Ninemire said. "It's great, because those scouts rarely get the chance to see (Division II) kids. Mix that with talented Division-I program kids and it makes for some good competition."

Even Bell and Law have stopped in to watch a practice.

"That's such a cool opportunity for everyone," Perry said.

@JBell_19 Josh Bell at our first work out helping out hitters. pic.twitter.com/VylrTlZuH6

Perry, who also serves as commissioner of the AABCL and one day hopes to explore a non-playing career in the sport, hopes to get another opportunity to play live baseball.

He was at spring training with the Tigers when players were sent home. Perry wanted to do more than just train.

"I felt something like this was my calling when I came home," he said. "It's an opportunity for guys to play. When I was in those shoes, I wanted to keep playing every chance I had. So now we've created an atmosphere with high competition, and it gives these guys a chance to play and be noticed."