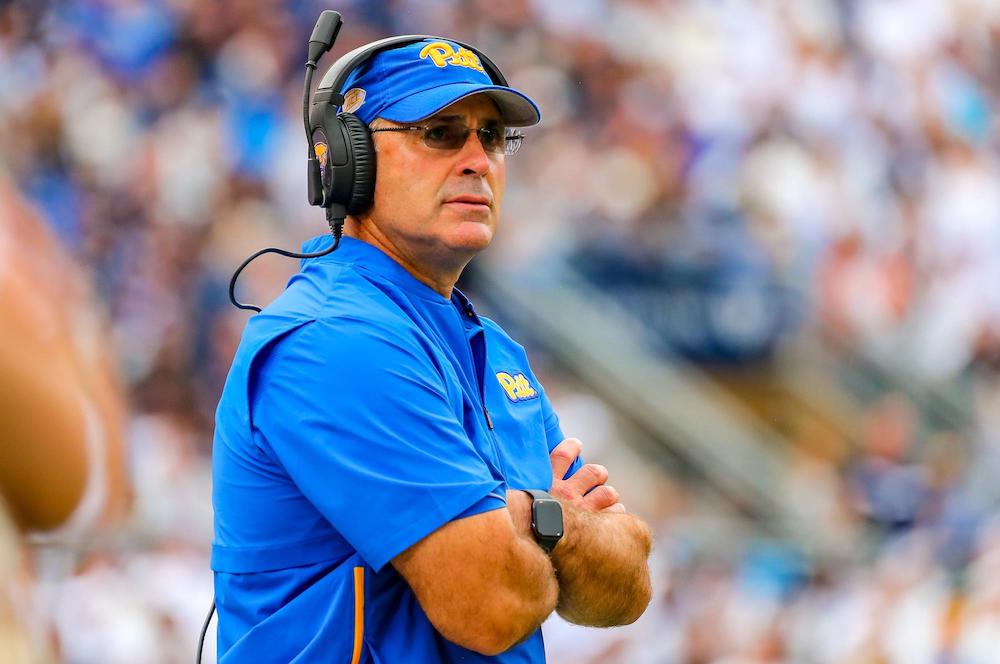 Pitt boasts a reputation for the improbable upset.

Panthers fans have the scores to those games memorized.

But for every season-changing upset Pitt pulls off, there's a longer line of heartbreaking, or at least headscratching, losses.

It's not a reputation to brag about, but it's one Pitt carries everywhere.

Pitt kicked off to Cincinnati's Mardy Gilyard just before halftime in the 2009 regular-season finale. The Panthers were dominating. Gilyard returned the kick 99 yards for a touchdown, and the Bearcats played Tim Tebow and Florida in the Sugar Bowl instead of the Panthers.

The Wikipedia page for the 2008 Sun Bowl (Oregon State 3, Pitt 0) is an adventure with a satisfying and surprising ending. pic.twitter.com/lcuaW4NkM9

There's the five fumbles in the first quarter against Georgia Tech in 2014, the loss to Youngstown State in Paul Chryst's first game as head coach and the slide game at UConn in 2004.

Sadly, the list could go on, but it's easy to see why Pitt fans are known as a self-deprecating, often-pessimistic bunch.

And not to pile on, but here's five reasons why the 2020 season could be troublesome.

When it comes to penalties, Pitt was one of the more undisciplined teams in the country.

The Panthers averaged 8.7 penalties per game last season, the third-worst total among Power 5 teams. Another problem is it's not just an issue with quantity. Many of those penalties came at a cost.

Pitt allowed 2.2 first downs per game via penalty and 888 total penalty yards in 13 games, an average of 68.31 per game. Defensively, targeting penalties were far too frequent. Not only is the team penalized 15 yards, the player called for targeting is ejected from that game and must sit out the first half of the ensuing game. It happened to safety Paris Ford twice last season.

If Pitt cannot diminish the penalty problem and play more disciplined football, it could prove costly.

Most penalties committed by power-five schools in 2019:

When defensive linemen Rashad Weaver and Keyshon Camp were lost for the 2019 season because of knee injuries, it looked to be a big blow for the defense. Instead, Pitt not only persevered, it thrived defensively.

But injury situations rarely turn out to be that fortunate, and Pitt looks thin at a few positions.

Pickett missed last season's non-conference win against Delaware because of a shoulder injury. Given the way Pitt played, had any other team besides Delaware been on the schedule, last season's final record might have been 7-6 instead of 8-5. Nick Patti completed 23 of 37 passes for 271 yards against the Blue Hens, but the offensive performance did little to inspire confidence.

If something happens to Pickett, it will be up Patti or redshirt freshman Davis Beville to lead the offense unless Joey Yellen, a former four-star prospect and a transfer from Arizona State, is granted eligibility.

Cornerback and linebacker also are position groups that lack experience past the starters.

In Pat Narduzzi's first season as coach (2015), Pitt compiled an impressive 5-1 road record, with the only loss coming by three points (27-24) at Iowa.

If Pitt's 2020 schedule holds, and all kinds of ideas being bandied about if it does not, it features a non-conference game at Marshall (Sept. 12) and ACC road games against Miami (Oct. 3), Florida State (Oct. 31), North Carolina (Nov. 14) and Virginia (Nov. 21). That's a difficult slate whether fans attend games or not.

Pitt's track record at tight end is a poor one, at least since Scott Orndoff exhausted his eligibility in 2016.

Lucas Krull, a grad transfer from Florida, is the latest in a line of potential solutions for the Panthers at tight end. And while Krull's nine catches in two seasons with the Gators isn't much to look at, he was playing behind Kyle Pitts, one of the nation's best at the position, and is as athletic as they come.

Pitt needs more -- or actually anything -- from the position in 2020 to be effective on offense.

Pitt had a great offense in 2016, but the defense struggled, particularly against the pass.

Pitt had a great defense in 2019, but the offense failed to put up points.

A lot of key players on both sides of the ball are back in 2020, but the offense needs to take several steps forward to help the defense out. If playing experience is a factor in success, the Panthers should be better offensively. Continuity could help, too.

Speaking of offense, it needs more balance, too. In Year 1 under offensive coordinator Mark Whipple, Pitt ranked eighth nationally with 513 pass attempts -- that's four more than Clemson in two fewer games. Meanwhile, the 6.63 yards per attempt was last in the country, meaning Pitt did not complete many passes downfield. Its 10.77 yards per completion tied with Western Kentucky for worst in the nation.

Pitt's 55.86 pass-play percentage was the 16th most last season. The Panthers averaged 33.2 rush plays per game, but its 114.8 yards per game was 14th worst in college football.

For an optimistic view on Pitt's season, tap here.