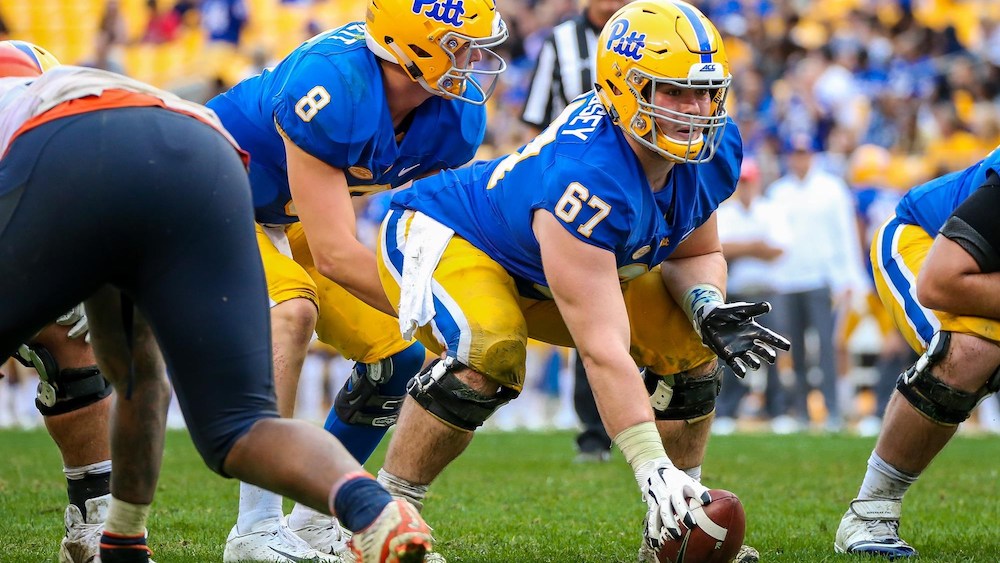 As it currently stands, Notre Dame is scheduled to play six ACC opponents.

Pitt hosts Notre Dame on Oct. 17, and the occasion is special enough for the Panthers to honor their latest inductees into the school's athletics Hall of Fame at some point before or during the game. Wake Forest, Duke, Clemson, Georgia Tech and Louisville also are on the Irish's schedule.

And with Wisconsin, Southern California and Stanford no longer on it because the Big Ten and Pac-12 conferences opted to go with a conference-only schedule for the 2020 season, there's talk the ACC will help Notre Dame fill openings.

Then again, there's talk the ACC could adopt a 10-game schedule with home-and-home series and Notre Dame being a part of things. At this point during the coronavirus pandemic, it's a guessing game.

But let's entertain for a moment that Notre Dame takes on an ACC-heavy schedule. If it happens, there's an area where the Irish clearly are stacked: Offensive line.

There's a reason why people are high on Notre Dame's chances in 2020, and it starts with the guys up front.

And here are five linemen from ACC member schools worth watching this season:

Darrisaw (6-5, 311) did not have an impressive offer sheet, choosing the Hokies over Central Connecticut State, Morgan State and North Carolina Central, but, in 2018, he started as a freshman at left tackle, making a mockery out of his recruiting process.

His run blocking came into question as a freshman, but, last season, Darrisaw evolved into a more complete lineman.

Checkout this clip from last year's 28-0 dismantling of Pitt:

Virginia Tech OT Christian Darrisaw (@Bigdawgchris1) has the makings of an NFL left tackle. Really good size, great length, and flashes of excellence on film. A very high ceiling for one of the best tackles in the nation. #NFLDraft #DraftTwitter pic.twitter.com/BcLWQqbtlD

Carman is the lone returning starter on the Tigers' offensive line, so the spotlight will shine brightly upon him, and the 6-5 345-pound left tackle.

He played 785 snaps over 15 starts in 2019 and earned third-team All-ACC honors. The junior has long arms and strong hands, keys to great pass blocking, but he excels as a run blocker, too. He's a decent athlete for his size and moves well in space.

Carman could be a first-round pick in the 2021 NFL Draft.

In the season opener vs. GT, Travis Etienne sets a new Death Valley record for longest TD run as he goes 90 yards to the house, thanks to outstanding blocking from his teammates including a monster block from Jackson Carman.#ALLIN pic.twitter.com/5kHnSszedG

Morrissey (6-3, 305) was a first-team All-ACC pick last season and not only considered one of the better centers in college football, but one of the sport's better interior linemen.

The former walk-on has made 36 career starts and did not allow a sack last season. He also plays with a mean streak, and Morrissey has drawn comparisons to a well-known center on the other side of UPMC Rooney Sports Complex in Maurkice Pouncey.

Morrissey was injured in 2018 against Wake Forest on a lineman lateral touchdown, and Pitt did not win a game after his injury.

Morrissey is viewed as a possible early round pick in the 2021 NFL Draft.

From walk-on to star center.

The Eagles fielded one of the ACC's better offensive lines in 2019. Boston College led the conference in rushing yards per game (253.2) and had the league's top rusher in AJ Dillon (1,685 yards). But the offensive front was more than big, tough run blockers, as they allowed just 13 sacks in 13 games.

Petrula is a big reason for the success up front, and players such as him give first-year coach Jeff Hafley a solid foundation to rebuild.

The 6-5, 320-pound Petrula has played center and both tackle positions while at Boston College, the type of versatility that could sit well with NFL teams.

Boston College's Ben Petrula is the real deal. He's an absolute mauler in the run game; a technical savant who makes the tough look easy. He's played a bunch of different positions and looks really comfortable pulling and kicking out in space. Here's a cutup at RT (#64): pic.twitter.com/WRSd582abD

Like Petrula, Johnson was a second-team All-ACC selection last season, and his presence arguably gives Boston College the best offensive line in the conference.

Johnson (6-3, 310), who played two seasons at Davidson before transferring, is athletic and displays patience. The left guard is solidified as a starter in 2020.

Boston College has a really talented offensive line. Watched left guard Zion Johnson who impressed. Extends his arms well and is a good mover in space. Plug in and play from day 1. Petrula and Vrabel also stood out. #NFLDraft #DraftTwitter pic.twitter.com/dpUwCIjR7a