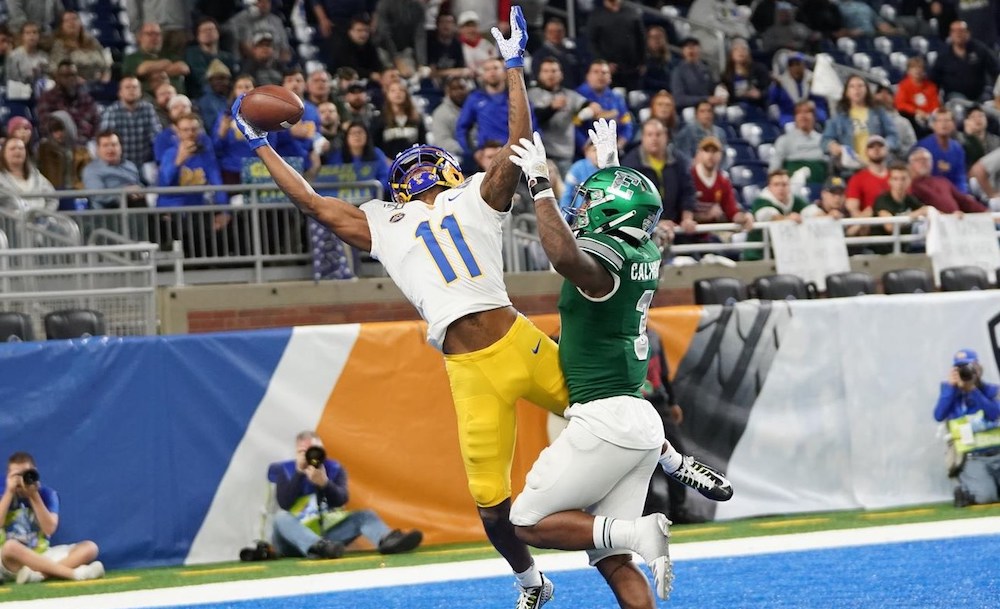 With more than 40 drops last season, Pitt's wide receivers might have been the weakest link of an ineffective offense.

Yet, an argument can be made the group was significantly improved from the year before.

Pitt passed for 3,402 yards in 2019, a significant bump from 2018 (1,985 yards) and the most in a single season since 2003 (3,746) when the Rod Rutherford to Larry Fitzgerald connection accounted for 92 receptions for 1,672 yards. The Panthers that year also featured a future NFL tight end in Kris Wilson and a capable No. 2 receiver in Princell Brockenbrough.

Of course, part of Pitt's proliferation in the passing statistics in 2019 was because of sheer volume.

The Panthers' offense, under the direction of first-year offensive coordinator and quarterbacks coach Mark Whipple, attempted a whopping 513 passes. That's 197 more than the previous season and the most in program history.

Maurice Ffrench was a favorite target of quarterback Kenny Pickett. Ffrench finished with a single-season Pitt record 96 receptions for 850 yards and four touchdowns. Take away a 96-yard touchdown against Eastern Michigan in the Quick Lane Bowl, and Ffrench averaged 7.9 yards per reception.

I had high hopes for the Mark Whipple-Kenny Pickett combo last year, but the whole <<<<< the sum of the parts. Run game stunk, Maurice Ffrench & Taysir Mack avg'd 6.5 yds/tgt, and Pitt fell to 109th in off SP+. pic.twitter.com/C6qnms7IKT

So Pickett's safety valve is gone, but returning are an experienced player who makes catches in traffic, an emerging big-play threat who became more prominent in the offense as last season progressed, a tall Canadian target capable of making plays over the middle, a sixth-year senior whose career has been riddled with injuries but is praised for his leadership and a pair of freshmen who could climb way up the depth chart.

The rising senior had 63 catches for 736 yards and three touchdowns last season -- a big jump from his 25 catches for 557 yards and one touchdown in 2018. Expect another bump in numbers as Mack slides into the No. 1 receiver role.

At 6-foot-2, 205 pounds, Mack can create mismatches with his size. He's also deceptively fast, a strong route-runner and a solid blocker. The combination makes him an intriguing prospect at the next level.

And when it comes to making contested catches, Mack delivers.

Just look at his three touchdown receptions from 2019.

Let's start with the game-winner in the Quick Lane Bowl.

Great route and insane one-handed catch by Taysir Mack to give Pitt the lead in the Quick Lane Bowl with 46 seconds left. pic.twitter.com/saE5Yqv8tR

How about this one against Duke?

Maybe because it happened in a game most Pitt fans would like to forget, but Mack's touchdown against Delaware gets overlooked.

Nick Patti delivers a strike to Taysir Mack to push @Pitt_FB back in front. pic.twitter.com/YPd0twT9v6

When it comes to making contested catches, Mack might bePitt's best since Fitzgerald. Now, if he can just hold onto the football more often.

A prime candidate for a breakout season, Jacques-Louis overcame an early injury to become a valued member of the offense.

His 23 catches for 348 yards and two touchdowns in 2019 aren't remarkable by any means, but he became a chain mover for a position group in desperate need of a big-play threat.

At 6-0, 185, Jacques-Louis is built more for the outside than the slot, but his speed and ability to run after the catch makes him an intriguing option wherever he lines up.

"He's got a lot of confidence."

The 6-3 Wayne played in eight games as a freshman and started Pitt's final four contests. Like Jacques-Louis, Wayne emerged as a reliable target late in the season.

He was the lone offensive bright spot in a regular-season ending loss to Boston College, hauling in six catches for 100 yards. That marked the first time since Tyler Boyd in 2013 that a Pitt freshman receiver had a 100-yard game. His lone touchdown of the season came in the bowl game on a play where Wayne got open over the middle and bounced off a couple of tackles.

Wayne might have the most upside of the group.

As a freshman in 2015, Tipton played in four games before sprained knee ligaments sidelined him for the rest of the season. He received a medical redshirt. In 2016, he played in nine games before a collapsed lung ended his season. Tipton did not get on the field in 2017, the result of a preseason ACL tear. In 2018, Tipton played a full season, making five receptions for 42 yards.

He had a bigger role in 2019 with seven receptions for 81 yards through three games before another ACL tear ended his season.

The perseverant Tipton, who was honored on the 2019 Allstate AFCA Good Works team and received the Freddie Solomon Community Spirit Award for his community service, is back for a sixth season.

Jordan Addison (6-0, 170) might be the prize of the 2020 recruiting class. The four-star receiver from Frederick, Md., enrolled early and was a participant in the team's abbreviated spring drills. Addison could play immediately in the slot and figure into the kick and punt return teams.

How's this for preseason hype? ESPN college football reporter David Hale lists Addison as his ACC freshman of the year.

Aydin Henningham (6-2, 195) is a three-star prospect from Delray Beach, Fla., who, like Addison, was an early enrollee and drew praise from head coach Pat Narduzzi during the three days of spring drills. Henningham averaged 21.1 yards per punt return as a senior