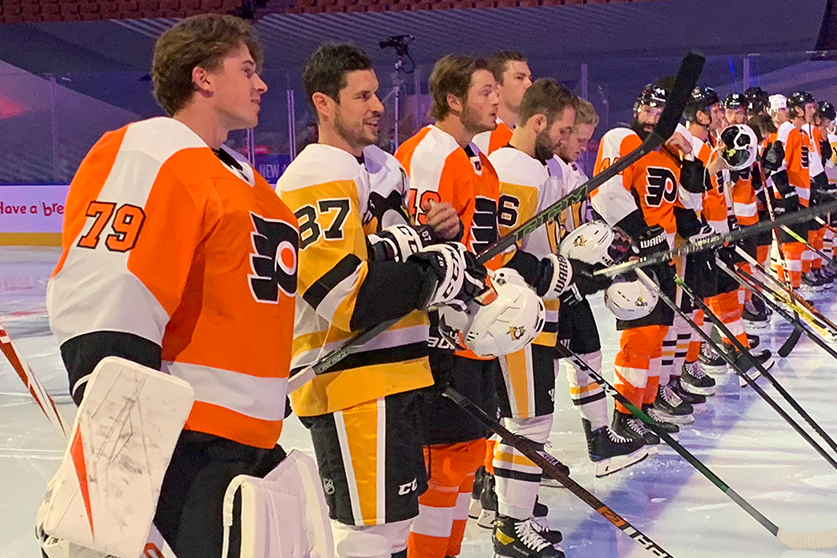 Through the NHL's three days of exhibition games this week, teams made statements and stood side-by-side with opposing teams in what was meant to be a symbol of solidarity.

As far as what they were in solidarity with, the league's messaging has been confusing. The gestures were meant to be against racism and other injustices, while also being in support of frontline workers for their efforts during the coronavirus pandemic.

Of course, standing side-by-side with a bunch of Flyers doesn't actually do anything for the goals of achieving social equality, or supporting frontline workers, for that matter. It's performative. And for the people involved with the sport -- fans, players, anyone -- who are part of the problem, the performative gestures don't do anything to make those people uncomfortable. If anything, it makes a sport a safe space for those people, given the real actions taken by teams in the NBA, NFL, MLB, and WNBA.

As a result of the league's confusing messaging, when players across the league speak about what those gestures mean, the answers have been pretty vague.

“It was something for equality and justice, (anti) racism,” the Flyers' Sean Couturier said after the game with the Penguins. “It was to respect people, your opponent. We’re a pretty big rival, but at least it shows the way that we have respect for each other, the same as in life.”

“A lot has happened since we played our last game. And we felt, both teams, that it was important to show unity given what’s gone on and just wanted to be part of the solution moving forward,” Sidney Crosby said.

Players in the Hockey Diversity Alliance, formed this summer to "eradicate racism and intolerance in hockey,” have spoken out in recent days about the lack of real answers from the league itself in what it can do to continue the anti-racism work and make the game more welcome for diversity, growing the sport.

“Solidarity? Solidarity for what?” the Sharks' Evander Kane said to TSN about the moves made by the NHL. “No one wants to admit there is an issue in our game.”

Avalanche forward Nazem Kadri, another member of the Hockey Diversity Alliance, told reporters in a virtual media availability this week that it's on the league to take more steps to address the lack of diversity in the sport.

“We’re all trying to make it better," he said. "We’re trying to make the game more diverse and the diversity in the game doesn’t happen with racism still going on. So that’s an important thing for us to address. As players we have addressed that. From a league standpoint, you know, I think we’d like to see a little bit more acknowledgement and having them address the situation and know that they stand with their players.”​

In Friday's virtual media availability, I asked Crosby if there's any specific steps that players can do to continue that work.

"I think obviously, we're role models first and foremost," he told me. "I think we understand that. We understand what's going on in the world, and we're important when it comes to being part of the change.

"I just think there's important conversations that you have to have. I know, personally, I've had some of those. But I still need to continue to do that. Just educating ourselves, whether it's where we play or in our own communities, how we can make a difference."

Share
Tweet
Email
DK on WPXI-TV’s ’11 On The Ice’ with Jenna Harner
DK’s Daily Shot: Too many running backs?