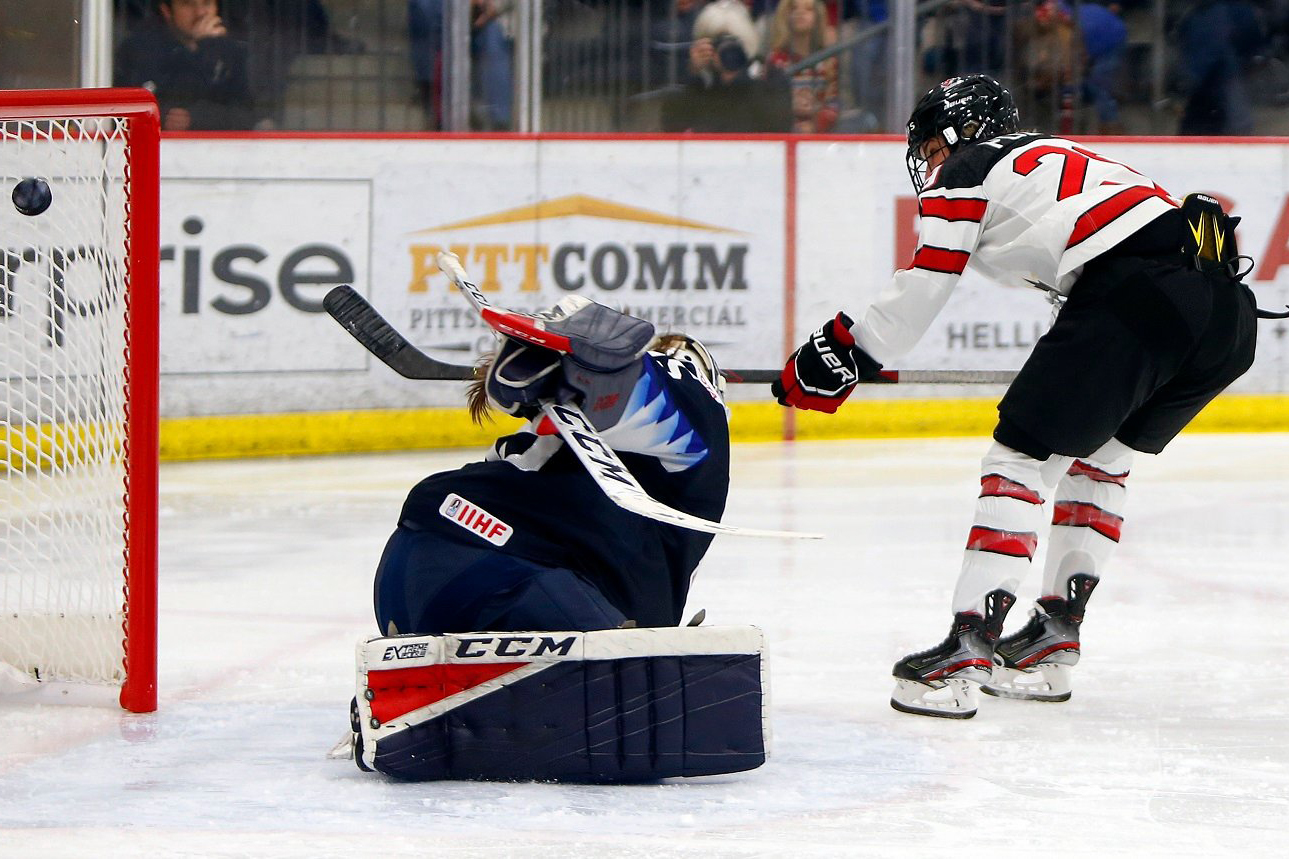 CRANBERRY, Pa. -- There was a theme in the U.S. players' assessment of their 4-1, loss to Canada in the opening game of the joint training camp at the Lemieux Complex in front of a loud, sellout crowd of at least 1,000.

"Tonight the team came out flat," goaltender Maddie Rooney said. "We didn't get going until the second, if at all. Luckily we have a chance to redeem ourselves on Sunday. ... We grinded all week, but tonight we just came out a little flat."

"I think we came out flat," Hilary Knight said. "It definitely wasn't our style of hockey that we're used to putting on the ice and the fans are seeing. But we're going to change that and turn the ship around pretty quickly."

The U.S. women struggled to get many shot attempts in the first period, and didn't get much offensive zone time at all in the first 20 minutes against a Canadian team that was strong when it came to shutting down the Americans in the neutral zone.

Canada forward Victoria Bach, 23, who made her senior debut with Team Canada in last fall's Four Nations Cup, gave Canada an early lead 6:04 into the game when she beat Rooney with a backhand shot:

"I saw (Marie-Philip Poulin) breaking for the puck, and once she got that puck I was just breaking to the net hoping the pass would come through," Bach said of her goal. "When the puck's on Marie-Philip's stick, you just know to go to the net. She ended up making a beautiful pass to me and I shot it in."

"The puck was in the air, the goalie was down," Knight said of her goal. "I tried to find the back of the net."

Canada forward Kristin O'Neill was called for holding at 3:31 of the middle frame, and Poulin scored a shorthanded breakaway goal 40 seconds into the kill to regain Canada's two-goal lead:

"I read the play well, she just lifted it," Rooney said of the goal. "It was a good goal by her so I have to hand that to her."

Just over two minutes later, Bach scored her second goal of the game for Canada:

"We just did everything right today," Bach said of Canada's performance. "We were battling and getting loose pucks, creating turnovers and creating offensive plays for us. It was a really good game and we just have to keep going for Sunday."

Both teams eventually finished with an even shot count at 23 apiece after the Americans tightened up defensively in the final two periods, but they were unable to rebound from their slow, "flat" start.

The Americans will look to take that momentum they started to build in the second and third periods and carry it into Sunday for the second and final meeting between the two teams in Cranberry.

"We had our chances here in the third, so we're definitely going to use that momentum going into Sunday," Rooney said.

"You can feel the clock running down and time slipping away," Knight said, "I think it just comes down to a great start. If we execute the game style that we're supposed to be playing, I think we're going to be in a good position. It's just making sure we pay attention to those details and prepare ourselves for Sunday."

When asked how to describe Team USA's style when they're at their best, Knight summed it up in just a few words.

"Fast and strong," she said. "We're the fastest team in the world. We just need to keep going."

• The sold out crowd stuck around for the full game and was loud all night, despite the Americans trailing for most of the game.

"It was great," Rooney said of the atmosphere. "A sold out crowd? That was awesome. They were loud when we had our chances and saves so that was really fun."

• Anyone who thinks women's hockey isn't physical because of the lack of outright bodychecking needs to rewatch the film of this game. It was incredibly physical.

• Former Steelers kicker Shaun Suisham was in attendance with his daughter, presumably rooting for the Canadians.

And for Troy Ryan's Canadians:

Visit our women's hockey page for everything.

Share
Tweet
Email
Scott Wilson, other athletes sue city of Pittsburgh
Galchenyuk to top line, with aim to get going