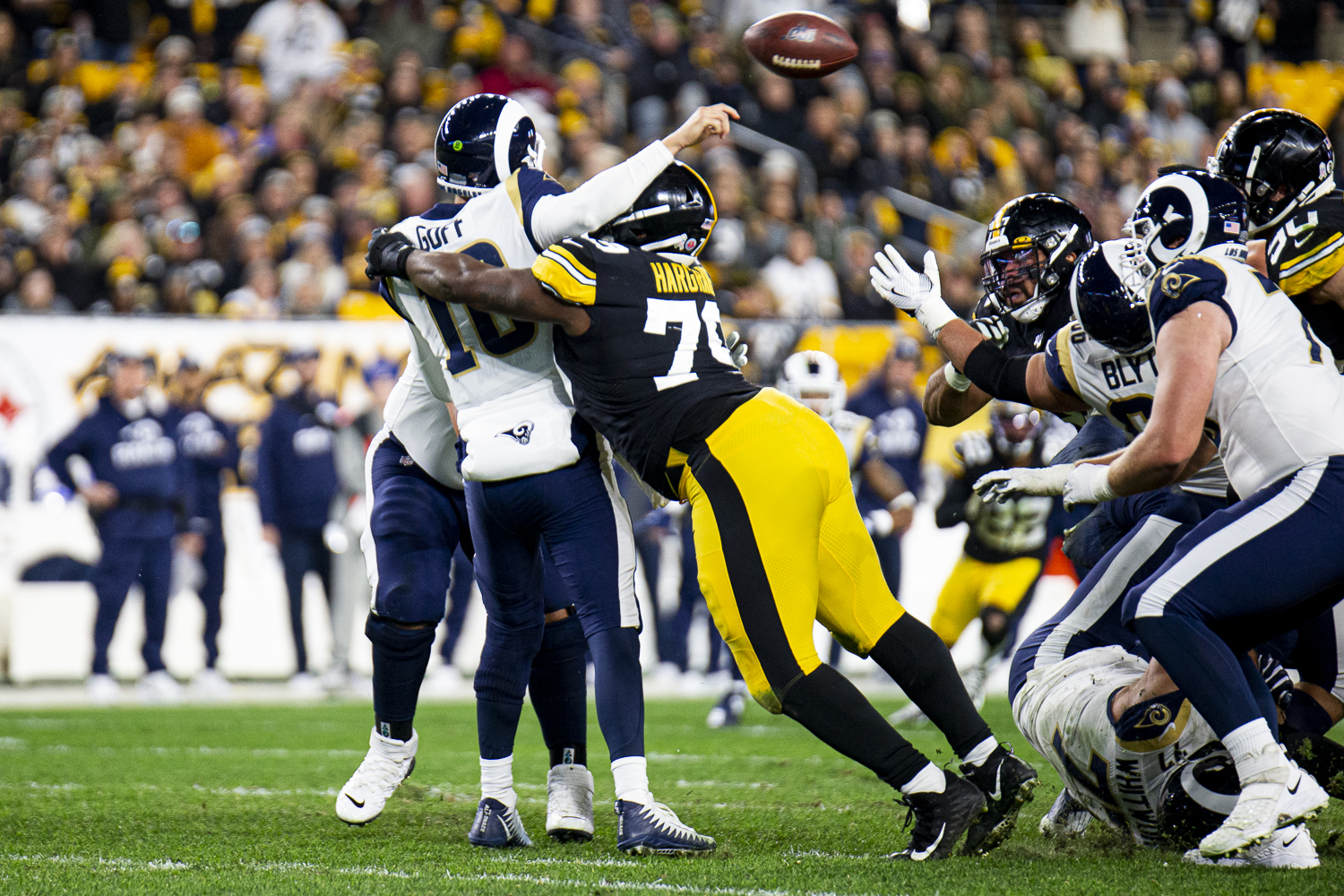 Forget the Steel Curtain defense, members of which were honored at halftime of Sunday's game against the Rams as part of the 40th anniversary of Super Bowl XIV.

Forget the Bltizburgh defense, which terrorized offenses in the mid-'90s.

The Steelers forced four more turnovers Sunday, with Minkah Fitzpatrick contributing two of those, including a fumble he returned for a touchdown, and the defense stopped the Rams on two drives in the closing minutes in a 17-12 victory over the defending NFC champions at Heinz Field.

The win, the Steelers' fourth in a row and fifth in their past six games, improved their record to 5-4 while dropping the Rams to 5-4. It also moved the Steelers into the sixth position in the AFC standings, meaning that if the playoffs started this week, they would be in, quite a turnaround for a team that began the season 0-3.

And once again, it was the defense that did the damage, with Fitzpatrick, acquired in a trade with the Dolphins after Week 2 along with two late-round draft picks for three Steelers draft picks, including their first selection in 2020, providing the most explosive plays.

"He’s doing great. Kevin Colbert probably should have gave away four picks for him," Bud Dupree said. "It’s fun. Minkah came in and contributed right away. He’s a smart guy. He’s one of the catalysts for our defense."

He certainly was in this game.

With the game tied at 7-7 in the first half just after the two-minute warning, Javon Hargrave stormed through the Rams' line and hit Jared Goff as he wound up to throw. The ball squirted out of Goff's hand, bounced once and landed in the waiting arms of Fitzpatrick at the Los Angeles 43:

He took off down the sideline untouched for a touchdown that gave the Steelers a 14-7 halftime lead.

"I was on the ground and I looked up and he was already running down the sideline," Hargrave said. "(I knew) there was a chance (it was a fumble). I felt the ball. I had one earlier in the year and they called it a forward pass, so I was just hoping it was a fumble."

After a short review, it was ruled Goff had fumbled, much to the chagrin of the Rams.

"When you see it in live action, that was the hope," Rams head coach Sean McVay said of his team feeling it was a forward pass. "That is what it seemed like, but we don't question any of their calls. They get a chance to look at it, slow it down, and I didn't really see it close enough to be able to say."

The Rams tacked on a field goal in the third quarter and then a safety -- the second allowed by the Steelers in as many weeks -- in the fourth quarter to trim the lead to 14-12, when the Steelers mounted 14-play, 60-yard field goal drive that was essentially the only thing the offense did in the second half.

That drive, which saw the Steelers convert a fourth-and-1 from their own 34, and two third downs after that, took eight minutes off the clock before it ended with a 33-yard Chris Boswell field goal that extended the lead to 17-12 with 2:39 remaining in the game.

That eight-minute drive gave the defense just what it needed -- a chance to rest. And it would be needed, as the Rams got the ball back twice in the closing minutes down less than a touchdown.

The Rams drove to the Pittsburgh 30 after a pass from Goff to Josh Reynolds just after the two-minute warning. But Goff then threw incomplete on four consecutive passes, the last of which was broken up by safety Terrell Edmunds in the end zone.

That averted one crisis. But with 1:25 remaining and the Rams holding all three of their timeouts, the defense knew their day was likely not over.

"Sometimes, in the beginning of the season, the offense would get off the field quick and we’d be back out," Cam Heyward said. "But our mentality has been completely different. We’re relishing those moments when we get back out there and trying to get points."

The Steelers ran the ball three times -- they had just 42 yards on the ground -- and forced the Rams to use all three of their timeouts. But they didn't come close to getting a first down and punted the ball back to the Rams with 1:01 remaining.

The defense, which was approaching 70 snaps played and hadn't substituted much up front like it had in previous games, went back out again to close it out.

"Absolutely adrenaline and having fun," T.J. Watt said of what was keeping them going. "We were just thriving in those moments. We’re battle tested. We’ve been through so many tough situations and we just love having the game on our shoulders. We take ownership and try to make plays. We love us every time."

And they love Fitzpatrick.

Watt got home on Goff on the first play from scrimmage, sacking him -- the Steelers' fourth of the game -- and forcing a fumble. The Rams recovered the loose ball, but the clock continued to run. Los Angeles picked up a first down, but with 30 seconds remaining, Joe Haden, who had earlier picked off a pass himself in the second half, broke on a pass intended for Robert Woods and batted it up in the air and into the waiting arms of -- you guessed it -- Fitzpatrick.

"He had two or three today," Fitzpatrick said of Haden's breakups. "When you see the ball, you’ve got to go where the ball is. Joe was in the right position and made a nice a play, and we finished that."

Thing is, Fitzpatrick not only goes to where the ball is, the ball seems to be drawn to him. He now has five interceptions, two forced fumbles and one fumble recovery, and has an interception in three consecutive games, becoming the first Steelers defender to do so since Troy Polamalu in 2008.

"That’s a testament to him and his preparation, and his attention to detail when he’s on the field," said linebacker Mark Barron, a former safety himself. "When you’re always around the ball like that, it’s always looking at the right thing consistently. He’s in the right place. It’s playing with effort, and on top of that, being a smart player. I love watching him. I’m a former safety, so I can appreciate what he’s doing right now."

All of the Steelers can appreciate it, because it's helped them get to 26 turnovers for the season, moving them within one of the idle Patriots for the league lead at 27. They had 15 all of last season.

"He’s a ballhawk. He just finds the ball," Dupree said. "I don’t know if he’s reading routes or what, but it’s crazy to see him back there making all these plays on the ball. Every game, Minkah’s making big plays on the back end."

It didn't hurt that the Rams had to shuffle things up front with their offensive line when center Brian Allen went out in the first half. Right guard Austin Blythe shifted over to center, while Austin Corbett, acquired a few weeks ago in a trade with the Browns, played right guard.

The Steelers smelled blood in the water on defense and won the possession downs, holding the Rams to just one third down conversion on 14 attempts. They did that by bracketing Goff's favorite target, Cooper Kupp, all over the field, but especially on third downs. Kupp entered the game with a league-best 21 third-down catches, but did not catch a pass on four targets in this game.

"We knew Kupp was Goff’s guy," said Mike Hilton. "The plan was to take him away and make the other guys beat us. Four targets? No catches? I was on him the whole game. I had help, but we ended up taking him out of the game."

It was a defensive effort for the ages against a Rams team that entered the game eighth in the league in scoring, averaging 26.8 points per game.

The Rams didn't sniff the end zone, failing to score an offensive touchdown, with their only touchdown coming on this miscue on their third defensive snap.

At that point, it looked like it would be a long day for the Steelers. Instead, they turned the tables with their own defense.

"We like our defense," Haden said. "As long as we don’t have any busts, nobody should really get anything on us. They have a really good offense, but we were on top of it today."