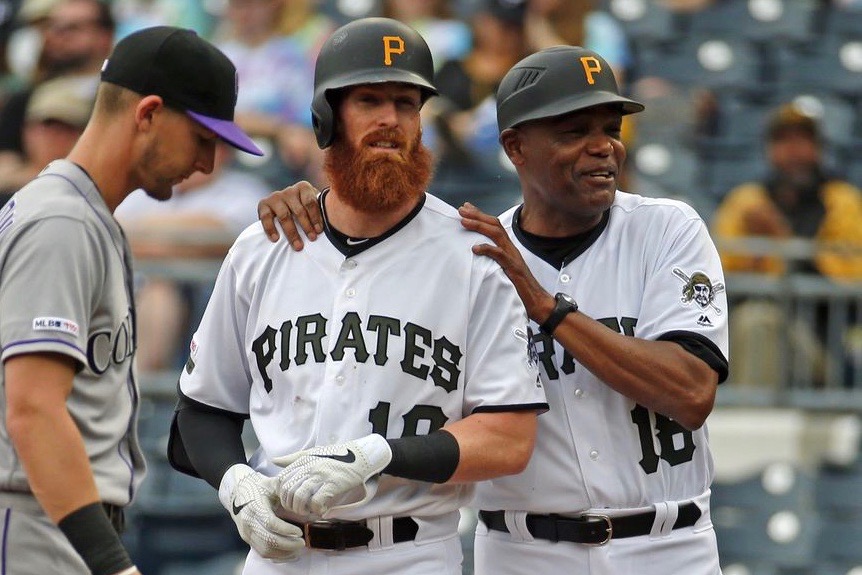 The last man to catch the last out of a World Series in a Pittsburgh uniform is out himself.

Omar Moreno was informed today by the Pirates that he won't be brought back as a minor-league instructor, a source told DKPittsburghSports.com Tuesday evening. Moreno was called with the news earlier in the afternoon by Larry Broadway, the minor-league director under already-fired Neal Huntington.

Moreno, 67, was a special assignment coach, working with prospects at Class AAA Indianapolis, Class AA Altoona, Class A West Virginia, the Dominican Republic and, occasionally, with the major-league club at Clint Hurdle's invitation. He filled in as first base coach at PNC Park for a series this past summer.

Moreno very much had hoped to continue working. Just a week ago, he and Josh Bell were meeting with fans at PNC Park:

Just spent a great couple of hours with some of our @Pirates fans and one of my hard working kids, All-Star @JBell_19 #FamaleeForever #WeAreFamily pic.twitter.com/0vJoLqPzDP

A fleet-footed center fielder known as 'The Antelope' in his playing days, Moreno was a fixture in Major League Baseball from 1975-86, notably for his role in the Pirates' last championship, the famed 'Fam-a-lee' comeback in 1979 over the Orioles. He caught the final out of Game 7 at Baltimore's Memorial Stadium.

As instructor, he emphasized baserunning and defense, his own strengths as a player, and often spoke to prospects and major-leaguers alike with pride of being part of the Pirates' championship.

So, why is Broadway making personnel decisions?

That's the key question here and, for the moment, it's anyone's guess, assuming this was, in fact, his call. Broadway, like the overwhelming bulk of Huntington's previous staff, are expected to be replaced once a new GM is found. That includes Kyle Stark, Broadway's immediate superior and assistant GM under Huntington, who still hasn't been shown the door.

UPDATE 8:25 p.m.: I've learned that, this past summer, Moreno expressed his concerns to Huntington and Stark via an email to both men that prospects in the Pirates' system weren't being given a consistent message, that they were hearing too many voices. He also expressed a concern that he wasn't permitted to spend one-on-one time with the prospects he'd been hired to instruct.

The latter's been universally expressed over the years, by the way, by countless baseball people under Huntington. Their voices weren't heard, by prospects or anyone over their heads. And when they did speak up, they'd be demoted or fired.

Huntington then responded via email that he agreed with Moreno about too many voices but that the solution would basically be that roving or guest instructors -- such as Moreno -- should have their ranks reduced.

Eventually, that came to pass, nearly a month after Huntington himself was fired but clearly not before the housecleaning was complete.

UPDATE 9:14 p.m.: From everything I hear tonight, this will be rectified. Neither Bob Nutting nor Travis Williams was aware of this move until this report, and that's as I'd assumed. I'll keep you updated.

UPDATE 1:17 a.m. Wednesday: This will be resolved. Later today.