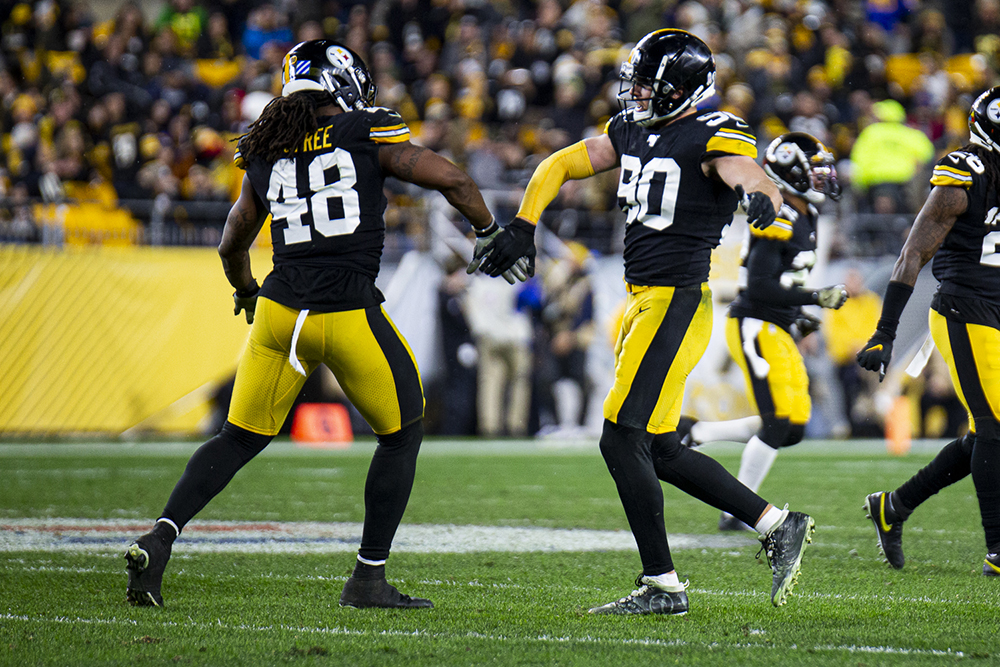 A funny thing happened on the way to the Browns' coronation as the next great NFL team.

It wasn't that the emperor had no clothes. A bigger issue has been that Baker Mayfield has had no protection.

And that's before the Browns have played either of their two games against the Steelers this season.

The first of those two meetings -- both will come in the next three games -- will come Thursday night in Cleveland when the Browns (3-6) host the Steelers (5-4). And Mayfield and company can't be looking forward to the Steelers' pass rush coming to town.

The Steelers are not only second in the league with 33 sacks this season, they lead the NFL with 71 quarterback hits, an average of nearly eight per game.

Those quarterback hits are every bit as painful and can be just as impactful as sacks.

"Yeah. Sometimes, that’s how we’ve been getting turnovers, putting pressure on the quarterback where he’s got to get it out before he’s comfortable," said Cameron Heyward, who has 5.5 sacks and 11 quarterback hits. "We talk about hits, just rattling a quarterback and making him see ghosts. That’s what we’ve got to do from here on out."

T.J. Watt has had the biggest impact in that area. He leads the Steelers with 9.5 sacks, but his 22 quarterback hits lead the league. Fellow outside linebacker Bud Dupree has 6 sacks and 9 quarterback hits.

That pressure has helped the Steelers create 26 turnovers -- 14 on interceptions -- just one behind the Patriots for the league lead. The Steelers often talk about pass rush and coverage going hand in hand.

"I think the strength of our defense is up front, although on the back end we’re not bad, either," Keith Butler said.

No, it's not been. But that defensive front has definitely affected games.

"Coach always says rush and coverage go together, and this is for sure the best defensive line I’ve ever played with as far as getting after the quarterback," Joe Haden said. "We’re not doing a lot of covering. We’re doing a lot of man, but they get after the quarterback. If his first option is done, he’s probably going down. We just try to get a body on a body as far as matching up. We don’t leave anybody running free. With a person on a person, we like our matchups."

A lot was made about the Browns acquiring Odell Beckham Jr. in the offseason to pair with Jarvis Landry, giving Cleveland a pair of 1,000-yard, Pro Bowl receivers. But because of a porous offensive line, Mayfield hasn't always had the time to get the ball to those guys.

And the additional pressure has gotten to him. He's thrown 12 interceptions and fumbled three times, losing one. He had 14 interceptions last season. He also leads the NFL with 10 passes batted down, another way the pass rush can affect the game.

The Steelers have done a good job with that, as well, batting down 11 passes at the line of scrimmage, led by Heyward's four.

"If we can get some up in the air and catch a couple, it would be good," Butler said. "We’ve been able to do that. Our guys have gotten their hands up — if it’s a three-step drop and the ball is getting out fast, they get their hands up and do a good job of that."

But they all have an effect on the game. And the quarterback.

"Our job is to always affect the quarterback any way we can, whether it’s knocking the ball down or just not letting him get in rhythm," said Tyson Alualu, who batted a pass in the air against the Chargers in Week 6 that was intercepted by Devin Bush. "I think those all play a factor in how well we play as a defense. There’s always that selfishness in each competitor, wanting to get the sack, those numbers always count more. But any way you can affect the quarterback helps."