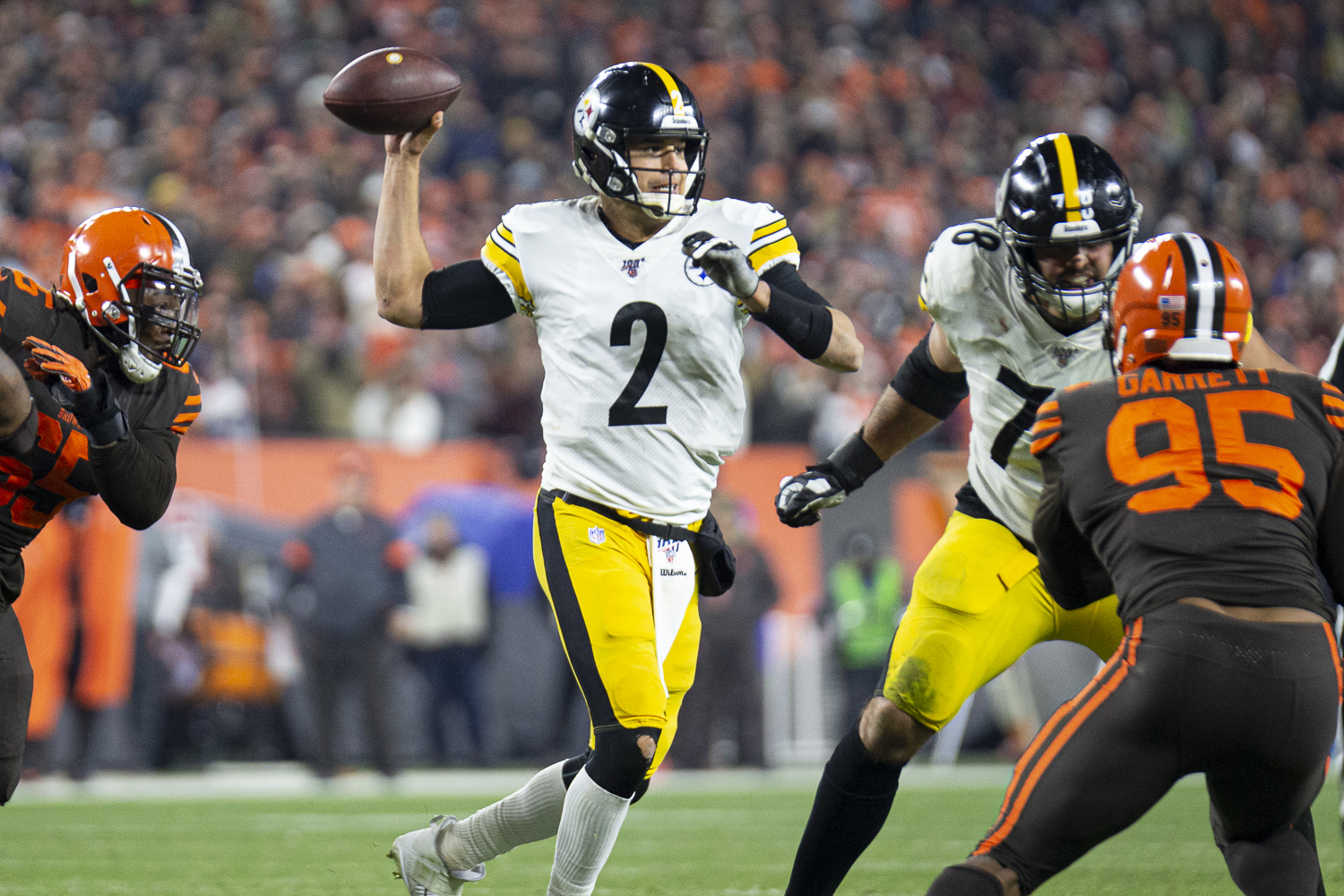 Myles Garrett won't play another snap this season — even if the Browns miraculously make the playoffs.

Per Adam Schefter, the Browns star defensive end is suspended "indefinitely" with a minimum of this regular season plus postseason after removing Mason Rudolph's helmet and hitting him in the head with it late in the Browns 21-7 win over the Steelers Thursday night in Cleveland.

Per an NFL release, Garrett "violated unnecessary roughness and unsportsmanlike conduct rules, as well as fighting, removing the helmet of an opponent and using the helmet as a weapon."

Garrett is expected to appeal this suspension:

Myles Garrett is expected to appeal the suspension, per source. Mason Rudolph did not anticipate a suspension but is bracing for a potential fine.

"Last night, I made a terrible mistake," Garrett said in a release. "I lost my cool and what I did was selfish and unacceptable. I know that we are all responsible for our actions and I can only prove my true character through my actions moving forward. I want to apologize to Mason Rudolph, my teammates, our entire organization, our fans and to the NFL. I know I have to be accountable for what happened, learn from my mistake and I fully intend to do so."

Maurkice Pouncey, who punched Garrett repeatedly and kicked him on the ground after Rudolph was hit in the head with his helmet, will receive a three-game suspension without pay for his part in the fracas. Per Ian Rapoport, Pouncey also plans to appeal:

#Steelers OL Maurkice Pouncey, suspended 3 games by the NFL and fined, is expected to appeal, source said. This suspension, if it stands, would keep him from playing the #Browns again.

Both Garrett and Pouncey were "fined an additional amount" as well.

A final player, Larry Ogunjobi, has been suspended without pay for one game and fined an additional amount for "unnecessary roughness, specifically for shoving an opposing player to the ground during an altercation." Ogunjobi pushed a still-helmetless Rudolph to the ground from behind as the madness unfolded on the field.

Additionally, the Steelers and Browns organizations received matching $250,000 fines, while Rudolph is expected to receive a fine as well.

Per the release, "Additional discipline for other players will be forthcoming through the standard accountability process, including those players that left the bench to enter the fight area."

The suspensions, per the Collective Bargaining Agreement, can be appealed within three business days — and there may be more to come:

In the end, unprecedented penalties levied by the NFL: 10 total games of suspensions for 3 players at least. $500,000 total against two teams. Plus every player who left the bench area to participate will be fined. There could be more.

Browns owners Dee and Jimmy Haslam offered the following statement on the incident:

"We are extremely disappointed in what transpired last evening at the end of our game. There is no place for that in football and that is not reflective of the core values we strive for as an organization. We sincerely apologize to Mason Rudolph and the Pittsburgh Steelers. Myles Garrett has been a good teammate and member of our organization and community for the last three years but his actions last night were completely unacceptable. We understand the consequences from the league for his actions."

Booting Garrett for the rest of the year was obvious. That's the right call. One game for Ogunjobi is also correct.

Pouncey missing three games, however, is infinitely more debatable. But I actually agree with that one, too.

There is no question Pouncey was sticking up for Rudolph and protecting a teammate in what he deemed to be quite literally a life-or-death situation. His instincts took over, a point he emphasized after the game.

"Man, he could’ve killed him. What if he’d hit him in the temple? Let’s be serious," Pouncey was saying after the game, adding that he never felt like that on the football field and that he "blacked out."

And, hey, good for him, man. Truly. Garrett's actions were deplorable and potentially criminal. Pouncey was protecting his own. But throwing a series of punches and a kick to a grounded opponent isn't a good look for the NFL, no matter the context. They had to do something, and three games feels right in this situation.