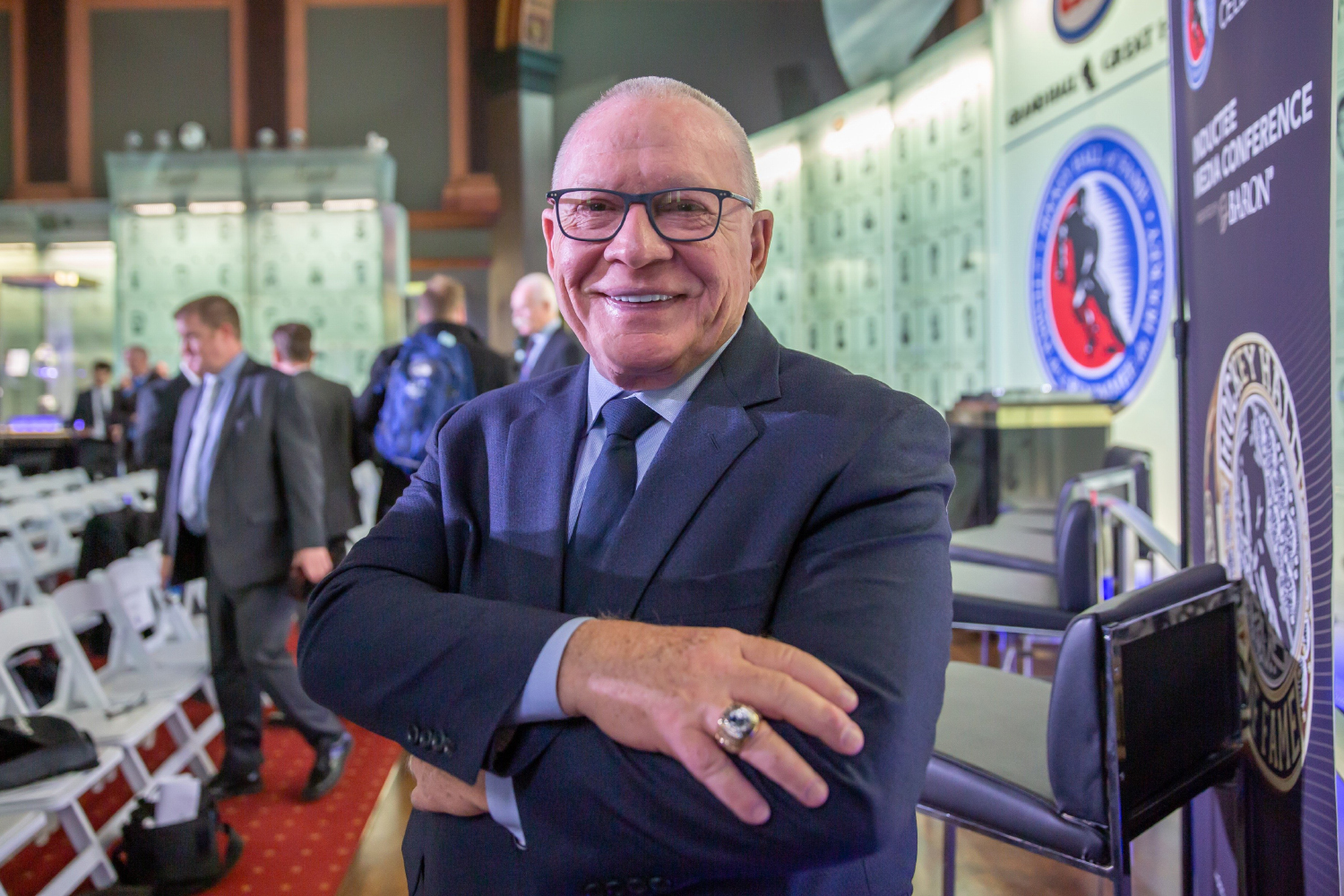 Jim Rutherford will not be in attendance for the Penguins game against the Maple Leafs on Saturday at 7:08 p.m. at PPG Paints Arena.

He has a good reason, though. He's in Toronto for the four-day Hockey Hall of Fame Induction celebration festivities.

Rutherford spoke to reporters in Toronto at the inductee media conference prior to Friday's Hall of Fame Game between the Bruins and Maple Leafs.

Rutherford was asked if it has sunk in yet that he's a Hall of Famer.

"Well, I'm not sure," he said. "It's sunk in, but I think there's more to come that I'll really be able to think about as time goes along. I don't know, it's just really hard to put into words how I feel right now. I obviously feel really good and excited. I feel really nervous about the speech on Monday night because I don't want to miss anybody and I've had a lot of people that have really helped me."

Rutherford said the framework of his speech was done about two days after he found out he was being inducted. When Hall of Fame director of corporate and media relations Kelly Masse visited Rutherford at his home to talk about the speech, she told him, "Wow, this is a first. We've never had anybody have it done this early."

For Rutherford, 70, the honor has caused him to reflect more on his 14-year playing career and his career as an executive, that has now spanned over three decades.

"You know, for the most part I'm a guy that lives today and not yesterday, what's going to happen tomorrow," said Rutherford. "So I haven't really reflected a lot on my playing career. Since this was announced I'm going to be inducted, I've taken more time to think about that. It's really been an exciting part of my life."

The highlights of Rutherford's career as an executive have been his three Stanley Cups -- one with Carolina in 2006, and two in Pittsburgh in 2016 and 2017. Rutherford was asked about the secret to that success.

"Well, the last two is not that big of a secret. Sidney Crosby, that's not a big secret," he said. "You know, I've been really fortunate. I've had good people to work with. The one in Carolina was pretty special because we came out of the work stoppage that year, we were kind of picked as a team that wasn't going to do that well. It all came together. That was fun because I was the guy that made the decision on every one of those players. Pittsburgh was special, back-to-back, but that wasn't all my team. Craig Patrick and Ray Shero played a role in that team, bringing players in before I got there. Obviously there had to be some adjustments, so I was proud of the fact that we made the right adjustments. You certainly have to have a lot of character on your team. My philosophy is being good down the middle, and the goalie makes up for a lot."

Rutherford spoke on what the biggest key has been for the growth he's made throughout his career.

"I think the biggest thing is you always have to be positive," he said. "Take the positive out of everything. And you have to be determined. If you do that, good things will eventually happen."

Rutherford said his favorite section of the Hall of Fame is the display of all of the different goaltending masks, because his playing career took place in early years of goaltenders putting art on their masks.

"Lots of people come up to me and say, 'God, I remember when you played, I remember your mask.' And I walk away and think, 'Did they ever remember I won a game or stopped any pucks?' They only remember me by my mask," he laughed.

Rutherford joked that the old style masks never really protected much. The first time he wore one, he was 16 or 17 years old. About a minute into the practice session, a slap shot hit him in the mask over the mouth and knocked out four teeth and caused him to need 40-something stitches.

Looking around at the plaques for all other Hall of Fame players and executives, Rutherford was a little struck by some of the names, knowing that he's now one of their peers. A reporter commented that 15 years from now, some other inductee is going to be sitting in his spot, struck by seeing Rutherford's plaque.

"Well they're not, because they tucked (the plaque) over here in the corner. But whenever they eventually walk around there," Rutherford laughed. "I think the biggest thing is my son and daughter and grandkids at some point in time can say, 'There's my dad.'"

The Hall of Fame weekend will continue with a fan forum question-and-answer session on Saturday. Mats Sundin and Nicklas Lidstrom will captain two teams of Hall of Fame players and All-Stars in a game on Sunday, during which Rutherford and Hayley Wickenheiser, Jerry York, and Sergei Zubov will receive their Hall of Fame blazers. The induction ceremony will take place on Monday.