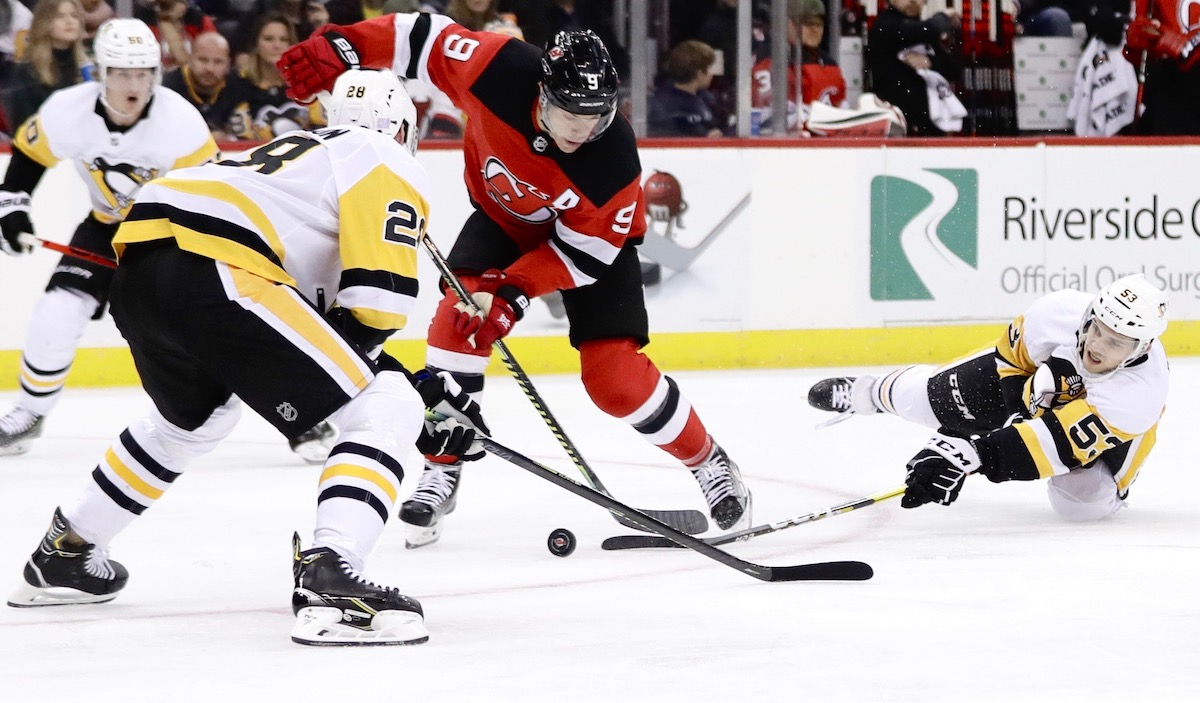 NEWARK, N.J. -- There is much to be said for being a great come-from-behind team, a club whose talent and tenacity allows it to consistently overcome deficits -- multiple-goal ones, even -- to earn points in the standings.

The only thing better, perhaps, is not needing to be a great come-from-behind team.

To actually win some games by getting a lead and never surrendering it.

For the 2019-20 Penguins, that's pretty much a hypothetical issue, because claiming an early advantage and protecting it isn't something they know much about, as witnessed yet again in their 2-1 loss to the Devils Friday night at Prudential Center.

New Jersey got the first goal of the game, the fifth consecutive time the Penguins have allowed one of those ...

Yeah, it was the fifth game in a row that's happened to the Penguins, too. The difference this time is that they weren't able to climb out of that two-goal hole to earn a point or two, as they had in three of the previous four.

Not even when they got a goal from Jack Johnson, who hadn't scored in his previous 91 games:

Never mind that the Devils entered the game anchored to the bottom of the Eastern Conference standings, or that New Jersey had been having at least as much trouble preserving leads as the Penguins have getting one.

On this night, Johnson's shot from the left dot with eight minutes gone in the third period was the only one of the 39 the Penguins threw at Mackenzie Blackwood that eluded him, who looked a lot like Martin Brodeur did on so many nights when the Penguins left town with nothing more than dirty laundry and bruised egos.

"Their goaltender was terrific," Mike Sullivan said. "You have to tip your hat to him. It was one of those nights when it was tough to find the back of the net."

Perhaps, at least in part, because the Penguins didn't spend enough time in front of it, especially during the first two periods. For most of those 40 minutes, Blackwood got a pretty good look at almost every shot, and any NHL goaltender who can see a puck coming at him has a pretty good chance of stopping it.

"That's a thing we talked about in the second intermission," Jake Guentzel said. "We had to get more net-front traffic."

They succeeded and, in the process, threw 11 shots at Blackwood during the third. Trouble is, only Johnson's made it by him.

Of course, Johnson's goal might have been one that gave the Penguins control of the game if they'd made life a little more miserable for Blackwood earlier in the evening.

"If we had a little better start -- maybe had a first period like we had a third period -- we would have been up by two or three goals," Bryan Rust said.

Blackwood got the better of the goaltending duel with Matt Murray, who stopped 19 of 21 shots and assessed his performance as "average, at best."

Both goals Murray allowed were a bit quirky. Travis Zajac, who would be a first-ballot Hall of Famer if he played every game against the Penguins, broke a 10-game point drought at 6:59 of the opening period, as he chipped in a Jesper Bratt feed from the left side of the crease.

Blake Coleman then scored what turned out to be the game-winner with 4.1 seconds left in the middle period, when Murray failed to control the rebound of his initial shot from the left side and Coleman charged to the net to knock the puck past him.

"It was kind of a nothing play," Sullivan said. "That ended up in the back of our net."

Not long before Coleman scored, Nick Bjugstad left the game after appearing to injure his right knee after a run-in with Jesper Boqvist of the Devils.

Sullivan did not offer any details of Bjugstad's injury, saying only that it is "being evaluated." Still, it's possible, if not likely, that the Penguins will recall a forward from Wilkes-Barre/Scranton before their game against Toronto Saturday at 7:08 p.m. at PPG Paints Arena.

The Penguins have played four of their past five games on the road, so perhaps being in familiar surroundings against the Maple Leafs will allow them to do something strange and wonderful, like score the first goal of a game. That's something they've managed only six times in 19 tries this season.

Playing from behind so frequently is no way to accumulate points, especially when the Penguins are being forced to play without the likes of Sidney Crosby, Kris Letang and Patric Hornqvist.

"It's tough," Guentzel said. "We can't be doing that. We have to find a way to get the first one and go from there. Try to get the lead a little more often."

More than once every few weeks, at least. More than two have passed since their most recent one, when they took a 1-0 lead en route to a 7-1 victory against Philadelphia Oct. 29.

Despite the Penguins' penchant for spotting other teams multiple-goal leads, Sullivan regularly professes to be pleased with how they're playing, regardless of the result. And so it was again Friday.

"I thought our guys played hard," he said. "I thought we played smart. We just didn't find the back of the net enough. ... When you play the game the right way -- and we feel we are right now -- results will follow."

Unfortunately for the Penguins, the NHL doesn't award points for moral victories, and that's the only kind they took home from New Jersey.

"We played hard, fought through all the way," Johnson said. "I thought we were the better team for the majority of the game. But the final score is all that matters."