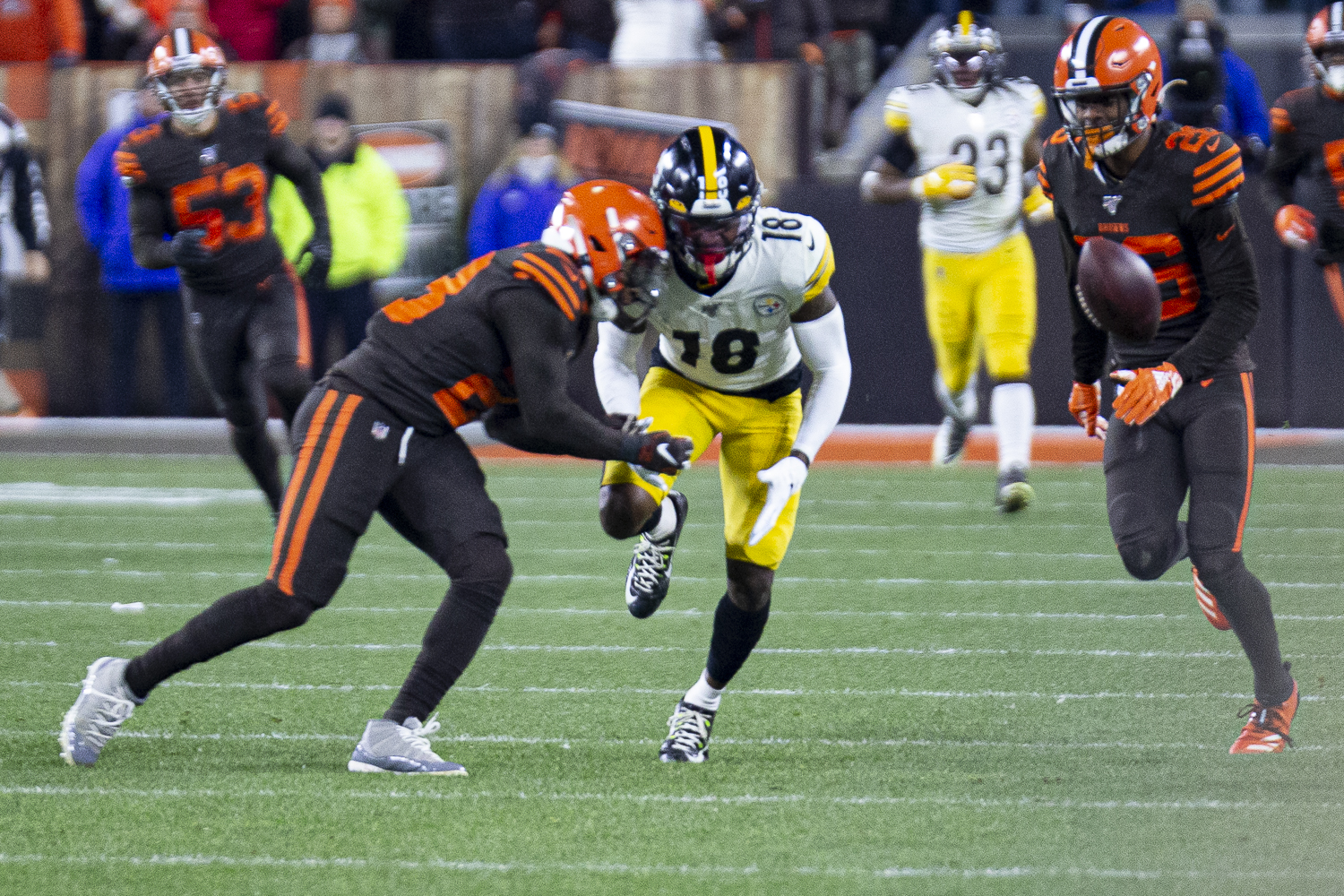 The Steelers could complain, and it'd be tough to blame them.

The injuries are almost comical at this point: Ben Roethlisberger went down for the year in Week 2 with an elbow injury that required surgery. JuJu Smith-Schuster is limited this week and may not play Sunday against the Bengals with both a concussion and a knee injury. Diontae Johnson also has a concussion. James Conner's already missed time with a banged-up shoulder, and it flared up again in the team's Week 11 loss to the Browns. Third-string running back Benny Snell has missed the last three games after having a minor knee procedure as well.

Add it up. This team isn't thin on offense. It's emaciated.

"It affects [the game] a lot," Jaylen Samuels, who himself missed time this year with a knee injury, was saying about the team's laundry list of injuries Monday at the Rooney Complex. "It changes the game plan. It changes the personnel."

"But this is what we get paid to do," he continued. "We gotta come in here, learn what we gotta do, get the game plan and go from there. So if the game plan switches throughout the week, then it switches, but we gotta be ready for whatever."

David DeCastro echoed that sentiment Monday at his locker. Asked why the Steelers' offense has struggled and seen a decline in yards-per-play since their Week 8 win over the Dolphins, DeCastro didn't hesitate. He's straightforward and blunt — and he certainly didn't break character for this response.

"I don't know, just injuries, just kind of wearing us down a little bit," DeCastro said. "That's part of the game. When you're losing guys and stuff, it's a player-driven league. It really is. I don't know. I wish I had a better answer for you. I think the injuries are just, they're tough."

"It's one of those things, you know, football's a game of experience and the more you do it, the easier it gets," DeCastro said. "So you got guys coming off, even if they're talented players — obviously everyone in this league is to get to this point — it's just tough without the reps ... It's part of the NFL. It happens to a lot of teams. It's unfortunate we're in this situation, especially on our side of the ball."

That was the theme throughout the room Monday in the South Side. No players would run from the obvious (I mean, you saw that list of injuries above, right?) but they also refused to use it as a crutch. In the end, this team isn't getting it done on the field. As DeCastro said, this is life in the NFL. People will get hurt.

In the end, though, it's only about this:

Now add into the team's injury problem this twist: Maurkice Pouncey is serving a three-game suspension for his involvement in a late-game brawl against the Browns and, specifically, Myles Garrett. Pouncey has appealed that suspension, and that will be heard Tuesday, but the team's bracing for three games without its Pro Bowl center.

Asked about this loss, DeCastro immediately turned to a positive.

"Luckily [backup B.J. Finney's] got experience," DeCastro said. "Obviously he's not Pouncey. Pouncey is who he is, so [Finney will] fill in for a couple games, which he's done great [at] before, so we expect him to do it again."

"It's a big loss," Samuels added on Pouncey. "He's the leader of our team, captain on our team. He knows everything — great player, great person. So just to have that leadership not on the field, it's going to hurt us, but I'm sure he will be behind us throughout the week of practice and for the game as well. Not having him out there is going to be a huge loss, but we can't let that affect our play."

The final layer in all this is that brawl with the Browns itself. It was the kind of skirmish that could rattle a squad or unite them. So far, it seems clear the Steelers are choosing the latter route.

"We just gotta turn the page and just go on with our week," Terrell Edmunds was saying at his locker. " ... Man, we can't blame a loss on whatever happens outside of playing the actual game. I know it happened during the game, but we lost the game. We gotta come out this week, come out, practice harder because we got another divisional opponent coming up this week. We can't slip up again."

Interestingly, Mike Hilton was involved with a situation earlier this year in Carson, Calif., against the Chargers when opposing quarterback Philip Rivers tied him up during a dead ball and appeared to try to intimidate him. While that situation caught a little bit of attention post-game, it resurfaced with a fury after the Steelers' incident vs. the Browns.

Damn…Hilton should’ve ripped Rivers helmet off and beat him over the head with it. Woulda been justified since Rivers started it…right? 😂 pic.twitter.com/x2v94wEOQM

Hilton could have overreacted or caused a skirmish. Instead, he kept his cool, put his arms up and walked away. So what was going through his head?

"It's just having a quick thought, man," Hilton was telling me Monday at his locker. "Just knowing we had the game in hand. There was no point in me striking back and hurting myself and hurting the team. So I just had a little quick realization, just, 'You got the win. Let's just get out of the building.'"

That said, could Hilton understand where Garrett was coming from? Being in a somewhat similar predicament, could Hilton pinpoint what'd cause him to snap?

"I mean, maybe just out of frustration," Hilton said. "It's two tough teams competing, trying to win the game. Things got out of hand of course, but he reacted the way he reacted, and I'm pretty sure he feels some way about it. Just ... especially going next week against these guys again, we can't let that faze us. We gotta keep our composure."

DeCastro himself took the Hilton route in this latest fracas with Garrett. He immediately engaged Garrett, held him back and wrestled him to the ground rather than striking him or escalating the situation. I asked him how he was able to keep relatively calm, given the circumstance:

"Well, I've been on both sides," DeCastro said. "I've been on the side where you lose your cool and you kind of just see red, so you can't understand the emotions and you just see red and you wanna go crazy. So I've been there, I can understand. At least someone's gotta have a level head, try to de-escalate it before someone gets really hurt."

While the NFL said additional fines and repercussions would be coming for players involved, DeCastro said he hasn't heard anything on that front.

"No, I haven't heard anything," he said. "I'll leave it up to them and cross that bridge if I need to."

So there are injuries for this Steelers squad. There's a crucial suspension. And now, there's the challenge of moving forward at 5-5 and winning a divisional game on the road.

All of which begs the question: How will the Steelers bounce back?

"We just gotta keep our composure," Hilton said. "We still got a lot of season ahead of us. We got six games, so we know where we want to be at the end of the season, so we can't have little things like that throw our focus off and cause us to slip up and lose."

"I'm just looking forward to moving on," DeCastro added. "I know it's a big deal and whatnot but I think it's one of those things where it'll die down and we'll all move on."

Within it all, there's this silver lining for the Steelers: They've already battled through adversity this year — starting way back in the offseason as they dealt with Le'Veon Bell and Antonio Brown drama. That cloud dissipated quickly once both players left town, but it hung low, dark and stormy over this team for some time.

Currently, the Steelers are still 5-5, they're alive in the AFC Wild Card race despite starting 1-4 and, yeah, despite all those injuries, too. They definitely don't help, but they haven't totally broken this team's back, either.

If the offense can come around and find something, this could realistically be a playoff team, a point not lost on Hilton. I asked him if he's ever been a part of such a volatile season, and he chuckled before offering the following:

"Not in a long time," Hilton said. "But especially with a lot we've been through this whole year, I love the resiliency of this team. We're still in a position to make the playoffs. We just gotta take care of business."

That starts Sunday against the 0-10 Bengals. Win that one — as everybody has vs. the Bengals this year, including the Steelers at Heinz Field — and suddenly the injuries, the Browns drama and all the negativity swirling right now will seem just a little more distant.