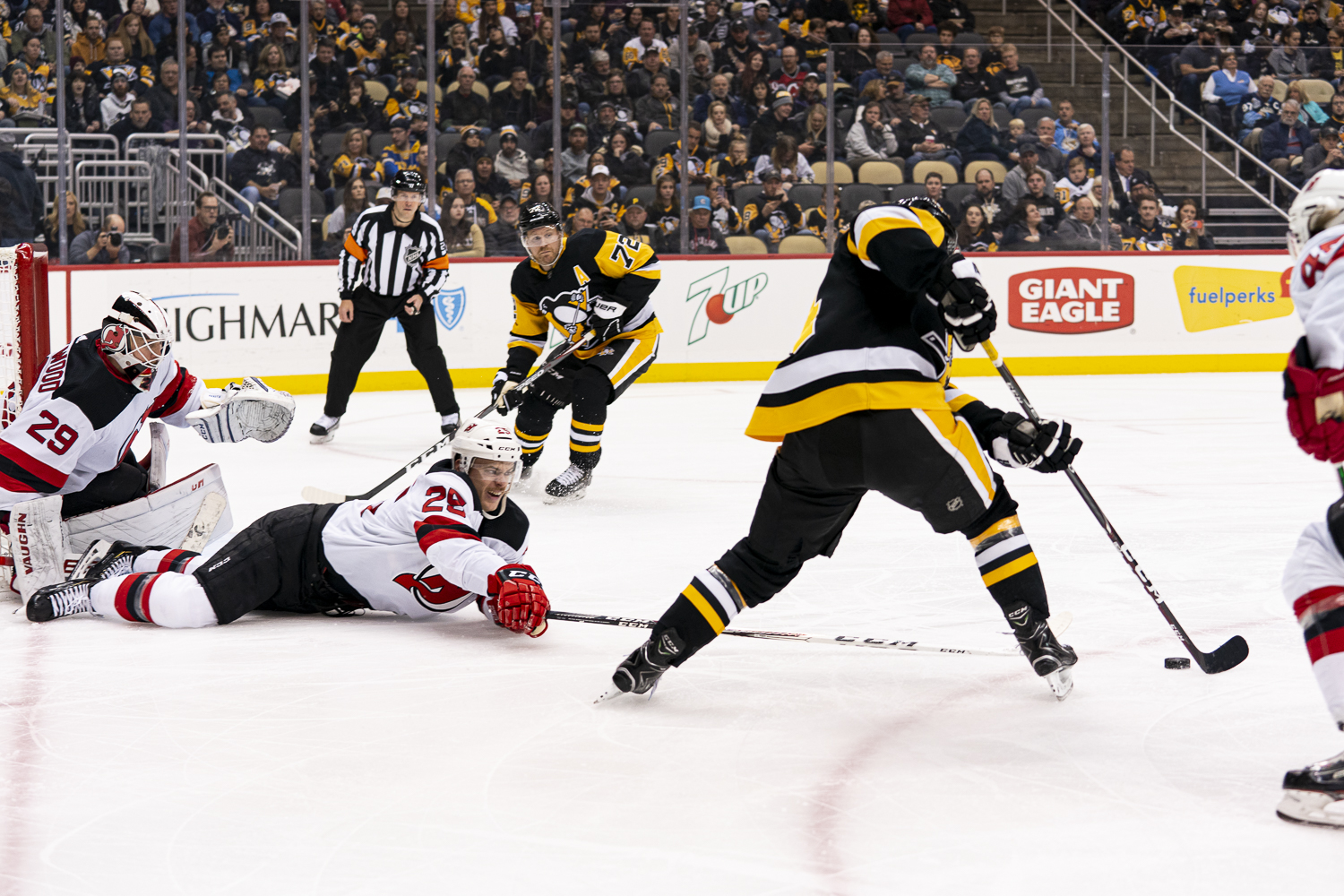 There were times early this season -- lots of them, really -- when Dominik Kahun didn't seem to have a very good grasp of some things.

Like, you know, how to play ice hockey at a professional level.

He moved around the ice slowly, and rarely accomplished anything when he finally got where he was going.

When Kahun had been acquired from Chicago for Olli Maatta a few months earlier, management floated the notion that he might be a nice fit on the right side with Sidney Crosby and Jake Guentzel. For a significant chunk of October, though, Kahun performed more like a spare part on a rec league team than a first-liner in the NHL.

But for the past few weeks, Kahun has looked very much like the guy Jim Rutherford believed he was getting from the Blackhawks: Fast and shifty, creative and productive.

He flashed those qualities -- and probably a few others -- while scoring the Penguins' first goal in their 4-1 victory against the Devils Friday night at PPG Paints Arena.

Kahun got the puck from Dominik Simon in the left-wing corner, pulled away from Devils defenseman Sami Vatanen while skating along the goal line, stickhandled around New Jersey's Mirco Mueller as Mueller slid past him in a futile effort to disrupt the play and then capped the sequence by sticking a backhander under the crossbar behind goalie Mackenzie Blackwood:

He did. And he hit it, perfectly.

Which is how he's done a lot of things lately.

And what the Penguins were hoping for when they acquired him, even if it took a bit longer for him to get acclimated to his new surroundings than they might have hoped.

"There's always an adjustment process that takes place, from the player's standpoint and the coach's standpoint," Mike Sullivan said. "When a new player comes to our team, our coaching staff is trying to figure out how to best utilize that player, within the context of the whole group. ... We always felt like Dom was a good player, has real good offensive instincts, can play a fast game. He's got a lot of the attributes that we value in players.

"As he's gotten more comfortable with how we're playing -- just the details of our team concept and just familiarity with our locker room and building relationships with his teammates and his coaching staff, as well -- I think all of that helps a player. Especially a young player like Dom.

Which is certainly not the kind of player he looked to be for the first half of October, and perhaps a bit longer.

"It took me maybe like five games into the season, then I started picking up," Kahun said. "I played better hockey, and right now, I feel like myself."

The Penguins dominated the first period and never trailed after Kahun scored, but that was mostly because of some inspired work by goaltender Tristan Jarry during the second period.

Although New Jersey outshot them, 20-14, during those 20 minutes, the only puck that eluded Jarry came off the stick of Taylor Hall during a power play 31 seconds after the first intermission.

"Tristan made some timely saves for us," Sullivan said. "That's what you have to have to win in this league. He's done that the last couple of starts."

That much defies dispute. What's less clear is whether Jarry, who finished with 36 saves, has done enough to convince the coaches to increase his workload. So far this season, his starts all have come when the Penguins were playing on consecutive days.

"It's not my decision," Jarry said. "Whenever I'm called upon, I'll make sure I'm doing the best, and make sure I'm ready. Other than that, I can't do too much."

True, but he already has made a positive impression on the coaching staff by upgrading his practice habits, as was strongly suggested after last season.

"We felt as though his attention to detail and his focus in practice will translate to a more consistent game," Sullivan said. "That's been one of the hurdles Tristan has to overcome to establish himself as a bona fide NHL everyday goaltender."

Jarry certainly looked the part on this night, and his teammates reciprocated by getting him a couple of insurance goals early in the third period. Jake Guentzel had given them a 2-1 lead by scoring on a breakaway at 12:27 of the second, but third-period goals 25 seconds apart by Jared McCann (2:05) and John Marino (2:30) choked off any thoughts the Devils had of making a comeback.

"Putting them away early was big," Marino said.

It meant that the Penguins didn't have to worry about fatigue from playing on back-to-back days being a major factor in the outcome, and gave them a bit of a margin for error. Which, as it turned out, they didn't need, in part because Kahun has settled into being the player the coaches and front office believed he could be.

"We always felt that Dom has the attributes to play the kind of game that we're trying to play," Sullivan said. "We felt that it was a matter of time."

And Kahun's time, it seems, has come.