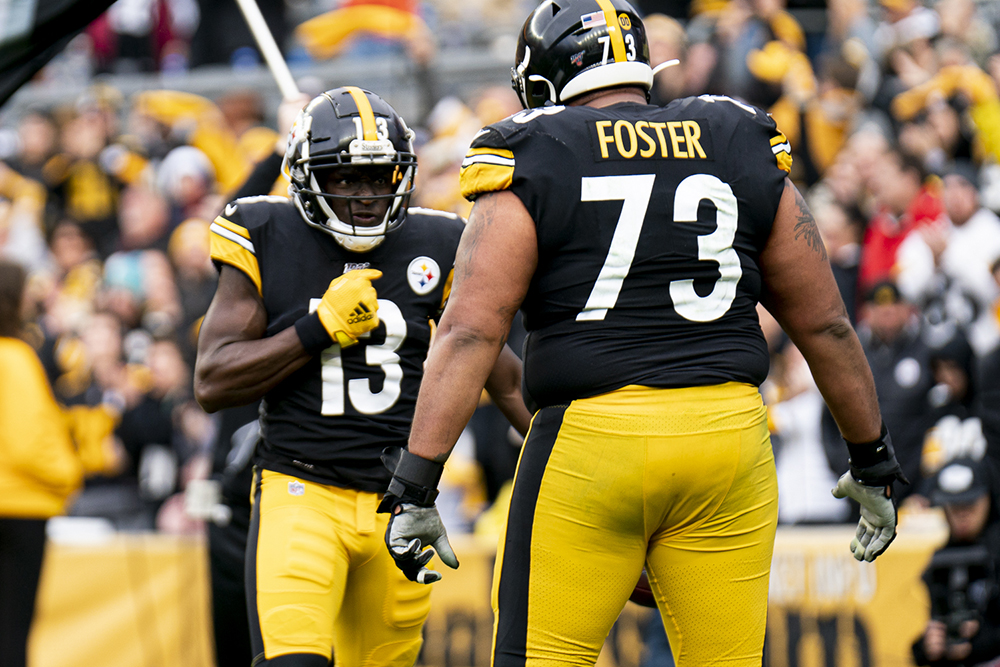 It's funny what a play or two can mean.

In this case, it was the Browns' Sheldon Richardson jumping offside and giving the Steelers a free play. To that point, the Steelers had nine yards of total offense on eight offensive plays. But Devlin Hodges and James Washington saw a chance to make something happen when Richardson jumped into the neutral zone.

Washington's job once he sees that is simple.

"You just go deep and hope Duck throws it," Washington told me.

Washington did and Hodges did. And it turned into a 31-yard play that kick-started the Steelers offense in their 20-13 win over the Browns at Heinz Field.

"It was a heck of a play by James. I think it was on an offsides call, so we had a free play," Hodges said. "We took advantage of it and it was a little spark to get us going."

From there on out, the coaching staff saw something. They saw a spot where they could continue attacking the Browns, who were playing a lot of single-high safety and daring the Steelers to throw it deep outside the numbers -- much like other teams have most of the season. In this case, the Steelers made them pay. Again and again, with Washington and Hodges hooking up on three deep balls of 30 or more yards.

It's not that the Steelers hadn't been trying those plays. They just hadn't been connecting on them. Maybe it's Hodges. Maybe it's the fact they're finally doing it with the right guy now -- Washington instead of Johnny Holton.

Hodges doesn't have a great arm. In fact, if you measured it against the other 32 players who started games in Week 13, it would probably be in the bottom five.

But he does anticipate and see things well. And that will carry you -- at least until opposing defensive coordinators figure out what you can and, more importantly, cannot do.

Maybe that had happened to a certain degree with Mason Rudolph. Perhaps defensive coordinators had figured him out a little bit.

Regardless, they haven't figured out Hodges just yet. So the Steelers might as well keep riding that horse until he falls down.

And if that means throwing deep balls, keep throwing them.

• Should the Steelers have opened things up offensively before that? Well, it's kind of hard to do when you only run six plays in a quarter, as the Steelers did in the first 15 minutes Sunday.

Like most teams, the Steelers script their first 10 or so plays. But knowing that, defenses also change things up.

"The first game they probably played us a little bit more in man coverage, and in this game, they played more in zone," Hodges said.

Coordinators also do things to test the defense and see what a defense shows when you put difference packages or looks on the field. The idea is to get first downs and points while probing the defense.

Without a star quarterback to fall back on to convert some of those third-and-long plays when things don't work, however, the Steelers have had a difficult time of it.

The Steelers have now scored just three points on their opening drive of a game this season, that coming against the 49ers back in Week 3. They also have just four first downs on their first possession of the game, which is far less than ideal.

Those are the halftime adjustments some fans say this coaching staff does not make.

• For those keeping track, the defense has given up 16 points -- one touchdown and three field goals -- on opening drives of the game and 14 points -- two touchdowns -- to opponents on their first drive of the second half.

And the two scores they have allowed came against the Patriots and 49ers. The Steelers have now gone nine games without allowing a score on the opening possession of the second half.

• Benny Snell's 11-yard run off the goal line in the fourth quarter might have been the single biggest play not just in this game, but in the season.

We've seen the Steelers give up a couple of safeties this season because they didn't believe they could run it in those situations effectively. But given that Snell was pretty consistently gaining yards when he was running north and south, Randy Fichtner obviously had no problem calling that run from his own 6-inch line.

A QB sneak to gain a little breathing room would have been the safe thing to do. But Fichtner called for a deep handoff to Snell, trusting the rookie to get the ball out of the end zone.

"It was one of our bread-and-butter plays, really," Ramon Foster said. "We blocked it and Benny just hit it well. He made a play. It wasn’t anything special. We couldn’t have a negative play or a holding call. We did it."

Sometimes, you just have to go back to the basics. Don't get too crazy. Don't get exotic. Do what your guys do best.

Problem is, with so many young guys playing on this offense, the coaching staff is still trying to figure that out in many cases.

• But hey, it's working. The Steelers are 7-5. And now it looks like a two-team race for the final playoff spot in the AFC.

The Browns, at 5-7, are basically done, though they're not officially eliminated. The Raiders and Colts took big steps back, with both falling to 6-6. Oakland is 1-5 on the road with two games away from the Black Hole remaining, while the Steelers are essentially two games up on the Colts because they beat them earlier this season.

Tennessee is playing really well but has a tester against the Raiders in Oakland next week. The Raiders are 5-1 at home, even after getting thrashed there Sunday by the Chiefs. After that, the Titans have home and away games against the Texans sandwiched around a game against the Saints.

This Steelers team has shown it can play with anyone. But it's also capable of losing to anyone.

After Sunday's games, however, upcoming contests on the road against the Cardinals and Jets, who lost by a combined score of 56-13 to the Bengals and Rams, respectively, don't sound that terrible.

And the Ravens might not need to win the regular season finale in Week 17 and could be resting people.

There's still a game against the Bills in there in two weeks. But it's at home, where the Steelers have recorded 35 of their 43 sacks this season and are plus-10 in turnover ratio after beating the Browns. It also officially been flexed to the Sunday night game, and we know how well the Steelers do in those situations.

Yeah, the playoffs are a realistic situation for this team. 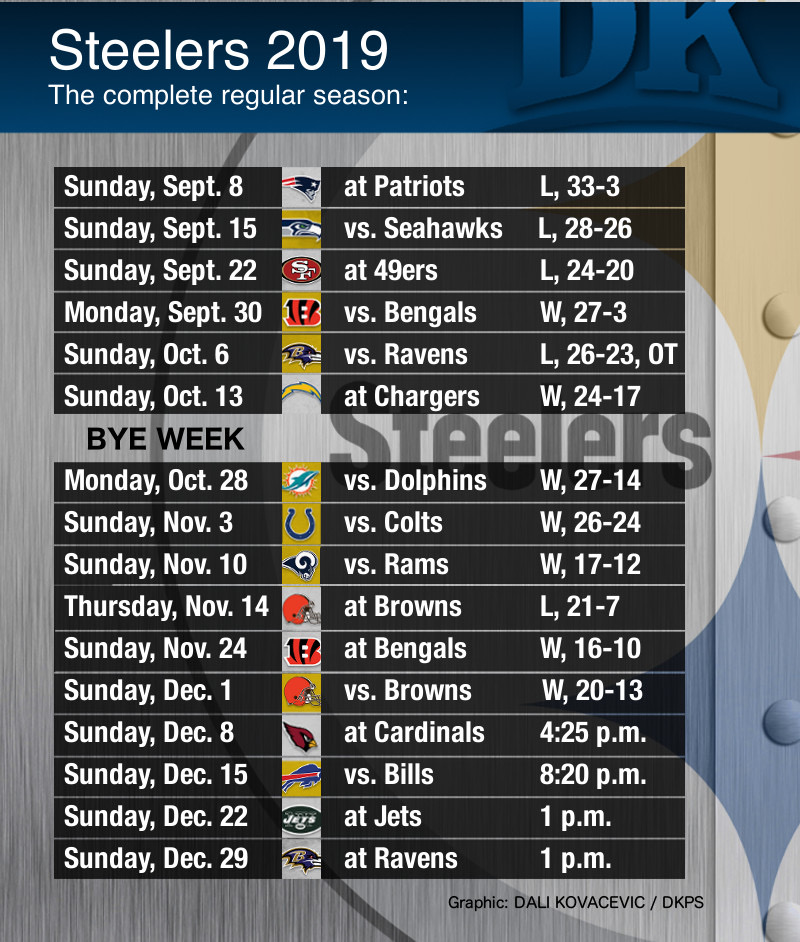 • Given that the Steelers have cobbled together a running game the past two weeks, rushing for 284 yards in their past two games, who says this team, with this defense can't at least win a game in the postseason?

And that's been without James Conner, who has a chance to be back next week against the Cardinals.

I've said all season long the Steelers just need league-average quarterback play to win games this season. If they get something more than that, it's gravy.

That's what Mike Tomlin is talking about when he says Hodges "can't kill us."

After all, who can forget Jacksonville making the AFC Championship in 2017 with a very good defense, a running game and a quarterback who didn't kill them?

• How good has Washington been in the past five games? How about this good: In his past five games, Washington has caught 20 passes for 417 yards and three touchdowns, an average of four receptions for just over 80 yards per game.

More impressively, he's only been targeted 27 times on those 20 catches, which considering the average depth of the targets is really extraordinary.

And that's with both Rudolph and Hodges throwing him the ball. Washington has been efficient and explosive regardless of the circumstances.

"James is trying to become a guy, and I like it," Foster said.

Maybe not THE guy, but A guy. He's certainly living up to that status as a second-round pick.

Diontae Johnson, who was basically this year's second-round pick -- even though he was an early third -- is struggling through some of the same issues Washington had last season, making some rookie mistakes.

Hodges' interception, however, was not Johnson's fault, at least according to Hodges.

"It was just me trying to force it a little bit, overthrowing Diontae Johnson," Hodges said. "It's a play I wish I could have back."

That said, Johnson is going to hear about it from the coaching staff Monday for not making a better effort there. And for running out of bounds late in the fourth quarter. And Hodges will hear about it for throwing the ball away instead of just getting what he can and taking a sack coming out of the two-minute warning with the Browns having used all of their timeouts. Or leaving the pocket too quickly and always flushing to his right.

Teachable moments, which are a heck of a lot more fun to go over coming out of a win than they are a loss.

• Those kind of teachable moments are more fun than what Freddie Kitchens is trying to do -- teach a team of high-priced me-first stars how to win a big game.

According to reports, both Odell Beckham Jr. and Jarvis Landry bolted out of the locker room after this game without speaking to anyone. The Browns did a lot of talking during the week leading up to this game.

But they certainly didn't walk the walk.

From the mouths of babes.

• Kerrith Whyte gives the Steelers a legitimate kick returner. Johnson gives them a little pop as a punt return -- though he still makes the coaching staff hold its collective breath there.

And the coverage teams are top-notch, as are the kickers.

FootballOutsiders.com had the Steelers' special teams ranked ninth in the league coming out of last week's game against the Bengals.

The bet here is that they might move even a little higher after this game. The Browns averaged 12.0 yards on three kick returns. Not punt returns. Kick returns. And they had one punt return for five yards.

Who knows what the future has in store for the young man. But make no mistake about one thing: He's having fun.

He was introduced last on the offense before this game and got a big cheer from the Heinz Field crowd, so loud, he said, that he couldn't hear his name.

"It felt a little different because I knew I was playing at home," he said of the start. "I knew there was a bigger expectation. I think I took it in well. I was just really excited to come out here and have the opportunity to play football. Football is fun, football is really fun, and it's always great when you get the win."

Perhaps Washington put it best when not only talking about himself, but everyone on the offense.

"We don’t need to go out there and be superheroes," Washington said. "Just go out and do what we’ve been doing all week. It’s the same thing in practice. Just play the way you play in practice."

Share
Tweet
Email
Hodges plays ‘his tail off,’ goes for the kill ☕
Wilkes-Barre Watch: Palve gets his goal