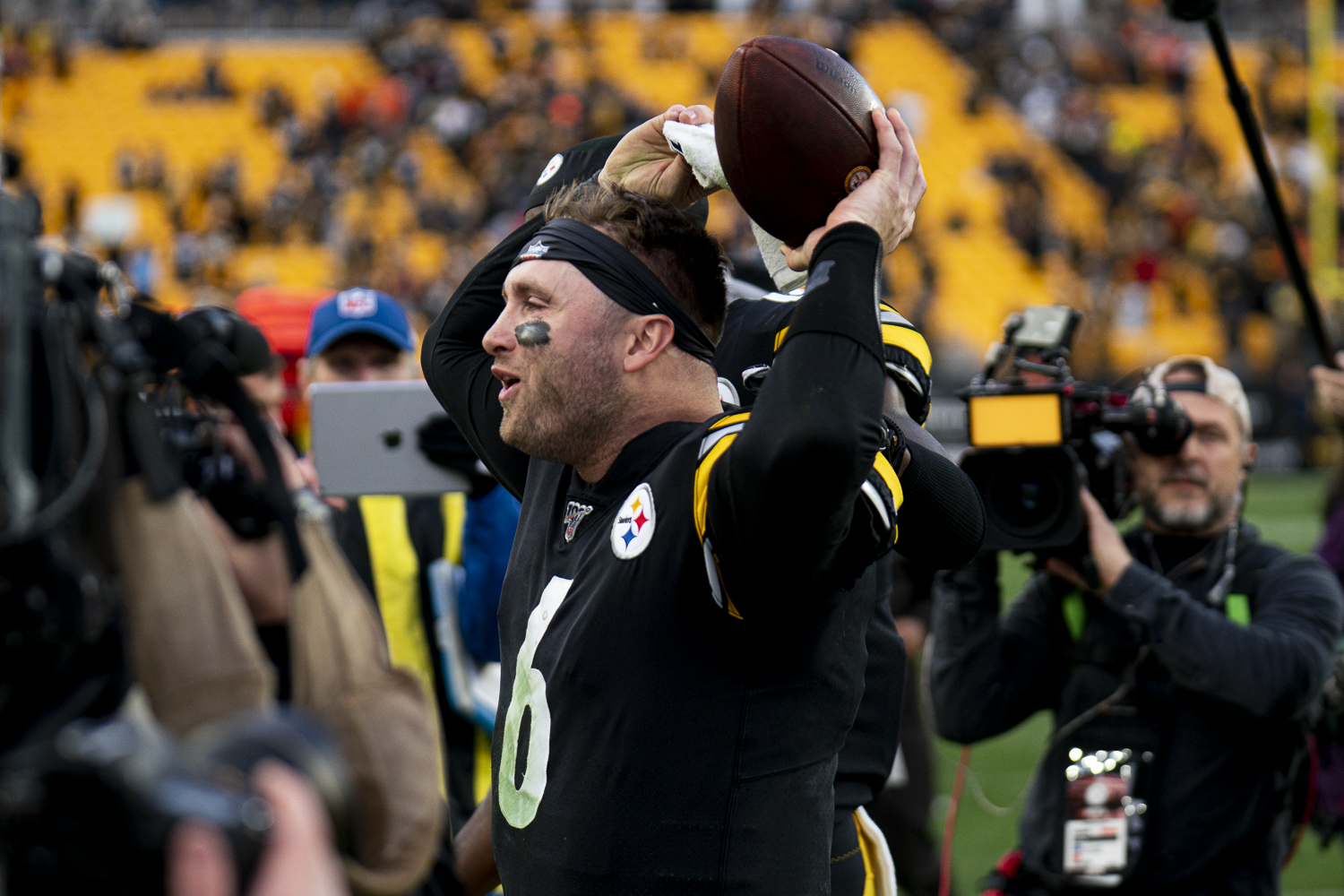 Mike Tomlin confirmed Tuesday what he had intimated Sunday: Devlin 'Duck' Hodges will get his second consecutive start at quarterback for the Steelers when they travel to Arizona to face the Cardinals.

Given how Hodges, an undrafted rookie, has played in his short stretches, and perhaps more important how badly Mason Rudolph has performed away from the friendly confines of Heinz Field, it's not all that surprising.

The Steelers (7-5) currently hold the sixth seed in the AFC playoff rankings. But they've been far from road warriors this season. The team is just 2-3 away from Heinz Field this season, losing games at New England, San Francisco and Cleveland, while winning at Cincinnati and Los Angeles against the Chargers.

The one commonality in those two road wins has been the performance of Hodges.

Ben Roethlisberger started the team's season opener against the Patriots and threw for 276 yards, but also failed to have a touchdown pass while being intercepted once in a 33-3 loss. Rudolph, who replaced Roethlisberger after halftime of the team's Week 2 loss against the Seahawks, hasn't fared much better on the road, posting a passer rating of 50.9 away from Heinz Field, compared to a 95.3 rating in home games, where he led the Steelers to a 4-1 record.

Hodges, meanwhile, has a passer rating of 97.5 on the road, leading the Steelers to a win against the Chargers when Rudolph was recovering from a concussion, and helping the team come from behind in the second half two weeks ago against the Bengals after Rudolph was pulled.

Of course, there were a lot of Steelers fans in the stands in both Los Angeles and Cincinnati, something that played a factor in the team's success. Hodges wasn't exactly working in, as Tomlin likes to call it, a "hostile environment." It could be a similar setting in Arizona, where there is expected to be a large contingent of Steelers fans.

"I know generally when we go out west, Steelers Nation shows up, so I won't be surprised if they do," Tomlin said.

But other challenges await even if there is a big contingent of Steelers fans at State Farm Stadium.

The Steelers have already played seven of their eight home games this season, with only the only game remaining at Heinz Field being a meeting with the Bills in two weeks. The Steelers still have road games remaining after this game in Arizona at New York against the Jets and in Baltimore to finish off the regular season.

Those games could create that "hostile environment" to which Tomlin refers and the challenges that go with it.

"The communication issues that come with the environment," Tomlin said of the biggest issue on the road. "It's tough for a veteran quarterback in hostile environments to execute the communication in a hostile environment with people. Just handling the things that take place before the snapping of the football, it gets doubly challenging when you lack experience in that area. It's a natural challenge that you overcome by living and playing in it. We acknowledge that is an issue and we'll work our tails off to prepare (Hodges) for it. He'll do that. Ultimately, he'll get better by doing it."

Considering the Steelers were penalized five times for false starts against the Browns at Heinz Field, that could be an issue.

Even Hodges was called for one of those false starts.

"We've got to be better there," Tomlin acknowledged. "It was catastrophic almost to our efforts in a lot of instances. That's one area of play that needs to improve."

That likely won't get any easier on the road. But playing big games on the road aren't new to Hodges. Any time he faced some of the bigger schools he played against when he was the quarterback at Samford, such as Florida State, those games always came on the road.

Of course, the NFL is different. And Tomlin is, as he has been all season whether the quarterback has been Rudolph or Hodges, been trying to establish a confidence in those young players.

Because of the way he wants to display that confidence, Tomlin hasn't been spending extra time in meetings or practices with the quarterbacks.

Hodges completed 14-of-21 passes for 212 yards with one touchdown and one interception against Cleveland.

"We give him the attention a starter appropriately deserves. But we're not giving him any additional attention," Tomlin said. "I'm thoughtful about my interactions with people. We always say the right things, but do our actions match our words? I told Duck I had a lot of confidence in his abilities and preparation and talent. I wanted to display that confidence by not talking him to death, not having a bunch of additional meetings. I wanted to display that confidence by going about our routine. He's a starting quarterback. We interact with him in the ways we interact with a starting quarterback in preparation for a game."

Things might be a little easier with the return of center Maurkice Pouncey from a two-game suspension. The Steelers have until 4 p.m. Wednesday to activate Pouncey to the 53-man roster and are expected to do so.

But, Tomlin was less optimistic regarding the status of injured wide receiver JuJu Smith-Schuster and running back James Conner, calling both questionable. He did, however, say Conner, who is recovering from a shoulder injury, could practice in some fashion Wednesday.

Conner, who has missed four of the past five games, was limited in practice late last week, while Smith-Schuster has missed the past two games with a knee injury.

The Steelers need a solid effort by their passing offense in this game against the Cardinals' 32nd-ranked pass defense. This isn't a game where the passing game can just be OK. It has to shine.

The Steelers have just eight of their 43 sacks this season on the road. A big reason for that is because of the quarterback play they have gotten away from Heinz Field. If they have a lead, the pass rush can get going. But if they're playing from behind, that doesn't happen.

Cardinals quarterbacks have been sacked 42 times this season.