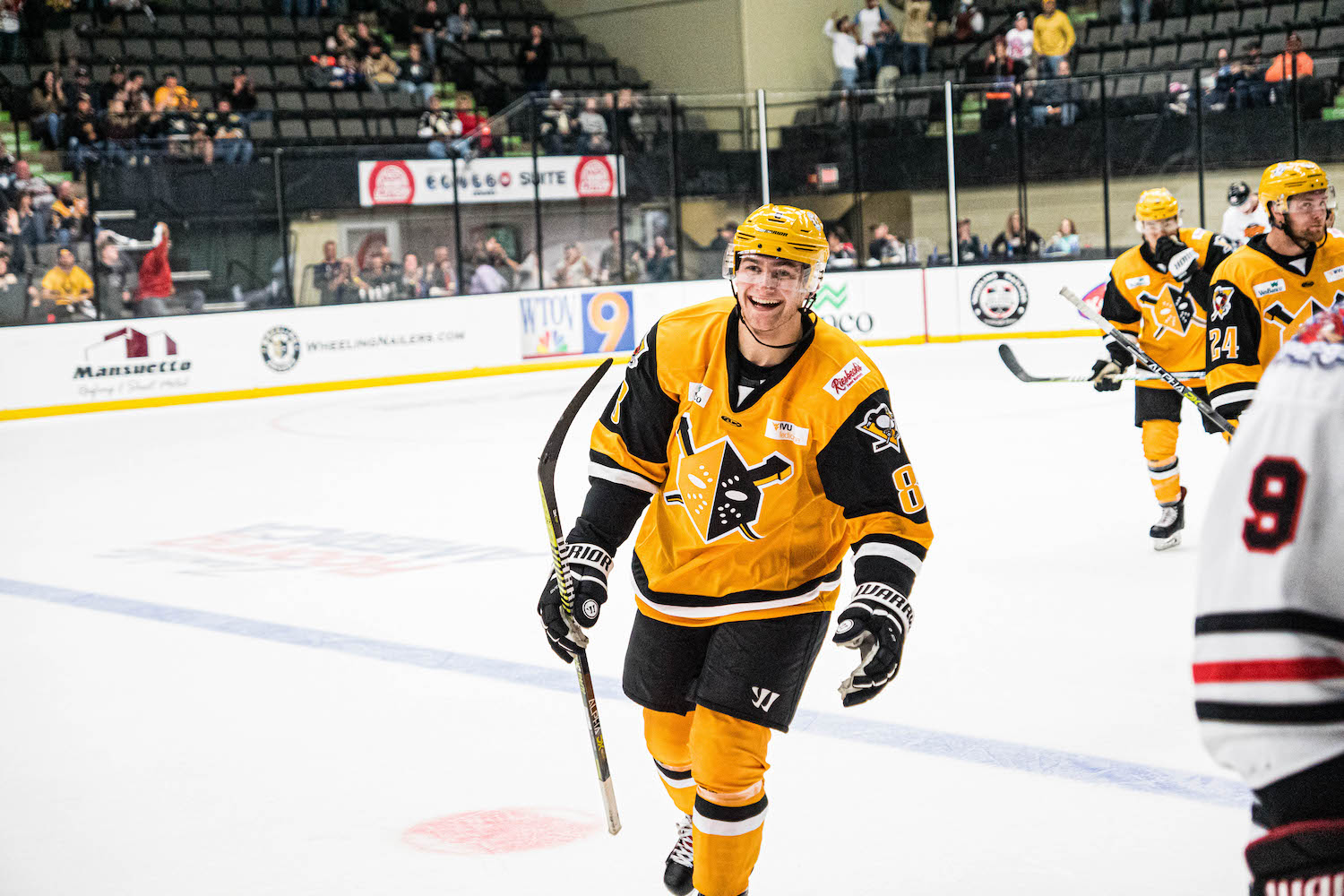 The Nailers have had an unlikely hero in a few games this season.

The first game-winner was Siebenaler's first goal of the season in a 4-3 win over the Indy Fuel on Oct. 19, scored with only 23 seconds remaining in the game:

A month later on Nov. 19, Siebenaler scored the game-winner in a 4-3 win over the Cincinnati Cyclones, sealing the win with just five seconds remaining in the game.

In the Nailers' next game three days later, he did it again again. He broke a tie against Indy with 1:23 remaining to pick up his second game-winner in as many nights:

"To be honest, I've only had three game-winners in my career playing hockey and they've all happened in the last two months," he laughed when I asked about his recent late-game heroics. "So it feels good."

Siebenaler, 23, is a fourth-year pro, and this is the first year in which he's began the season in the ECHL. In his first three professional seasons, he played with the Blue Jackets' AHL affiliate in Cleveland, where his role was limited and he was often a healthy scratch. At the pro level, he's never been much of a point producer. He scored three goals and three assists in 43 games in his 2016-17 rookie season, and again scored three goals and three assists in 23 games the following year before his season was cut short by shoulder surgery.

A quarter of the way through this season, Siebenaler leads all Nailers defensemen in scoring with five goals and five assists in 18 games. His latest goal on Nov. 27 against the Komets in his hometown of Fort Wayne:

Siebenaler, 6-foot-2 and 207 pounds, credits a few things for his recent offensive success. He's being given more minutes and being trusted in more situations at the ECHL level than he ever had in the AHL, and he's actually thinking about scoring less.

"I'm getting a ton of opportunity, playing more minutes, playing PK, getting put out there in situations that I haven't before. It does a lot for me mentally," he told me. "I feel like the less I think about getting points, they just fall into my lap. In those situations where I end up scoring in the last minute, I'm not even thinking about it. Then the next thing you know, the puck is in the back of the net. The more I focus defensively the offensive comes with it."

This is what Siebenaler was looking forward to getting when the Penguins acquired him last year and assigned him to Wheeling. When I spoke to him at the time, he called it his "fresh start." His stint in Wheeling last season ended in March, in his seventh game, when he was cut by a skate blade just above the knee. The cut required stitches, and his leg was in a brace for a month. Once he was able to move the knee again, it took about two weeks for Siebenaler to get the mobility back to where he needed it to be.

"It was a freak accident," he said. "One in a million, it was ridiculous."

He was disappointed that his start in his new organization was cut short, but he worked to stay positive over the summer.

"That really sucked," he said. "I was really excited, too, because I finally had a chance to come here and play. I had shoulder surgery two years ago and I knew how tough that was. I got down on myself. I knew that if I stayed positive and have a good attitude it would end up working out in the long run. I had a good summer, I felt good coming into this season."

Siebenaler was re-signed to an AHL contract over the summer, and cut from Wilkes-Barre at the end of camp. After everything he's been through, though, he doesn't see the ECHL as a demotion. He just wants to play.

"If you get sent here from the AHL and you look at it as a demotion, the league will chew you up and spit you out," he said. "You have to come down here with a good attitude. If you're ready to work, good things will happen from there."

Now that Siebenaler has actually been able to play regularly, he's pleased with what the Nailers and head coach Mike Bavis have been able to do for his game.

"I haven't had a coach before who trust me and let me play my game," he said. "(Bavis) always says he doesn't want to take the stick out of guys hands. He's really understanding, he understands how we work. He's such a good players coach. He's really good for us."

Nine of the Nailers' last 12 games have been decided by only one goal, and five of those have been decided in overtime. Secondary scoring from players like Siebenaler has been crucial over this stretch, and will be a difference maker at the end of the season in the tight Central Division standings.

"It sucks being in one-goal games and playing in overtime as many games as we had, but we work hard as a team," he said. "You see everyone's true colors when we're in situations when we're fighting to stay in the lead or fighting to tie the game or win it. Everyone comes together."

• Forward Justin Almeida was assigned to the Nailers on Nov. 25. He's played in four games since the assignment, recording one goal and one assist.

• Nov. 27: vs. Fort Wayne, 5-4 overtime loss
After a scoreless first period, the Komets scored the game's first goal at 5:13 of the second period, a shorthanded goal. Brandon Hawkins answered 2:17 later with his fifth goal of the season to tie the game. The Komets scored 38 seconds later to regain the lead, and the Nailers again tied the game 1:32 later with Ryan Scarfo's fifth of the year. Siebenaler gave the Nailers the lead with 40 seconds remaining, his fifth goal of the season.

Renars Krastenbergs extended the lead to 4-2 early in the third period, also his fifth goal of the season. The Komets scored two goals 1:18 apart midway through the third period to force overtime.

The Komets scored with four seconds remaining in overtime to win the game.

Brandon Hawkins led the Nailers with seven shots on goal.

The Nailers went 0-for-3 on the power play and 4-for-4 on the penalty kill.

• Nov. 28: at Fort Wayne, 3-0 loss
The Nailers allowed two power play goals in the first period and another power play goal in the third to win the game.

The Nailers were outshot, 32-20, and Krastenbergs led the team with four shots on goal.

Jordan Ruby took the loss with 29 saves on 32 shots.

• Nov. 30: vs. Kalamazoo, 4-1 loss
The Wings opened the scoring 7:31 into the game, and Scarfo's sixth of the year tied it with 1:43 remaining in the period. The Wings took the lead in the final minute of the period.

The Wings scored a power play goal in the second period and another goal in the third to seal the win.

Yushiroh Hirano led the Nailers with five shots on goal.

The Nailers went 0-for-1 on the power play and 2-for-3 on the penalty kill.

• Dec. 1: vs. Toledo, 5-4 loss
Almeida scored 3:42 into the first period to open the game, his first ECHL goal. The Nailers carried the 1-0 lead into the first intermission.

The Walleye scored three goals in under five minutes early in the middle frame to take the lead, and then Hirano cut the Walleye lead to one goal with his fifth goal of the season. The Walleye regained the two-goal lead with a power play goal before the end of the period.

Spencer Trapp led the Nailers with five shots on goal.

The Nailers didn't receive a single power play in the game. They went 1-for-2 on the penalty kill.

• The Nailers’ record of 8-8-4 has them sitting in fourth place in the six-team Central Division, eight points out of first place.

• The Nailers will have a three-in-three this week. They'll host the Kalamazoo Wings (6-10-2) on Friday and Saturday, and the Toledo Walleye (11-6-1) on Sunday.

Krastenbergs has a great shot:

An Almeida shot trickled in for his first ECHL goal:

Hirano's shot bounced high up in the air and landed behind the Walleye goaltender. Hirano celebrated by getting the monkey off of his back:

Brad Drobot drops the gloves with Kyle Haas. 6:45 left in the 1st. pic.twitter.com/6WH7cqF60E