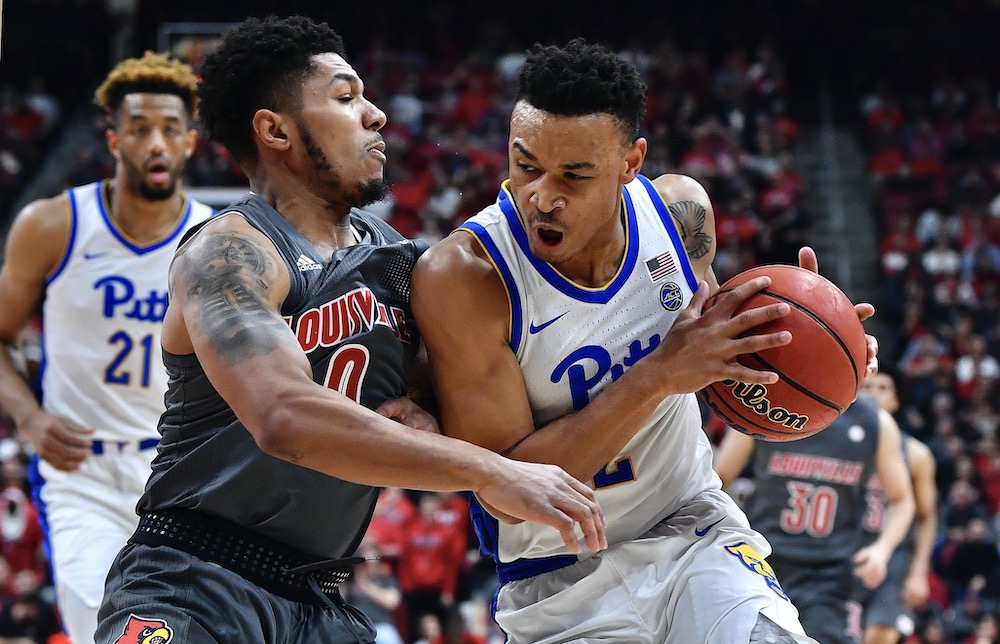 But, man, does it make for some interesting, insightful basketball.

On this evening, Pitt was doing that "almost" stuff — down five, 47-42, with nine minutes to go in the second half on the road against No. 1-ranked Louisville. I'll spoil the story for you: Pitt lost, 64-46. That five-point margin was as close as the game got in the second half, this after the road underdogs entered halftime down 14, 35-21.

The young Panthers squad was chipping and fighting — and it was working. Trey McGowens roared after a made Au'diese Toney layup just feet in front of media seated courtside with 13 minutes to play, and the crowd fell silent.

Was it happening? Could it actually be happening? You could feel those questions lingering as the upset watch wound its timer.

"They play with a swagger," Louisville coach Chris Mack was saying of this 2019-20 Pitt team after the game. "They play with a toughness. They're going to win more games than they did a year ago. We knew that coming in."

They sure will win more than last year, when they came out on top 14 times. They're already halfway there, now 7-3 after the loss against this top-ranked Louisville squad on Friday.

But let's rewind for a minute.

Because when that Pitt squad sat just two baskets away from taking the lead inside the KFC Yum! Center, it felt — if only for a second — the improbable really could happen.

Then Toney poked the ball away from Louisville's top dog, junior Jordan Nwora, near halfcourt, resulting in a mad scramble for the loose ball as it trickled toward the Pitt basket. They dove, and a foul was called.

And the Pitt bench knew it, too, drawing a technical foul in the process of their protest. Capel threw his hands up and stormed the sideline as well, prompting me to initially think it was actually him who received the technical foul. Officially, though, it was on the bench, and that was it.

That was as close as the game got on this night in Louisville. Capel was asked afterward to expand on that pivotal sequence. Did he receive any explanation?

"Well one was a regular foul," Capel deadpanned after the game. "Then there was a technical foul call and that was on our bench."

Yeah, nothing there. So let's turn to Xavier Johnson, who was a little more direct with the response.

"I mean, I think we were down five, and [Au'diese] took the ball and the ref called — I'm not gonna disagree with the call, but the ref called a bad call and we got a tech," Johnson said. "And we didn't respond after that."

It was a bad call, no doubt.

But you can't blame the game on that. Not when you lose by nearly 20. Johnson knew it — it's right there at the end of his quote — and so did Eric Hamilton, who continued his strong play of late with 10 points, three rebounds and two charges drawn.

"Down five, eight minutes to go, I tried to tell my team [after] the technical foul, 'Let's just keep our heads,'" Hamilton said. "But unfortunately it just went the other way ... Obviously, for the momentum of the game, the momentum of the game shifted, but I wouldn't say that the technical foul on coach was the reason to why we lost. We lost because we played soft."

"It was just different," Johnson said. "You could see the ball got stagnant ... It just fell apart."

Still a third way, this one from Capel, however, was my favorite. And for my money? It's the most accurate, too:

That's it right there. Pitt was not supposed to win this game. They were nearly 14-point underdogs coming in, and to be within five, clawing out of that early deficit and silencing the crowd while putting the No. 1 team in the nation on its heels with less than 10 minutes to go was a win in itself.

"Look, we just played the No. 1 team in the nation, man, and we did some really good things," Capel was saying. " ... These guys have done a heck of a job, and now we have an amazing stretch coming up with exams that we need to concentrate and focus on. That's why they are here. And then we'll get back to resume basketball. But I'm proud of our guys. I'm proud of how we fought tonight."

Capel's proud because he knows the score, too. No coach is ever going to trot out and exclaim his happiness in the wake of a loss. Capel, who has done nothing but claw and fight himself, is no exception.

But this Pitt team was overmatched. Steven Enoch, a 6-foot-10 center, opened the game with this:

... Then he hit a three on the next possession.

Malik Williams, all 6-foot-11 of him, stretched the floor with a three of his own midway through the first half, contributing 13 points in all. That's a problem when the big men can step beyond the arc and make an impact. Then you add in Nwora and the sharpshooting Ryan McMahon, who went 3 for 6 from deep tonight, and the challenge is apparent.

Pitt just doesn't have that type of firepower. Not yet, at least. But they dug in and kept it within five with less than 10 minutes to go.

Yes, wins and losses matter. Yes, that collapse down the stretch matters. But when the box score shows a near-20-point gap in the final score, the consensus will assume the game was a blowout. This one wasn't. Pitt showed what it needed to show: Life and a real, fighting chance on the road against the best team in the country.

"It felt good," Johnson was telling me after the game. "It was an ACC-type of game. The team played hard for a good segment, just fell off for that little segment of the second half, and that's what got us. We're going to get better, keep getting better as the games go on."

Share
Tweet
Email
Site Stuff: Holiday meetup at Mike’s!
Kessel on return, tribute: ‘I love this city. I love them’