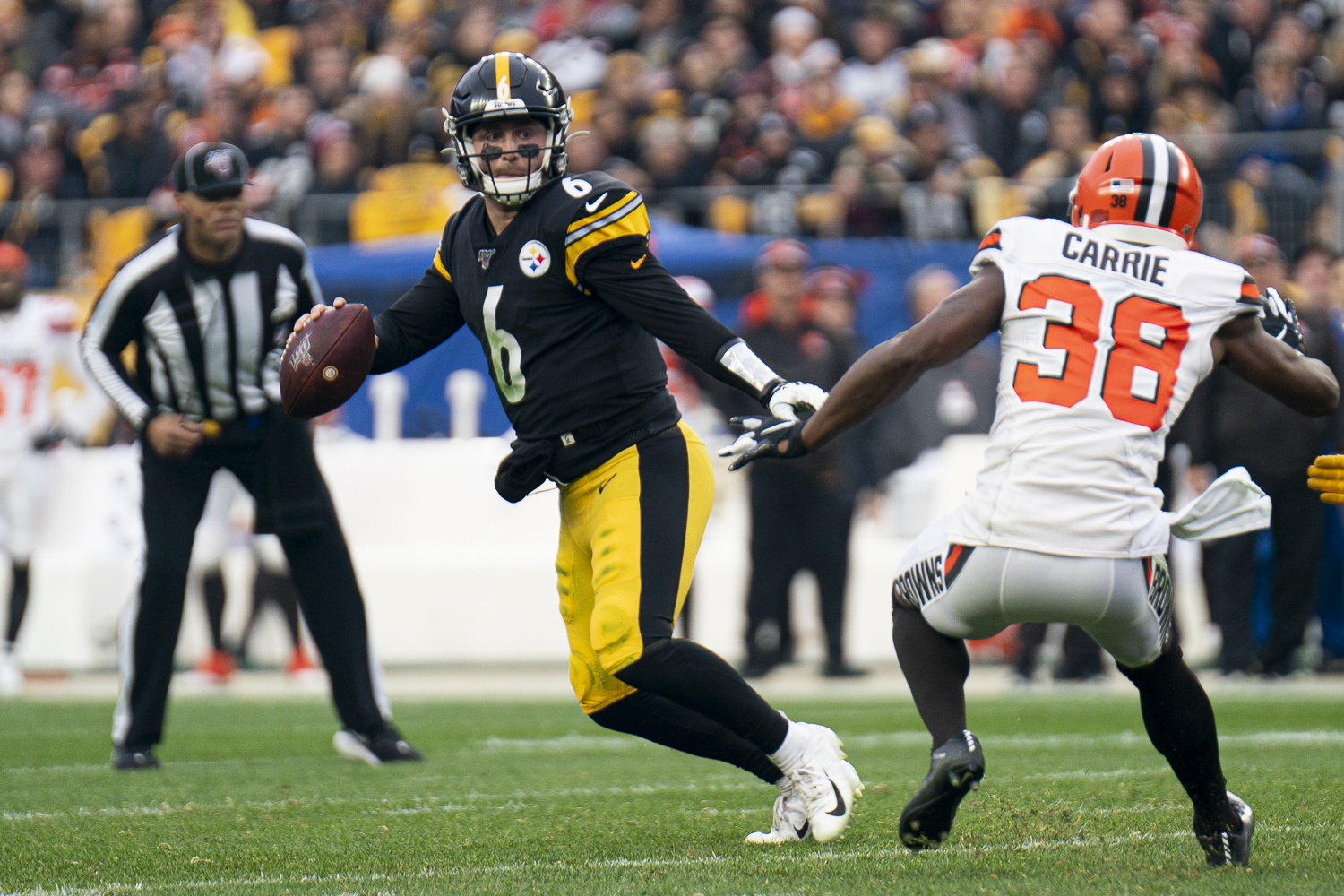 GLENDALE, Ariz. -- And a Duck shall lead them.

Digging out of 0-3 and 1-4 holes would have been one thing for the Steelers if they still had Ben Roethlisberger at quarterback. Doing so with Mason Rudolph and, now, Devlin 'Duck' Hodges, well, that's the sort of thing Steelers fans will be talking about for a long time -- if the Steelers keep winning.

They've done so 7 of the past 9 times they've taken the field since that slow start, thrusting themselves into the forefront of the chase for the sixth, and final, playoff spot in the AFC.

They moved back into that spot with four games remaining with a 20-13 win last week against the Browns, a game in which Hodges solidified his spot in Steelers lore by becoming the first undrafted rookie to win his first two starts in games not involving replacement players.

The Steelers (7-5) and Hodges can't afford to rest on their laurels, however. The Titans (7-5) and a handful of other teams remain nipping at their heels. They need a win Sunday in Arizona against the Cardinals (3-8-1) to keep pace.

Without Roethlisberger, the Steelers have had to rely on their other team leaders -- and Mike Tomlin -- to keep things together. And they've largely answered the bell week after week.

"Man, it’s not just me. We’ve got a lot of guys holding up their end of the deal," said defensive captain Cam Heyward. "I love that at the beginning of the year, everybody was counting us out. Everybody was ready (for us) to throw in the towel. Not a lot of teams come back from 0-3. We have to keep answering the call and making people regret that."

One thing Tomlin didn't regret was his decision to go with Hodges last week against the Browns in place of an ineffective Rudolph. The Steelers had gone 5-3 in games started by the second-year quarterback, but his play had deteriorated in recent weeks.

Hodges, who had earlier stepped in and started for an injured Rudolph against the Chargers in Los Angeles, threw for 211 yards and a touchdown last week against the Browns.

The Steelers are piecing things together on a week-to-week basis, even at the quarterback position. They'll play again this week without two ProBowl players — receiver JuJu Smith-Schuster and running back James Conner — meaning Hodges will continue to have an inexperienced backfield and receiving corps at his disposal.

Last week, that meant the Steelers had five different players touch the ball on offense -- including Hodges -- who weren't on their original 53-man roster to start the season.

"It’s a tip of the hat to them," offensive coordinator Randy Fichtner said. "They’ve come in and they’ve learned, they’ve listened, they’ve worked. They put themselves in position to play because we needed them, and the rest of the group accepted them, and it’s been great."

One player the Steelers will get back is center Maurkice Pouncey. He completed his two-game suspension for his part in the team's Nov. 14 brawl against the Browns and is slated to return to the starting lineup.

"Pouncey, the ultimate teammate. It is great to have him back, (there's) a lot of excitement," said Hodges.

There's also been a lot of excitement within the fan base regarding Hodges. Released at the end of training camp after earning a spot with the team via a tryout at rookie minicamp, he continues to surprise.

His teammates are enjoying the rookie's newfound fame as much as Hodges himself. And it will only continue to grow as he continues to win.

"If you would have asked me five or six years ago or the first couple games I’d say, 'Man, this is wild, a quarterback named Duck.'" Hodges said. "But now, it’s cool. It is something that has caught on and something that I have kind of embraced. It is awesome when fans come up and they are like, “Hey Duck, what’s up? Duck what are you up to?” Then if someone calls me Devlin it kind of catches me by surprise. I’m like, 'Do you know me?' It is cool. It’s unique and it kind of fits who I am."

It kind of fits this team, as well. As Heyward said, they were largely written off after starting the season so slowly and losing Roethlisberger.

A suffocating defense that has risen from the bottom of the league rankings a couple of weeks in to its current ranking of fifth and No. 1 in terms of forced turnovers with 30, hasn't hurt, either.

"We are pretty loose. Everybody’s just, get a win, get back on it," Heyward said. "We’re enjoying playing the type of ball we’re playing on defense. When a defense is having fun, that’s a way to win."