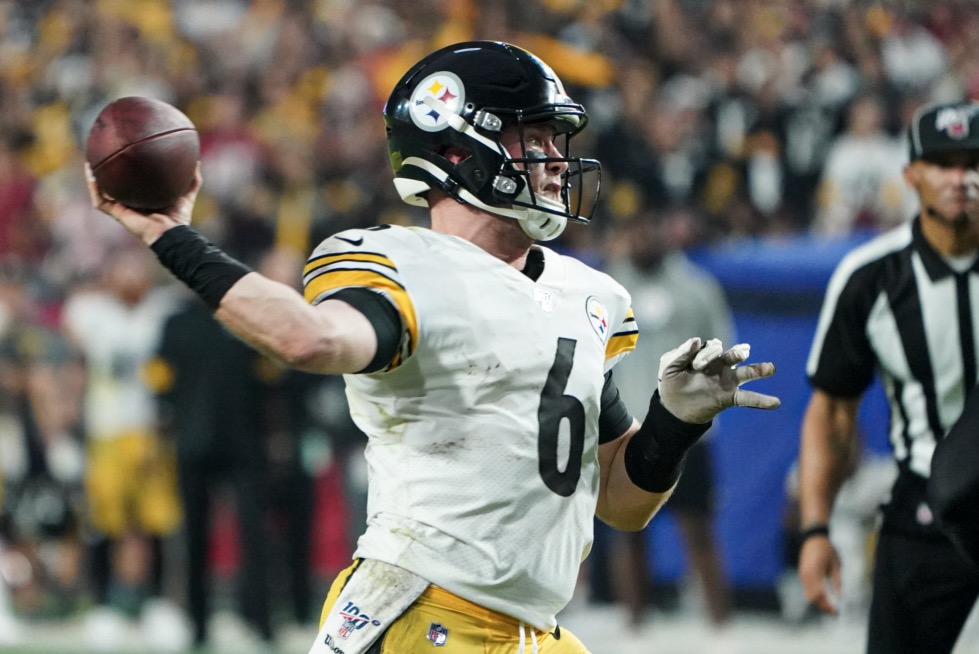 Don't say a negative word about Devlin 'Duck' Hodges on the Internet right now. Just don't do it.

Before Hodges' latest win, a 23-17 victory over the Cardinals out in Glendale, Ariz., I tweeted this:

Seeing a lot of people forgetting that Duck Hodges replaced Rudolph against Baltimore and lost. He's not undefeated in his regular-season appearances. Starts, yes, he's 2-0. But he's 3-1 in games he's played.

Many interpreted that as a "hot take" or a criticism of Hodges, and it was neither. I was simply offering a factual correction of a piece of information — that Hodges was undefeated in all professional appearances — I had seen parroted around Twitter and various articles alike.

But after Hodges' latest win, all the building hype and that stat — now 3-0 as a starter — I started thinking ...

Can this really happen? Can a guy named Duck Hodges, putting up numbers as he is, really take this Steelers team to the Super Bowl?

I turned to history.

While Ben Roethlisberger is unquestionably a Hall-of-Fame talent and an elite quarterback, earlier in his career, his statistics were more Hodges than Aaron Rodgers.

In Roethlisberger's sophomore year, for example, he took the Steelers — an unlikely No. 6 seed in the AFC playoff picture — on the road, all the way to Super Bowl XL, where they defeated the Seahawks, 21-10.

His average stat line in any given game that year:

The most important facet to consider, of course, is the sample size. Roethlisberger played in 12 games in 2005, while Hodges boasts a quarter of those starts with three.

But Hodges is more accurate and he's taking fewer sacks while also throwing interceptions at a reduced rate early on in his opportunity as the Steelers' starter.

This level of quarterback play won't win personal awards, and it won't send fantasy football managers scrambling to the waiver wire. But with a defense and a running game? It'll win games. A lot of them.

That same year, the Steelers also posted 138.9 rushing yards per game — fifth in the league — behind the play of Willie Parker and Jerome Bettis.

Here, Hodges' deck might be even more stacked than Roethlisberger's in '05.

With Hodges starting, the Steelers are also averaging 129.2 yards on the ground per game, a figure that would rank eighth in the NFL.

That's a whole lot of top-10 and top-five metrics.

Hodges' 3-0 mark has come against teams with a combined record of 14-24-1, however. That matters. He's faced poor teams and he's benefitted from a cautious game script, allowing the Steelers defense to generate turnovers and to create chances while limiting the opposition.

It's how Roethlisberger won Super Bowl XL. He was a disaster in that game, going 9 for 21 for 123 yards, two interceptions and no touchdowns. Thankfully for him, Parker and Bettis combined for 136 yards rushing and the defense forced an interception while also sacking Matt Hasselbeck three times, holding them to just 10 points in the process.

It all sounds familiar because, for the Steelers, it is. This is exactly the hand Hodges has been dealt in 2019 — but there is one massive X-factor:

At some point, Hodges is going to have to really step up. These sub-200-yard passing games and sensational defensive performances can win regular-season games against inferior opponents, but in the playoffs, Hodges will need to break out of his shell a touch.

Maintaining the comparison, Roethlisberger did it twice in those playoffs, first throwing three touchdowns and posting a 148.7 quarterback rating in the Wild Card game, a 31-17 win over the Bengals. Then, he did one better, completing 21 of 29 passes (72.41 percent) for 275 yards with two touchdowns and no picks in the AFC Championship, a 34-17 romp of the Broncos.

On top of that, Roethlisberger had, you know, a 13-0 record as a starter in his rookie year, already proving his playmaking abilities along the way.

There's no doubt Hodges' numbers will work for now. His record is proof of that. But to take the Steelers all the way? He'll need to find that next level.

He has three regular-season games left to work that out — then, barring a collapse, the real fun begins.