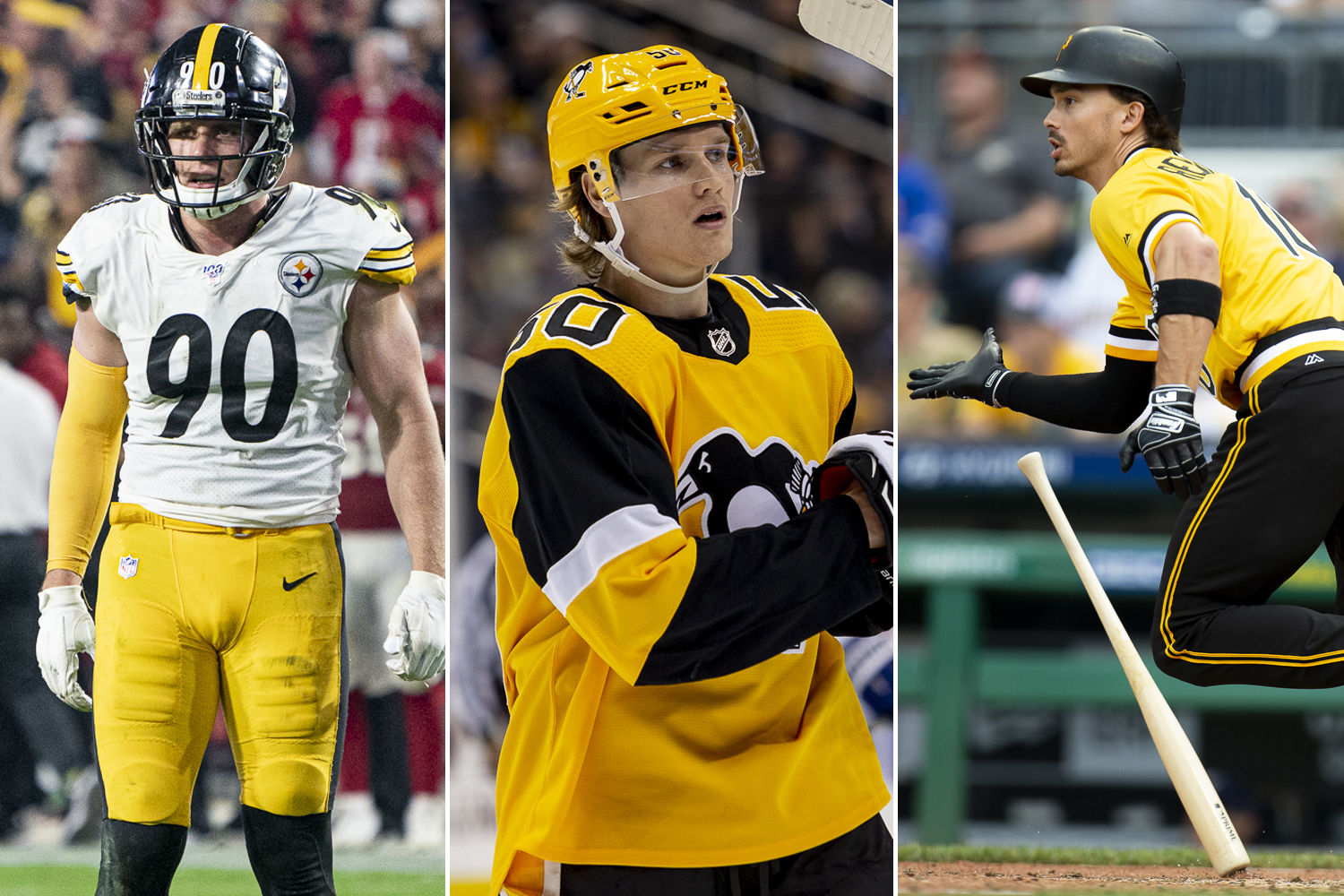 There's been a lot of talk of late of the Steelers' T.J. Watt winning the NFL Defensive Player of the Year Award.

Watt's numbers -- 41 tackles, 12.5 sacks, 12 tackles for a loss, five forced fumbles, three recoveries and two interceptions -- should certainly put him in the conversation for the award.

It also doesn't hurt that the Steelers are winning and the defense has been a big part of that, rising from being ranked 29th in total defense after three weeks to fifth going into this Sunday's game against the Bills.

But Watt isn't concerning himself about any awards.

"No. Not really. I want to win games," he told me this week. "If I can do anything I can to help win the games, that’s awesome."

Watt's older brother, J.J., has won NFL Defensive Player of the Year three times. And the Steelers have a long history of winning the award, which has been given out since 1971, as well. The Steelers have had seven different winners -- Joe Greene (twice), Mel Blount, Jack Lambert, Rod Woodson, James Harrison and Troy Polamalu. That's the most winners of any team.

Could Watt add a fourth winner for his family and eighth for the Steelers? Sure. Watt is currently third or fourth according to most oddsmakers behind reigning three-time winner Aaron Donald and Patriots cornerback Stephon Gilmore. San Francisco rookie Nick Bosa also gets consideration, though his play has fallen off in the second half. He remains the favorite to win NFL Defensive Rookie of the Year.

A big game against the Bills Sunday night -- on national TV -- could help Watt improve his stock.

But he's more about the team playing well on defense, which he proved in last week's win at Arizona. Watt dropped into coverage quite a bit and there were times when his job was to simply contain quarterback Kyler Murray in the pocket rather than rush him hard.

"More than anything, we want to collectively be the best defense we can be," Watt said. "I’m just trying to do my part on this team."

• James Washington has drawn three pass interference penalties in the past two games and we've seen Deon Cain benefit from a couple of those calls in his short time with the Steelers, as well. Washington was coming off a big game (4 catches, 111 yards and a touchdown) the previous week against the Browns, so his stat line against the Cardinals (4 receptions for 33 yards) looked a little less impressive. But those two pass interference penalties added up to an additional 39 yards for the Steelers. So even though he didn't get the catches that would have made his day look a lot better, Washington will take it. "I look at it as just helping the team," Washington told me. "It’s getting us down the field 20 or 30 yards, however far they were, closer to the end zone. And then when we get down there, we’ve got to capitalize. We’ll take it any way we can get it." It's also a sign of respect from officials. Washington feels like he's getting more of those calls than he got in his rookie season. "For sure," he said. "I’m definitely getting the calls, which as a receiver, we love." -- Lolley

• The Steelers' schedule in 2019 has included three cross country trips with games in San Francisco, Los Angeles and Arizona. That won't be the case in 2020. With the Ravens locking up the AFC North title Thursday night with their win over the Jets, the Steelers are pretty much locked in as the second-place team in the division. That means their slate of opponents -- though not the dates -- have been set. In addition to road games in the AFC North, the Steelers will play at Tennessee, in New York against the Giants, at Jacksonville, Dallas and against the AFC East second-place team, which is currently Buffalo, next season. Home games will include their AFC North opponents, the Redskins, Colts, Texans, Eagles and the second-place finisher in the AFC West (currently the Raiders). Of those opponents, as things currently stand, the Steelers would have just five games against 2019 playoff teams. And their travel schedule would be a whole lot easier. -- Lolley

• Neutral-site games in outdoor venues have become staples on the NHL schedule in recent years -- Mosaic Stadium in Regina, Saskatchewan, Notre Dame Stadium and the University of Michigan's "Big House" have played host to hockey games -- and Sam Lafferty has an idea of a place where he'd like to see an NHL game contested. "I think Beaver Stadium would be pretty cool," he said. "Penguins versus Flyers at Beaver Stadium, that'd be pretty sweet." Lafferty grew up about an hour from the Penn State campus, so his suggestion isn't a surprise. It's hardly original, either, because the idea of the Penguins playing Philadelphia there has been publicly discussed and debated for years. University officials seem receptive to the concept of having an NHL game there, but there are numerous issues -- winterizing the stadium and agreeing on how revenues would be divided, for example -- that must be addressed before it could happen. There are, of course, plenty of other possibilities for neutral-site games, and they're not limited to North America. "I'd like to go over to Europe and play in those games,"Justin Schultz said. Boston and Nashville (Prague) and Columbus and Colorado (Helsinki) will do just that next season. Regardless of where the neutral-site games take place, they give the league a way to expand its footprint, which seems to be a positive for all concerned. "Anytime you have a chance to bring the game to somewhere maybe it's not seen as often, that's a great opportunity for the game," Brandon Tanev said. -- Dave Molinari

• Don't be surprised if Montreal inquires about the availability of Juuso Riikola, who has dressed for just 12 of the Penguins' first 32 games and has gotten more work at forward than on defense. The Canadiens would like to add a left-handed defenseman and Riikola's puck-moving ability  would have an obvious appeal. It's not clear whether Jim Rutherford, who already has traded Erik Gudbranson, will be willing to further reduce his depth on defense or what he might ask for in any discussions about Riikola, but he shouldn't be shocked if "Marc Bergevin" shows up on his caller ID sometime in the near future. -- Molinari

• When Matt Cullen agreed to rejoin the Penguins' organization after retiring as a player at the end of last season, he said he wasn't sure whether he'd prefer to work in player-development or as a coach. A few months into his player-development role, however, Cullen seems content with the niche he's filling. "I enjoy it," he said. "It's been a really nice balance for me. I've been able to coach my kids (in Minnesota) and be home, then come here and stay involved in the game, stay involved with the team. You get a lot of energy coming here. It's fun to be around the guys and it's really fun to see where the team's right at now, the way they're working together. It's a real team." Cullen said his position has not involved working with players from the Penguins' farm team in Wilkes-Barre, and made it clear that he's happy with the niche into which he's been placed. "I don't know if I'm of any use," he said. "But I like it." -- Molinari

• It’s no secret the Pirates are looking for a catcher, and they have kicked the tires on Robinson Chirinos. Ben Cherington met with Chirinos' agents, MDR Sports Management, while in San Diego, and while it’s not known where they stand in terms of making a deal, Chirinos checks a lot of the boxes Cherington is looking for in a backstop. Chirinos was praised for his game planning and how he managed the Astros pitching staff last year and is terrific at blocking balls in the dirt, though his pitch framing and arm leave a lot to be desired. There is an elephant in the room with Chirinos, though, and it's his offense. He has hit well in the past, but last year he had pretty significant home/road splits. At home, he had a .915 OPS. On the road, a .673 OPS. That's significant since the Astros are being investigated for stealing signs in home games. -- Alex Stumpf in San Diego

• In the event Starling Marte is traded, expect Bryan Reynolds to move to center. Perhaps not for good, but at least in the short term. The center field free agent market is barren, and unless the Pirates get a major league center fielder in a trade, they will have to choose between Reynolds or Jason Martin, who is recovering from left shoulder surgery. Cherington is comfortable with Reynolds playing center, and it was Reynolds’ natural position while in the minors. He also likes playing the position, saying last year he gets to dive more in center, which he likes. -- Stumpf

• It really looks like Kimera Bartee will not be returning to the coaching staff next year. Cherington has encouraged all of the coaches from last year’s staff besides Rick Eckstein, Joey Cora and Justin Meccage -- all of whom are being retained for 2020 --  to explore opportunities elsewhere, and then added later in the week they are looking for a first base coach. Bartee was hired as the first base and outfield coach in October 2016. -- Stumpf

• I met with a representative of Ke’Bryan Hayes' agency while in San Diego, and they are impressed with the work he is putting in this offseason. A lot of it has been done with his father, Charlie Hayes, who played 14 years in the majors. They are working on not only hitting, but fielding, too. Sounds like he is not satisfied by being just a minor-league Gold Glover. -- Stumpf