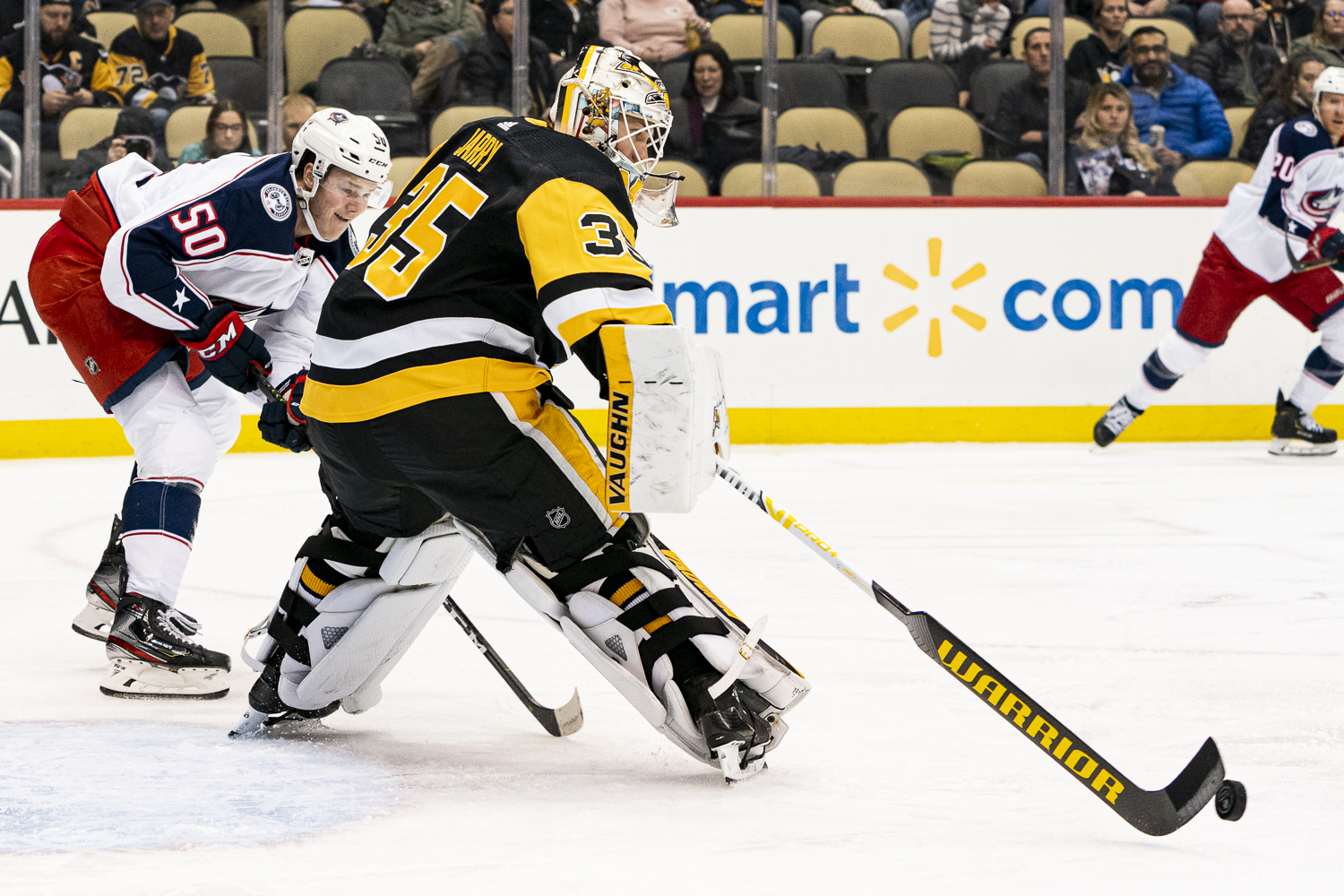 Tristan Jarry has been on an unreal run lately.

It's more than the saves, though. One of Jarry's greatest strengths, at least throughout his professional career, has been his ability to play the puck. That was on display in the Penguins' 1-0 overtime win over the Blue Jackets on Thursday.

One of the big standout moments in that area here came late in the third period. The Blue Jackets dumped the puck into the Penguins' zone, and the puck went straight to Jarry. He passed the puck down to Jared McCann at the red line, a move that led to a shot on goal and an offensive zone faceoff:

"Not only did he make some huge stops for us, but he was phenomenal playing the puck," Jack Johnson said of Jarry's game. "That stood out as well too, he made some great plays for us, made some great breakouts."

Those long passes to forwards that lead to breakouts are something he's been good at for a while now, and that last pass reminded me of this play last season in Wilkes-Barre/Scranton. Jarry bailed out his teammates after an Ethan Prow turnover led to a Hartford breakaway. After Jarry made the save, he was able to pass the puck straight to Jean-Sebastien Dea, leading to a breakaway heading the other direction:

Jarry's passing paid off in overtime, too. Not by creating breakout passes for his teammates, but by limiting the Blue Jackets' ability to make changes on the fly.

Early into the Penguins' power play from a Pierre-Luc Dubois minor penalty, the Blue Jackets cleared the puck out of their zone. Jarry came far out of his net to receive the puck and quickly send it the other way, allowing the Blue Jackets only enough time to bring Seth Jones on for David Savard, leaving two tired penalty killers -- Ryan Murray and Boone Jenner -- on the ice:

Jarry was even quicker the second time. About 30 seconds later, a blocked shot from Justin Schultz led to the puck changing possession, and Murray immediately cleared the puck out of the Blue Jackets' zone. Jarry again came far out of his net and passed the puck to Kris Letang, giving the Blue Jackets time to only make one change -- Nick Foligno for Jenner. Murray, who had been on the ice for the entire penalty kill so far, was also going for a needed change on a long shift but stopped and changed direction when he saw Jarry make the pass:

"He's huge in overtime," Johnson said of Jarry. "You clear that puck down, you get a long change, you're on a power play and those killers can't get off the ice. He really puts the other team in a jam there when he plays a puck like that."

Share
Tweet
Email
Drive to the Net: Why Tanev ‘checked all boxes’
Was this win a miracle? No, but Penguins could use a few ☕