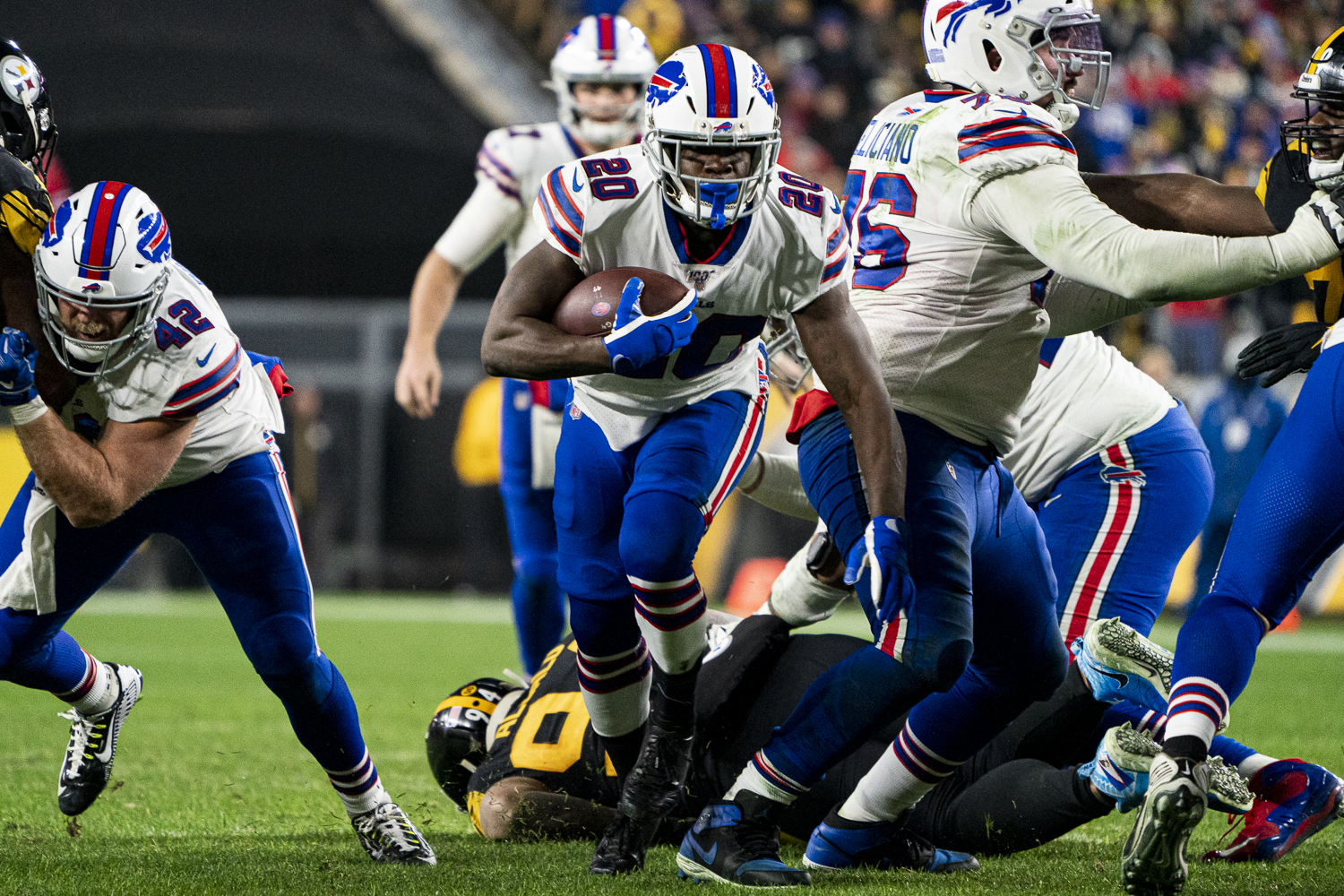 The Steelers had been hoping for an early Christmas present in the form of tightening their hold on a potential playoff spot in their final regular season home game of 2019.

But the Bills weren't in much of a giving mood.

In fact, they were downright Grinch-like.

Buffalo forced five turnovers, including four interceptions by Devlin Hodges -- two in the closing minutes in desperation mode --and took just enough advantage of the miscues to come away with a 17-10 victory here Sunday night over the Steelers.

The win pushed the Bills (10-4) into a playoff berth. They're now in, holding down no worse than the fifth seed in the AFC playoffs. The Steelers (8-6), meanwhile, still control their own fate. But they could have taken a much firmer grasp on it had they won this one.

"This one is gone," Mike Tomlin said. "We lived it. There is a scarcity in this business. You only get so many cases to state a case for yourself. We respect what transpired. We understand it. There is nothing we can do but get focused on our next opportunity."

But boy, did they let an opportunity slip away.

With the Raiders and Browns both losing to fall to 6-8 and the Titans dropping a game at home to the Texans to fall to 8-6, the Steelers could have all but assured themselves a spot in the postseason with a win. Instead, they'll have to keep fighting on down the road -- literally -- with away games at the Jets and Ravens to finish off the regular season.

After a largely ineffective first half that led to a 7-3 deficit, the Steelers took the opening drive of the second half and marched 69 yards -- five more than they had in the entire first half -- for a touchdown on an 11-yard pass from Hodges to James Conner.

And it looked like the defense just might make that lead hold after making some adjustments to slow Buffalo's running game, which had produced 75 yards in the first half.

The Steelers began playing three defensive linemen along a front with linebacker Bud Dupree, stacking outside linebacker T.J. Watt behind the line of scrimmage. Watt forced a fumble on Buffalo's first possession of the second half and the Steelers got a three-and-out on the Bills' second possession.

But Hodges was intercepted at the Buffalo 33 by Tre'Davious White -- his second of the game -- late in the third quarter, with White returning the ball to the Pittsburgh 18, where he was chased down by right tackle Matt Feiler.

The defense got the necessary stops, however, after the Bills moved the ball to the 8, as Frank Gore and Devin Singletary were stopped for losses of 10 yards on three consecutive plays to force a Steven Hauschka 36-yard, game-tying field goal.

Watt had back-to-back stops on the series, stuffing Gore for a 5-yard loss and then Singletary for a 3-yard loss to force the field goal.

At that point, it looked like the defense might be up to the challenge of keeping the Steelers on track.

But after a three-and-out by the Steelers, Buffalo got the ball back at its own 30 with just over 10 minutes to play. As Renegade played on the Jumbotron, the Bills' defensive players danced on the sideline -- almost as if they knew what was coming.

On the first play from scrimmage, Josh Allen, who had attempted mostly short, safe passes to that point, took a shot downfield to John Brown with pressure in his face. Brown went up over corner Steven Nelson, drawing an interference penalty and coming down with the ball anyway for a 40-yard gain.

"It happens. They made a play," fellow corner Joe Haden said.

They made more than one. Singletary, who gained 87 yards on 21 carries, then ripped off a 15-yard run to the Pittsburgh 15. He was stopped for no gain on first down and Tyson Alualu stripped him of the ball, but Brown recovered to give the Bills life.

Two plays later on third-and-9 from the 14, Allen found tight end Tyler Kroft in the front corner of the end zone for the go-ahead touchdown with 8 minutes remaining.

Kroft was passed off in zone coverage from linebacker Mark Barron underneath to Terrell Edmunds over the top. And Edmunds just couldn't get to the spot on the field where Allen threw the ball.

"They made a quality play," Tomlin said. "We were playing zone coverage. They had an opportunity. They got the right play call in and executed. I'd be remiss if I didn't acknowledge that they executed in that instance and others."

Down 17-10, the defense kept getting the ball back for the offense. But after twice driving into field goal range, Hodges was intercepted in the end zone, the final one coming with 6 seconds remaining.

As little as the offense did in this game, gaining just 229 yards -- including 51 on the ground on 15 carries -- it was the defense that felt it had dropped the ball in this one.

This was, as Tomlin had said all week, a 5-star matchup between two of the league's top defenses. And in this case, the Steelers defense blinked.

"I think the offense did great. They gave us the lead," Cam Heyward said. "It was 10-7 at one point. We gave up a field goal and then we have them at third-and-15. What defense wouldn’t want to be in that situation? You surrender three right there, our offense got into position for a three both times. We gave up six. I’m not looking for our offense to be a crazy offense where they have to score 50 points. As a defense, to get to where we want to get to, we’ve got to make the stops. It’s as simple as that. I think we’ve got the guys to do it, but we didn’t get the job done."

They were especially upset at allowing the Bills to rush for 130 yards on 38 carries, something that helped offset Allen throwing for just 139 yards.

"We didn’t stop the run well enough and they were able to stick to the run," Watt said. "They really didn’t have to throw the ball and be one dimensional like we want to make teams be. They ran the ball effectively. You’ve got to give them credit. They’re a gritty football team and they were able to get the yards when they mattered the most."

The first came at the end of the first quarter following a 22-yard punt from Jordan Berry that gave the Bills great field position.

Allen was sacked on first down by Watt and Vince Williams, but the Bills faced fourth-and-6 from the 36 and converted on a 10-yard pass from Allen to Brown.

Singletary then ran 14 yards on first-and-10 from the 15 dipping and darting to gash the Steelers for the first of many meaningful runs he would have in the game.

The Steelers would answer, getting a 49-yard Chris Boswell field goal to make it 7-3 and appeared to be ready to take a lead or at least cut into that lead even further after Nelson intercepted Allen off a tipped pass with 2:42 remaining in the half.

But on first-and-goal from the 10, Conner took a direct Wildcat snap and handed off to rookie receiver Diontae Johnson, who was stripped of the ball by defense end Trent Murphy. The Bills fell on the loose ball to turn the Steelers away.

"We got turnovers too. Turnovers can be the equalizer, but it still came down to two drives," Heyward said. "What was the final score, 17-10? Surrender three points. That’s the challenge for the defense. We know we play great offenses, but I think we’ve got a great defense. I don’t feel strange or out of (line) saying we should have gotten the stop. It’s as simple as that." 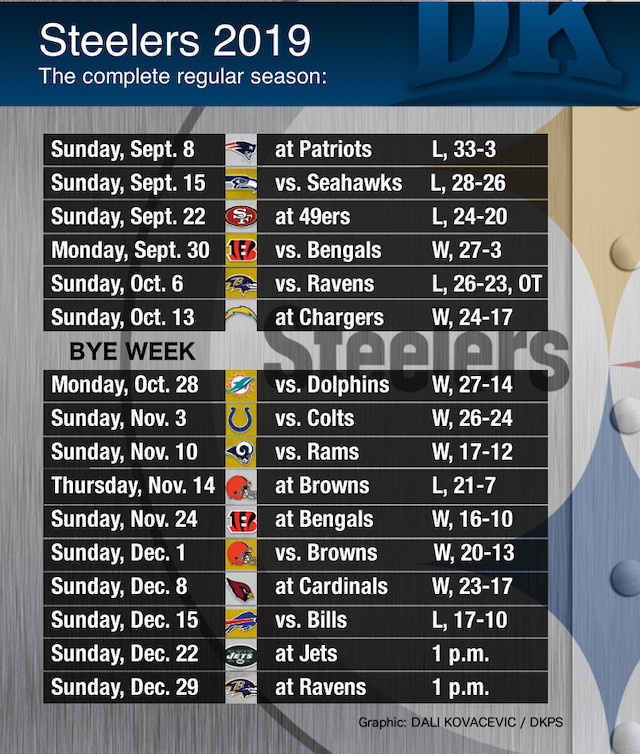