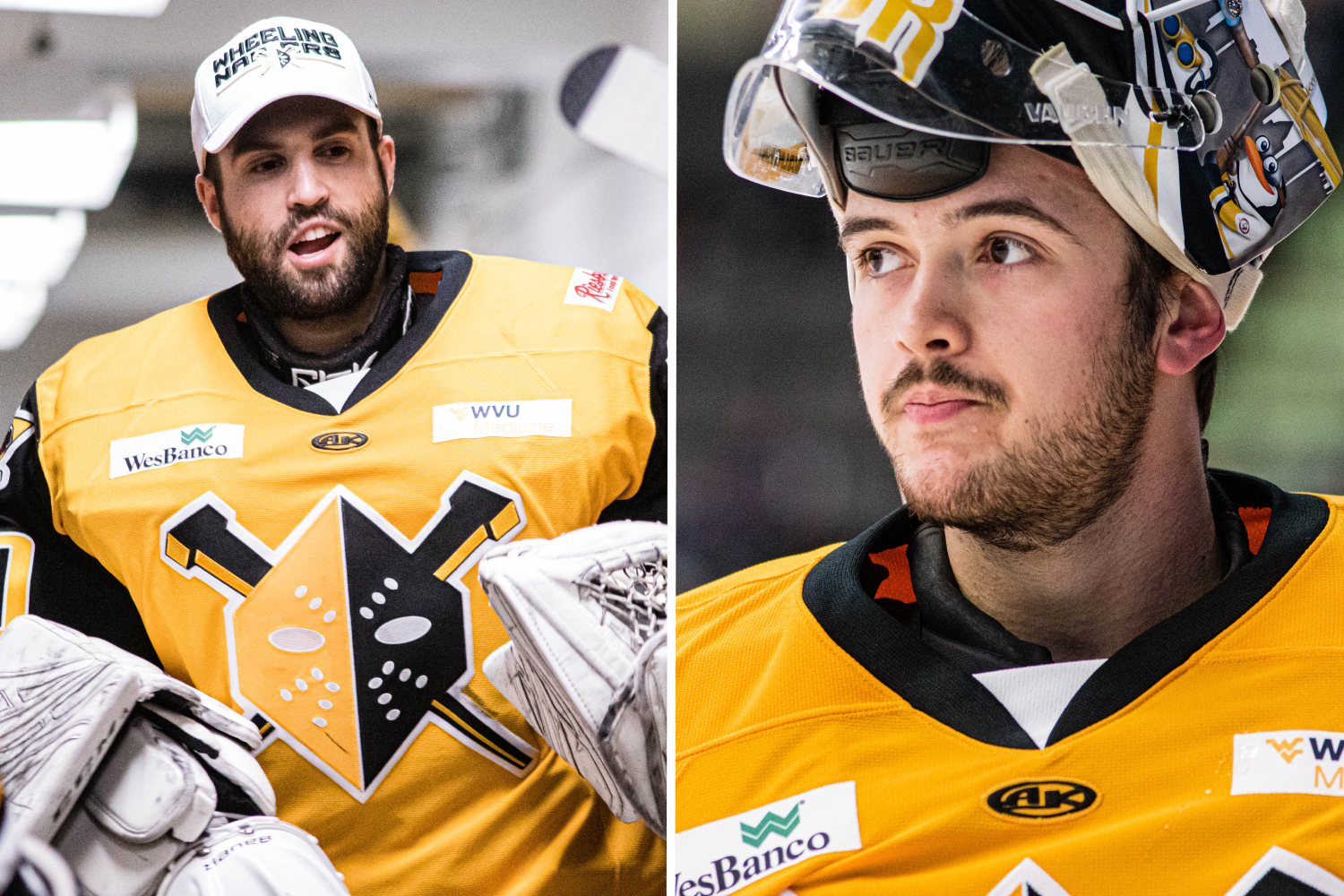 Ruby joined the Nailers last December when he was signed out of the SPHL, and was dominant in the second half of the season. He appeared in 27 total games for the Nailers last year and recorded a 2.87 goals-against average and a .911 save percentage, leading the team in both categories. So, it wasn't a surprise when Ruby was one of the first players re-signed by the Nailers this summer.

"Jordan was a key factor in us competing for a playoff spot right up until the end," said Nailers coach Mike Bavis after Ruby re-signed. "His athleticism and competitiveness flat out won us games."

For Ruby, it was nice to find some stability for his family, which includes a young son and daughter. His professional career has seen stops in five ECHL cities, two SPHL cities, and even a stint for a year in a French league.

"It was a family decision after the way things went last year for hockey, but also off the ice for the family," Ruby told me this week. "We enjoyed Wheeling, the little things. We enjoyed the apartments, we found a nice church to go to, we made things home for us. Stability and hockey are sometimes hard to have together in the same sentence," he laughed. "When you find it, you want to enjoy it and take advantage of it. It was a good setup with Wheeling, when Bavis asked if we wanted to come back it was an easy answer for us."

Something new for Ruby this year is the role of a mentor as he shares the net with D'Orio. When Ruby was with Wheeling last year, he was sharing the net with John Muse, who was 30 at the time, and Matt O'Connor, who was 26.

"There haven't been too many times that I've I'm the older goalie," Ruby said. "It's been a good start to the year. 'D'Ors' has a lot of talent, and he's still really young. Sometimes I try to teach him the odd thing, but he's teaching me things as well. We have a good relationship, he's a standup guy, a great teammate. That makes everything easier. He's having a great year so far."

When I spoke with D'Orio earlier in the season, he spoke about how helpful it was to have Ruby with him in Wheeling as he learns how to be a pro.

For Ruby, he's been impressed with just the way D'Orio carries himself at his age.

"He's a humble guy," Ruby said of D'Orio. "He doesn't really talk about himself. He knows he's under an NHL contract, but he comes in, wants to work, and just kind of keeps to himself. On the ice, simple things. If he gets scored on in practice, he says, "Nice shot!" to them. That just shows you right there, that says a lot for a goalie. He's a great teammate."

Ruby said that when it comes to their work on the ice, he doesn't act as too much of a teacher with D'Orio, since he's still learning as a goalie himself. But D'Orio will sometimes come to Ruby asking for advice, or talk to Ruby about something he saw Ruby do in a game.

"I just try to encourage and help him as much as I can," Ruby said of their relationship.

That relationship is helpful, because there isn't a full-time in-person goaltending coach in Wheeling. Goaltending development coach Andy Chiodo deals with all of the minor-league goaltenders. Chiodo watches all of D'Orio's games and speaks with D'Orio on a daily basis, since D'Orio is NHL-contracted, but he's made a few trips to Wheeling this season to work with both D'Orio and Ruby, including an extended goalie-only practice.

When Chiodo isn't in Wheeling, he's able to help D'Orio and Ruby remotely. Chiodo sends emails with goaltending drills for the two to work on before practice, the same drills that Casey DeSmith, Dustin Tokarski, and Emil Larmi are doing in Wilkes-Barre/Scranton. A few skaters join the goalies on the ice before practice, and they go through the drills themselves.

"It's a diagram, secret code only goalies understand," Ruby said of what they get from Chiodo. "These drills have a lot to do with angle shots, more game-like situations, pucks around the net, because that's where a lot of goals are scored. It helps us with our different movements and techniques."

The Nailers came just shy of clinching a playoff spot last season, being eliminated from playoff contention just before the final game of the season. Ruby was a major factor in keeping the Nailers so close to a spot up until the very end, and he's looking forward to making that push and helping Wheeling get back to the playoffs this season.

"You put so much work into the season, then you come up just shy," he said. "It leaves a little bitter taste in your mouth, but it's bittersweet too. With my play and how the season was going for me as an individual, I was feeling I was in a good spot for this year. This year, the way things are going, we've had some ups and downs but we're finding a good stride. Whatever goalie is in net, if it's D'Ors or myself, or even now Andrew D'Agostini (recently acquired to serve as backup while D'Orio is injured), we want the best for each other and we want the wins."

• Defenseman Steve Johnson signed an AHL tryout contract with the Cleveland Monsters. Tryout contracts in the AHL allow a player to play up to 25 games.

• Dec. 11: at Rapid City, 4-3 win
The Rush opened the scoring 44 seconds into the game, and Alec Butcher answered to tie the game 23 seconds later with his sixth goal of the season.

After a scoreless second period, Blake Siebenaler's sixth goal of the year gave the Nailers the lead 8:19 into the third period, but then the Rush tied the game back up 42 seconds later. Chris Brown regained the lead again two minutes later, his fourth of the year. With 2:40 remaining in regulation, the Rush tied the game back up. Nick Saracino scored the game-winner, his first goal of the season, with 2:06 left in the game.

Butcher led the team with seven shots on goal as they outshot Rapid City 41-35.

The Nailers went 0-for-2 on the power play and 4-for-4 on the penalty kill.

• Dec. 13: at Rapid City, 3-1 win
After a scoreless first period, Ryan Scarfo's eighth of the year opened the game's scoring midway through the middle frame. Saracino scored his second of the year on the power play, and then Butcher scored his seventh of the year, another power play goal, to give the Nailers a 3-0 lead at second intermission.

The Rush scored a third-period goal, but their rally attempt ended there.

Saracino's seven shots on goal led the Nailers as they outshot the Rush 31-23.

Ruby took the win again with 22 saves on 23 shots.

The Nailers went 2-for-9 on the power play and 4-for-4 on the penalty kill.

• Dec. 14: at Rapid City, 4-2 win
Chris Brown opened the scoring midway through the first period in the finale of the series with the Rush. The Rush tied the game on the power play, then Yushiroh Hirano answered 1:09 later with his seventh of the year.

Renars Krastenbergs made it 3-1 with the lone goal of the middle frame, his sixth of the year.

The Rush cut the Nailers' lead back down to one goal in the third period, but Chris Brown's empty net goal in the final second sealed the win.

Johnson led the Nailers with seven shots on goal as they outshot the Rush 39-28.

Andrew D'Agostini took the win with 26 saves on 28 shots.

The Nailers went 0-for-5 on the power play and 2-for-3 on the penalty kill.

• The Nailers’ record of 12-10-4 has them sitting in fourth place in the six-team Central Division, 11 points out of first place.

The Nailers will have Office Night on Dec. 21, so the staff recreated this scene from the show: