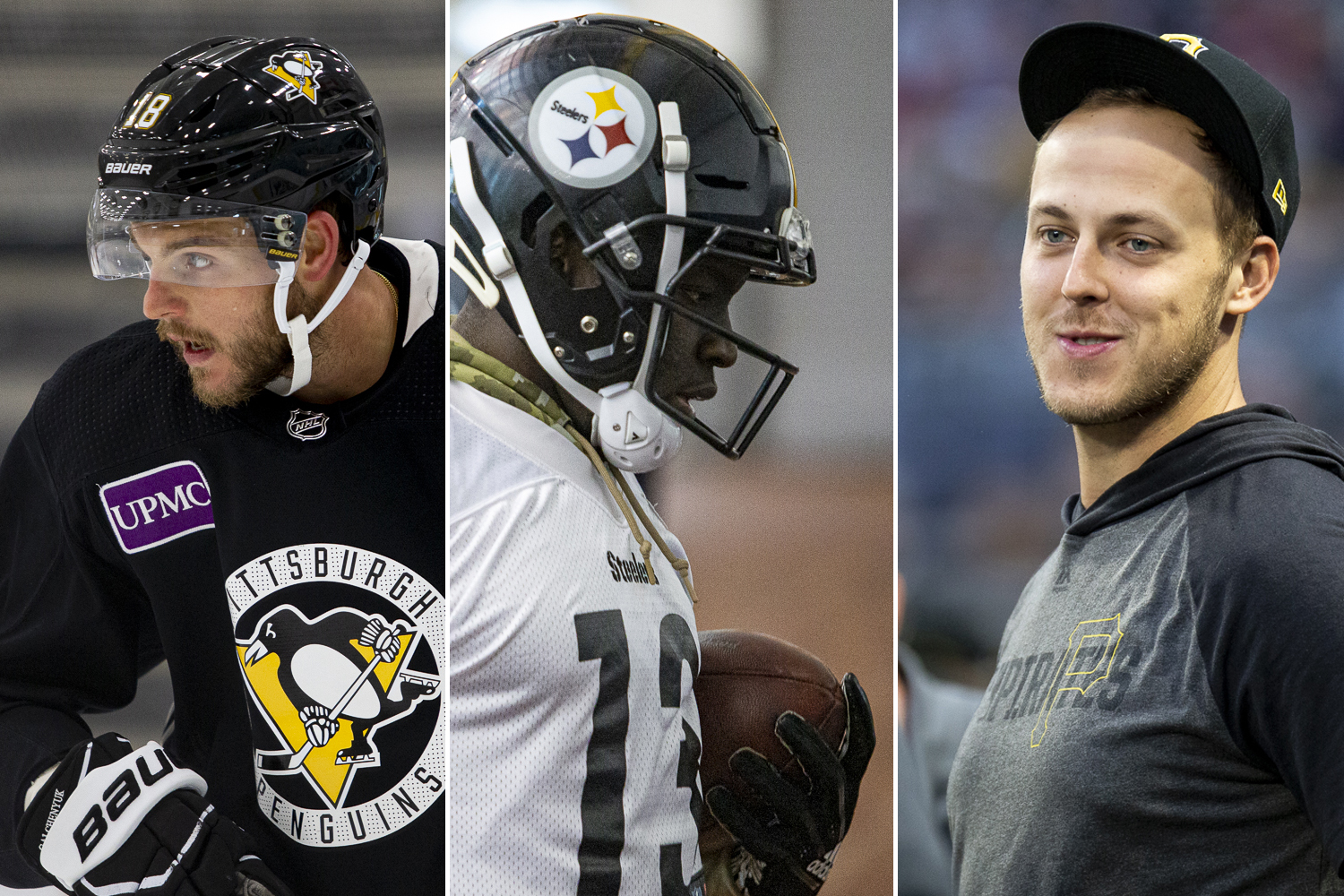 EDMONTON, Alberta -- Speculation about where Ilya Kovalchuk would sign began even before his ties to Los Angeles were formally severed Tuesday. Boston was a popular destination in those discussions. So was Dallas. Columbus got mentioned, too, Same with the New York Islanders.

And, to the surprise of almost no one -- especially Jim Rutherford -- the Penguins also were named as a potential landing spot for Kovalchuk in at least one report.

"We get thrown in on every deal," Rutherford said, laughing.

The trouble this time, he said, is that the story was detached from reality, because the Penguins have not shown any interest in adding Kovalchuk to their payroll.

Rutherford, by the way, declined to say if the Penguins made a serious bid to acquire another high-profile forward who was on the market recently, Taylor Hall. He ended up being dealt from New Jersey to Arizona.

• Here's something to watch in the coming days and weeks: Alex Galchenyuk obviously has not produced to expectations this season -- he has just two goals in 25 games -- but it turns out that he struggled to score early in 2018-19, after the Coyotes had acquired him from Montreal. However, Galchenyuk's offensive output began to rise after Arizona's games against the Canadiens, with whom he spent his first six seasons in the NHL, were in the rear-view mirror. He had three goals in 24 games before the Coyotes played Montreal for the first time on Dec. 20, 2018, then scored five in the 16 games that followed, through their final meeting with the Canadiens. Once the season series concluded, Galchenyuk put up 11 goals in the 32 games that remained. Coincidence? Maybe. So far, Galchenyuk hasn't scored in the four games since Montreal's 4-1 victory at PPG Paints Arena Dec. 10, but perhaps he'll get into an offensive groove after the Penguins make their lone visit of the season to the Bell Centre Jan. 4. If not -- and if there really is a connection between his productivity and games against his original NHL club, he might not get going until after the Penguins' season series with the Canadiens ends Feb. 14. -- Molinari

• Although the Penguins figure to have salary-cap concerns for as long as they're contenders, Rutherford probably saved a lot of money -- and stress -- by getting Jake Guentzel and Bryan Rust signed to their current deals. Rust's deal runs for two seasons after this one and carries a cap hit of $3.5 million; Guentzel's cap hit is $6 million per season on a contract that runs through 2023-24. "They're both key guys to our team," Rutherford said. "Having them locked up for a few years is good. They're guys who have won. They care, and they want to win again. ... They're two key guys to our present and future." -- Molinari

• While the Penguins' sellout streak at PPG Paints Arena has reached 594, they might not be quite the attraction on the road that they have been for most of the past decade or so: Seven of their 14 away games to date have attracted less-than-capacity crowds, including 18,412 fans who turned out for their 4-1 victory in Calgary Tuesday. However, the Penguins' gate appeal outside of western Pennsylvania should be enhanced when Sidney Crosby, out since mid-November while recovering from sports hernia surgery, gets back in uniform. -- Molinari

• In his past eight games, James Washington has 29 receptions for 533 yards and three touchdowns. I'm no mathematician, but that works out to more than 1,000 receiving yards over the course of a 16-game season. And Washington has done that with both Mason Rudolph and Devlin Hodges at quarterback. "He’s a great player and he’s showing everybody that hasn’t seen him for the past four years in college that he’s dependable and he’s the older guy now, a year and a half, two years in as far as pre-snap motions and getting guys lined up," Rudolph told me of his college teammate. "We’ve had a revolving door with new receivers. He’s been the guy who as we break the huddle, if there’s confusion, he’s getting guys lined up, splits, inversions and routes." That's a good sign for Washington heading into Year 3 next season, especially when Ben Roethlisberger returns. Some were questioning Washington after his rookie season and a slow start to this year. But he's been outstanding in the second half. And he's produced despite getting just 42 targets in those eight games. "The NFL isn’t always a developmental league," Rudolph said. "You’ve just got to keep believing in guys and he keeps dealing with adversity like a lot of people do early in their career. He kept working, studying the playbook. He’s been able to play a lot of spots, inside, outside. It’s been good." -- Dale Lolley at Rooney Complex

• David DeCastro doesn't get upset often. He was, after all, the winner of The Chief Award last season, given by the media to the Steelers player who best embodies Art Rooney Sr.'s cooperation with the media. But when I asked DeCastro this week if the line was ticked off after last week's 17-10 loss to the Bills, he got, well, ticked off at me. "What, did you think it was all our fault?" DeCastro asked. That answer, along with offensive coordinator Randy Fichtner's mentioning Hodges being spooked by the Bills' blitzes leads me to believe even more than I did before that the inadequacies for the offense in that game were more on Hodges than anything else. In fact, rewatching the All-22 tape, there were receivers open if Hodges had taken the time to go through his progressions. DeCastro, by the way, wasn't saying the line played well in that game. The Bills' zone-blitz scheme, designed to take away the short quick passes -- which is why Dick LeBeau developed it in the first place -- caused confusion up front. Especially, apparently, for a quarterback making his fourth career start. -- Lolley

• Jets quarterback Sam Darnold missed four games because of mononucleosis earlier this season. Steelers practice squad cornerback Alexander Myres can relate. He was diagnosed with mono on the second day of training camp. "It was awful," Myres told me this week. "I lost 20 pounds. I'd go out and watch practice and the sun would make me feel worse. I couldn't do anything. I didn't have any energy." The Steelers were excited about the rookie corner out of Houston, who led all NCAA defensive backs in special teams tackles last season. So even though they eventually released Myres, they brought him back on their practice squad later once he had finally gotten over the debilitating illness. That took nearly two months. "I'm just glad and thankful they brought me back," Myres told me. "I try to go out every day and give it my all." -- Lolley

• Benny Snell had gotten at least 16 carries in each of the Steelers' previous three games before playing only two snaps against the Bills. With James Conner back in the fold, it was a bit of a given that Snell's workload would be reduced. But two snaps? And two carries? "Not really surprised," Snell told me. "It was how the game played out, how they wanted to run formations, the personnel. We only ran the ball 14, 15 times. It happens." The Steelers seem intent to not allow it to happen again. And the coaching staff is telling Snell, a rookie out of Kentucky, that he still has a role moving forward. "If they need me for a short-down guy and they’ve got me in the top running personnel if we go heavy, I-formation stuff, the role is still the same," Snell said. "They haven’t told me anything different." -- Lolley

• If there was any lingering doubt, Jameson Taillon will not pitch in the majors in 2020. He was on the injured list for several months before eventually getting Tommy John surgery in August, but that's not the reason why he is missing the 2020 season. Tommy John revisions take 16-18 months to heal, so even if he had the surgery the day he went on the injured list last year, the odds of him pitching in 2020 were still not great. -- Alex Stumpf

• There is no timetable on when the rest of the coaching staff will be filled out, but they are close to finishing. They still have to find at least an assistant hitting and pitching coach and a first base coach. David Eckstein is having a say in who will be his assistant coach. While not officially confirmed, all signs point to new pitching coach Oscar Marin getting the same say in his assistant. --Stumpf

• Not to say he will get one of those major league coaching spots, but Omar Moreno is interested in an instructional role within the organization. He filled in as first base coach at times last year and made periodic stops in the big league clubhouse. He also was a key figure in Pablo Reyes' development. And it's worth mentioning former first base coach Kimera Bartee also coached the outfield, which Moreno could do as well. -- Stumpf