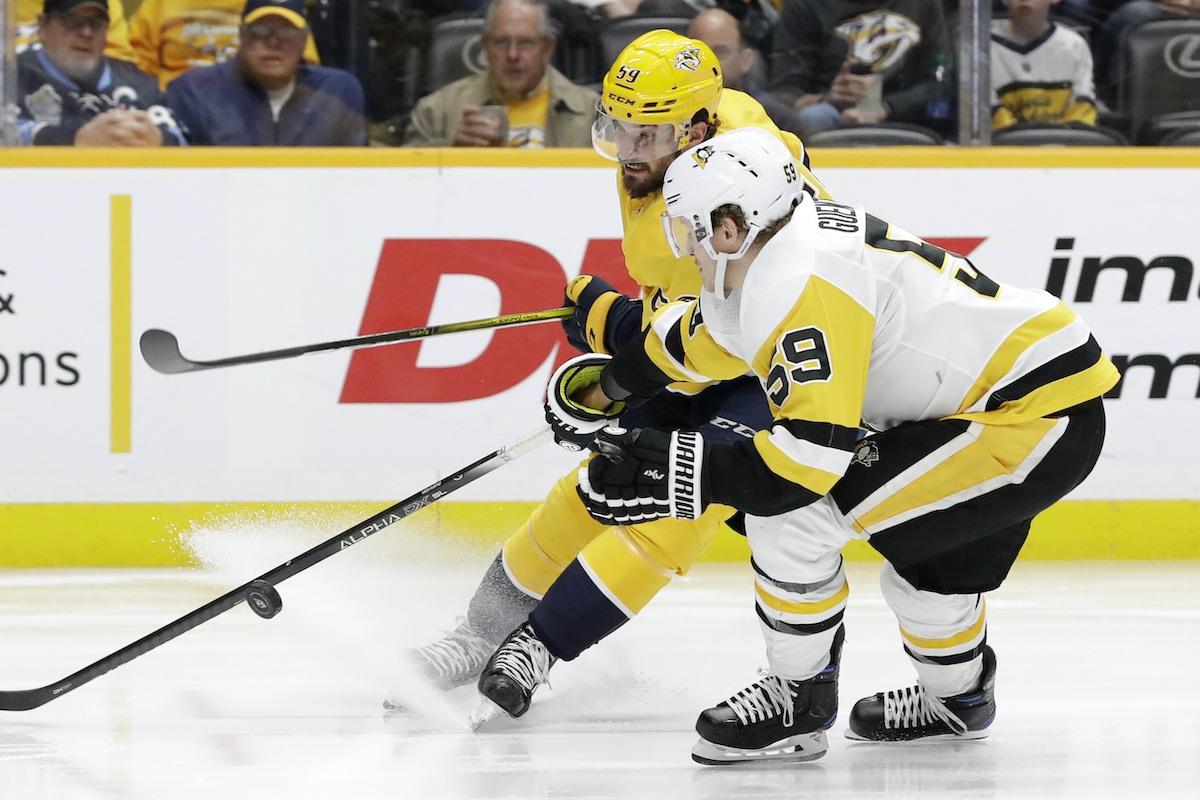 NASHVILLE, Tenn. -- "They defend hard, but there's more to what they're doing. They'd done a lot of winning, that franchise. That's the culture over there."

That was Peter Laviolette, Friday morning at Bridgestone Arena.

By nightfall, he'd be an unwitting -- not to mention unwilling -- prophet.

"When you're having success doing things, it makes it a lot easier to stay with it, you know?" Jack Johnson was telling me afterward. "But I mean, from Day 1 ... or from the second game, I should say ..."

The stinker against the Sabres in the opener, of course.

"From the second game on, I think that we've defended consistently," he continued. "And I think every guy on the team has bought into it. It's cool to see. When you got everyone pulling in the same direction and believing the same thing, it's a dangerous team."

"We've seen the results," Marcus Pettersson essentially echoed from the next stall. "When we play a team game, we've shown we can beat any team in the league. I think we've embraced the situation we're in, and we're winning games the right way. We know where it's starting."

Yep. That's it. And if you ask me, all the rest is trim on the tree.

I mean, here we are, nearly halfway through the NHL schedule, and this remarkably resilient collection of NHL/AHL quiltpatches, still missing a quarter of the roster that includes their iconic captain, are now 8-2 in December. They're 22-11-4 overall, sixth-best in the NHL. They've got a plus-28 goal differential that's third-best.

But for however long all that felt surreal, it really shouldn't anymore. Not when this same collection also is allowing 2.67 goals per game, sixth-fewest in the league, and 29.0 shots per game, second-fewest. In that circumstance, it doesn't matter whether it's Bryan Rust scoring his 14th goal, as he did in this game, or whether it's Dominik Simon, Alex Galchenyuk, Teddy Blueger and Juuso Riikola, as also occurred. The defending stays the same, game after game, shift after shift.

"You never stop," Jared McCann would say. "Everyone's got to do their part."

Not just Tristan Jarry. And I dare say that's a point that needs to be underscored. Excellent as Jarry's been with his superlative .939 save percentage, this has been more about the forwards tracking back and covering on pinches, the defensemen taking smarter risks and making smarter breakouts and, in general, the big bundles that box opponents out of the high-danger scoring areas.

The guy with the best view sees and appreciates it, too:

In this one, for example, the Predators had 50 shot attempts, which might explain why Laviolette downplayed the score -- "They were opportunistic," he observed of the Penguins converting 5 of 25 shots -- but what's critical is that only nine of those 50 shot attempts qualified as high-danger scoring chances. And both of Nashville's goals originated with perimeter flicks that were tipped.

I joked with Mike Sullivan that maybe he's reached the stage where he doesn't even need to preach the approach anymore. He almost laughed, too.

"The coaching staff is certainly emphasizing it," he began with a grin. "Just to make sure that we're crystal clear on that."

"But I think the team has really provided itself with a lot of hard evidence that, if we play the game a certain way, and we manage the puck, and we defend hard, and we're defined as a group by our collective effort ... I think we're hard to play against. And we have enough difference makers in the lineup -- even under the circumstances we're in right now -- that we give ourselves a chance to win."

He paused a moment, then continued, as I guessed he would. If this isn't his favorite subject, I can't imagine what is.

"You know, when we get timely saves, like we're getting from our goaltenders, and you defend hard, you're always going to give yourself an opportunity to win games. And that's what the guys have done. I give our players a lot of credit. They're committed to playing defense."

The players get credit. The head coach should, too. This was his system in 2016 and 2017, and it's back with a bite unseen since then. Same for Jim Rutherford for reassembling the right pieces.

The partial-strength Penguins are back to being among the NHL's best and beating the NHL's best. To Pettersson's point about beating "any team in the league:" December began by taking down the Stanley Cup champion Blues, it carried across Western Canada and the sizzling Flames, and it rolled right through the five-day Christmas break that ended here. The Predators had been 4-0-1 in their previous five, had a fully healthy roster, and might well have been, as Sullivan called them beforehand "the hottest team in the league."

But after Nashville tied, 1-1, on a redirect/rebound by Craig Smith, the Penguins' defending forged ahead, a few chances came at the far end, followed by the resurrection of Pekka Rinne's personal demons upon seeing a Pittsburgh sweater, in that he'd get chased by three goals on six shots:

The final two up there by Galchenyuk and Blueger were pardonable point-blank rebounds, but the Simon softy from Kentucky made for a lousy start.

Rinne was replaced by Juuso Saros, and not much changed:

Not much ever changes with this group. It's got a steady heartbeat, built off what they do best and, to paraphrase Pettersson yet again, what they "embrace."

Imagine that when embracing all these pending returns. One in particular.

"Everyone’s stepping up a little bit and playing a better game, doing the little things and playing that much harder," Rust said when asked about Crosby's absence. "Knowing he’s out, when we come back, I hope we can maintain that level. With the addition of him, it just makes our team unbelievably strong."