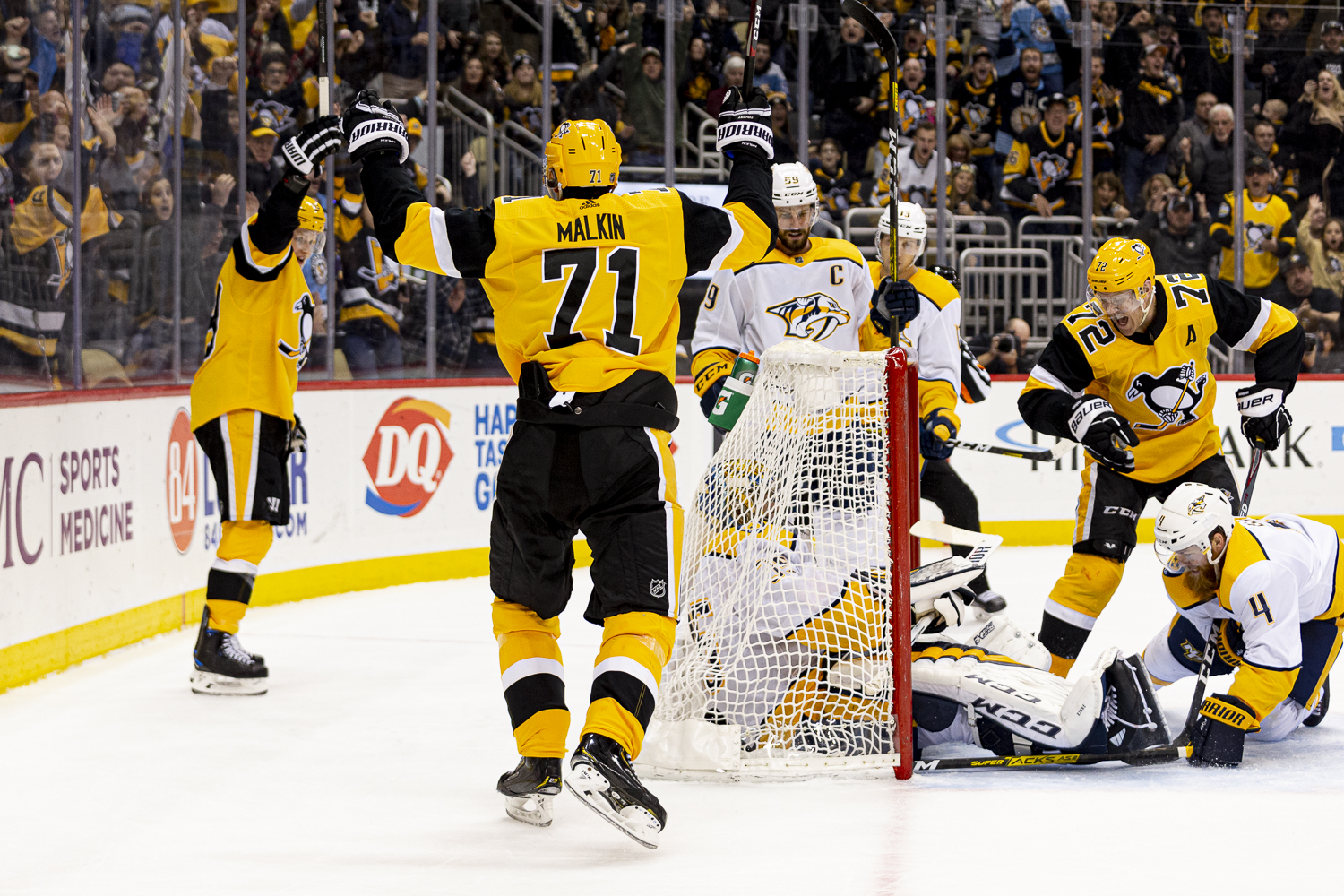 Games like this are why coaches purchase antacids by the six-pack.

Assuming they can't get them by the case.

Now, you might not think that Mike Sullivan had much reason to fear for the well-being of his central nervous system during the early stages of the Penguins' 6-4 victory against Nashville at PPG Paints Arena Saturday night.

Not when Bryan Rust scored a goal 32 seconds after the opening faceoff:

And when Kris Letang drove Nashville goalie Juuse Saros from the game with a power-play goal at 9:04 of the first period to make it 3-0, one might have suspected that Sullivan's most pressing concern would be deciding where to go for dinner after watching his team claim a couple of low-stress points:

While such thinking seems perfectly reasonable, Sullivan has been around this game long enough to know that no early lead -- no matter how large -- is guaranteed to hold up over 60 minutes.

That momentum can be fickle and, once lost, can be almost impossible to recapture.

And if he hadn't been aware of all that before, what Sullivan witnessed against the Predators -- when the Penguins failed to protect a pair of three-goal leads and looked to be in mortal peril of not taking even a single point out of the game -- surely would have made the point.

"It's always a dangerous lead, I think, when you get up three goals that early in the game, because there's so much hockey left," Sullivan said. "As much as you, as a coaching staff, we are trying to preach vigilance and staying on your toes and trying to work for the next goal, it's almost like you're fighting human nature that your team doesn't exhale. And when that happens, you get on your heels."

Which is where the Penguins found themselves -- actually, they were closer to being on their backs -- with the score tied, 4-4, and a minute and a half left in regulation. But as the Predators were pressing for a go-ahead goal, Nashville's Austin Watson was assessed a minor for goaltender interference at 18:34 of the third period.

Twenty-three seconds later, Jake Guentzel stuffed a shot inside the right post for what proved to be the game-winner:

Oh, it didn't become official until a video review confirmed that Guentzel's shot had made it all the way across the goal line, but the Penguins were confident about what replay would show long before the verdict was announced publicly. Even if they weren't certain at the time whether Guentzel or Patric Hornqvist, who nudged the puck past goalie Pekka Rinne after Guentzel had, would get credit for it.

"When (Hornqvist) celebrated, you could tell it was in, for sure," Guentzel said. "I couldn't tell if it was his or mine or what happened."

His goal was the Penguins' third of the game on the power play, a season-high. Heck, it was just the fourth time all season they scored more than one man-advantage goal in a game, and the first time they'd done it since Nov. 27 against Vancouver.

An underachieving power play has cost the Penguins points several times in 2019-20, but their work with the extra man -- they scored on all but one of their four chances -- shaped the outcome against Nashville more than any other single factor.

"I thought they did a great job," Sullivan said. "Obviously, they're the difference in the game."

No question, but the Penguins took control of the game with a pair of even-strength goals in the first 65 seconds of play, well before Letang scored their first man-advantage goal.

At that point, the Penguins' 5-2 victory in Nashville 24 hours earlier must have seemed like the good old days for the Predators, whose performance for much of the first period suggested they had been introduced to the rudiments of the sport just a few hours before the opening faceoff.

"We needed to play better at the start of the game," Nashville coach Peter Laviolette said.

The Predators proved they could do that for much of the second and third periods, when their 38-19 advantage in shots was a reasonable reflection of how they dominated play. Rinne, who had been pulled from the game in Nashville Friday, played well after replacing Saros and the Predators swarmed around the Penguins' zone during the final half of the game.

"We exhaled a little bit and we didn't play the right way," Hornqvist said. "They have a lot of good players on the other side. When they got a little bit of confidence and momentum, they were the better team. Same as we were in the first 30 minutes.

"We got away from it a little bit in half of the second and the third. But we came back and won. That's all that matters."

While Matt Murray hardly thrust himself into the Vezina Trophy conversation with his performance Saturday, he did turn aside 44 of 48 Nashville shots, including 20 of 21 in the final period.

"I thought Matt was really good in the third," Sullivan said.

Although there's no way a similar charge against most of Murray's teammates could be made to stick, they managed to fend off Nashville just long enough for Guentzel to generate the goal that provided their victory.

"It wasn't the prettiest win," Sullivan said. "We found a way to win. I liked our resilience and our resolve. We didn't crumble. We kept competing."

Those have become standard-issue qualities for the Penguins this season. Indeed, they have a lot more experience at coping with adversity than they do protecting big early leads, which is why Sullivan wants his players to grasp how they nearly allowed this victory to get away.

"So we've got to make sure that we hold one another more accountable (for) continuing to play and stay focused on the details of our game. If we do that, I think we'll do a better job of controlling momentum."

And the coach's stomach acid, too.