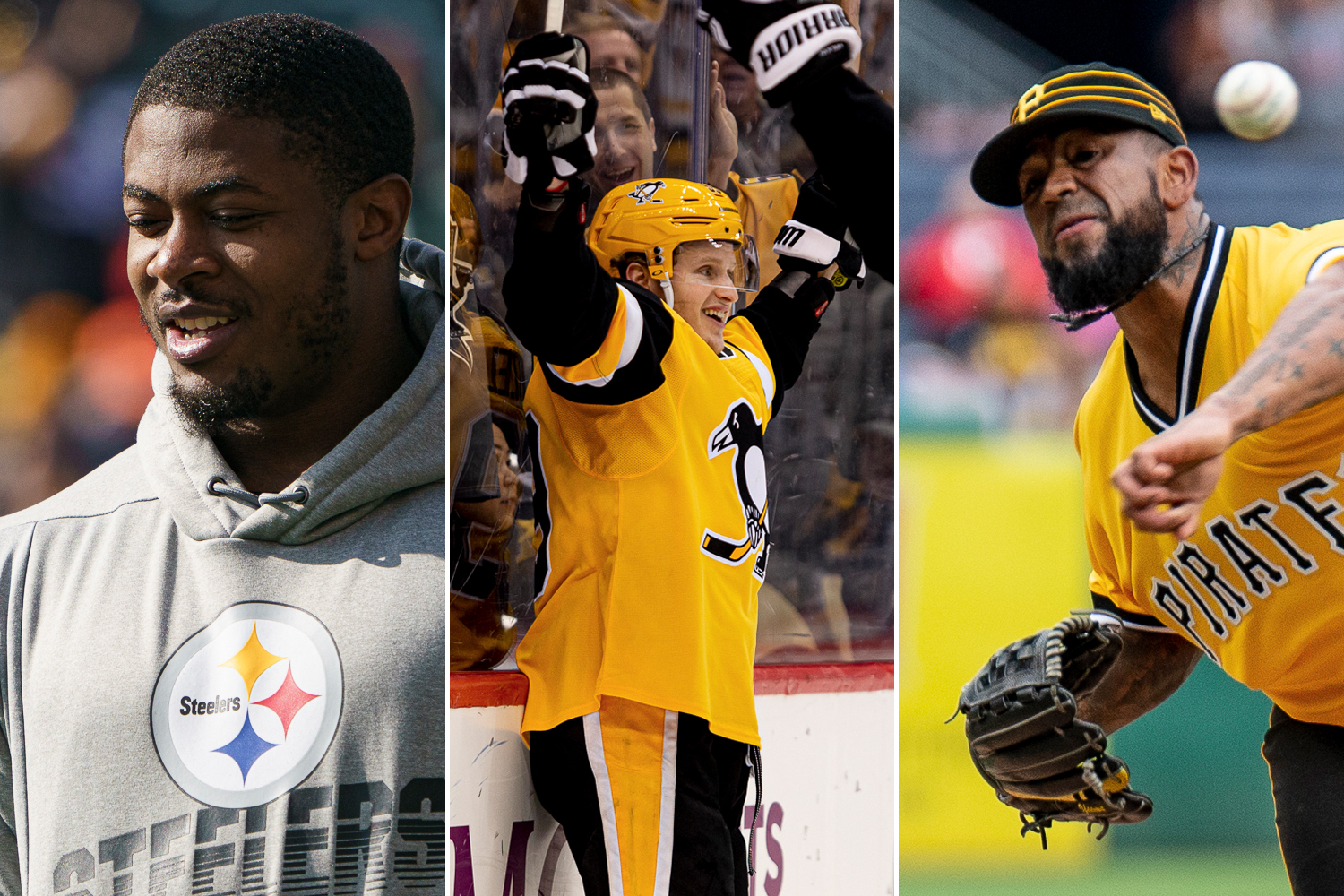 When the Steelers selected Artie Burns with the 25th pick in the 2016 draft, the hope was that the young cornerback would be a foundational player for them for years to come. After all, he was the first cornerback the team had selected in the first round since Chad Scott 24th nearly 20 years earlier in 1997.

But Monday, there was Burns in the Steelers' locker room, packing all of his things into trash bags to carry out of the Rooney Complex one last time. The writing has been on the wall since the Steelers didn't pick up his fifth-year option last Spring that this would be Burns' final season here, but the reality of it became clear Monday as he worked to gather his stuff while his teammates gathered as a group a few feet away, playing games and talking around the unused pool table that is a centerpiece in the room.

"It is what it is. I’m still young. I’ve made a lot of growth," the 25-year-old corner told me earlier this week. "I know that a team out there is going to get a special player."

Burns started the final nine games of his rookie season, picking off the Ravens' Joe Flacco in his first career start while helping the Steelers reach the AFC Championship.

He then started all 16 games in 2017, breaking up 13 passes and intercepting one as the Steelers went 13-3 only to lose to the Jaguars in the Divisional Round of the playoffs.

Things turned bad in 2018, however, as he struggled early in the season, eventually losing his starting job to Coty Sensabaugh. He moved back into the lineup for a Dec. 16 meeting with the Patriots, but was quickly pulled after blowing an assignment in coverage that gave the Patriots their only touchdown in a 17-10 Steelers' victory.

While Sensabaugh left in free agency in 2019, Burns' struggles prompted the Steelers to sign Steven Nelson in free agency and draft Justin Layne in the third round.

Burns appeared in 10 games, mostly on special teams, though he did make one start in place of an injured Nelson in a win over the Chargers. He was inactive for the final six games of the season.

What will Burns be searching for in a new team?

Burns might be better suited for a team that primarily plays man-to-man defense, though the Steelers are doing more of that than ever before. But they also switch in and out of zone and man coverage quite a bit, and that seemed to be where Burns struggled most, with those changes.

"It doesn’t really matter now, but I got better in man and zone," Burns said. "There’s a team out there looking for me."

The Steelers hope so, as well. Burns will turn 25 in May. He's still a very young player. And if he receives a decent contract offer from another team, it could help the Steelers with a compensatory pick in 2021.

In the meantime, Burns made $9.5 million with the Steelers over four seasons, recording four interceptions, all of which came in his first two seasons.

They also helped him grow up. Burns' father is in prison for cocaine trafficking and his mother died of a heart attack while he was still in college at the University of Miami. He took over guardianship of two younger brothers at that time, something that certainly could have affected his on-field play at times.

"They helped me and my family through a tough time that I was going through," Burns said. "I'll always appreciate that. You live and learn and grow. I’ll be back next year."

It will just be somewhere else.

• One of the more interesting situations to watch for the Steelers this offseason will be what the team does with Vance McDonald. The tight end has been injury-plagued throughout his career and the Steelers hold an option on him for 2020 at $5.5 million and again in 2021 at the same salary. That makes his cap hit in 2020 $7.127 million. But if the Steelers don't pick up the option, it saves them around $5.6 million against cap. Of course, with backup Nick Vannett also scheduled to be a free agent, that would leave the Steelers thin at the position. But if McDonald signs elsewhere, the Steelers would potentially get a compensatory pick for him in 2021 since they would be not exercising his option instead of releasing him. The Steelers also could potentially decline the option and allow McDonald to become a free agent, then sign him back at a lower cost. -- Lolley

• Mike Hilton wanted a new contract in 2019 but that didn't happen for the exclusive rights free agent. Now, he'll be a restricted free agent and figures to get a nice raise on a one-year deal if the Steelers tender him an offer. Hilton, the team's nickel cornerback, made $645,000 in 2019. If the Steelers tender him an offer sheet as a restricted free agent, his salary will go up considerably. The Steelers would likely put a second-round tender on him, meaning if someone else chooses to sign Hilton, the team would receive a second-round draft pick as compensation. But that would increase his salary to more than $3 million in 2020. "I absolutely want to be here next season," Hilton told me. But given the Steelers' lack of cap space, it's doubtful the team can sign him to a long-term deal, even though the 25-year-old corner played a career-high 691 snaps, recording 65 tackles, 1.5 sacks and an interception. -- Lolley

• The NHL season is three months old, and general managers generally have a pretty good sense of their individual players and what the team's most pressing personnel needs are by this time. But most clubs haven't lost almost every significant guy on their payroll for an extended stretch the way the Penguins have during the first half of the 2019-20 season. The hard truth is, they have had everyone healthy for just part of one game (No. 2 against Edmonton) in their first 40 and with Jake Guentzel virtually certain to miss at least the rest of the regular season while recovering from shoulder surgery, that isn't likely to change before next season. "You can't get a total assessment of your team," Jim Rutherford said. "But we've certainly gotten enough to assess the fact that it's a team that can play through adversity and a team that has players who can step up at times when the team needs them to." That doesn't mean Rutherford, one of the game's most aggressive traders, has ruled out making a trade or two to plug some of the holes those injuries -- particularly Guentzel's -- have created in his lineup. "It's too early to tell," he said. "I'm going to need more time to think about this." — Dave Molinari

• John Marino appeared in his 38th game of the season when San Jose visited PPG Paints Arena Thursday evening. That's five more than he played in last season at Harvard, which means his durability is sure to be tested over the second half of the NHL season. "We just finished up (the equivalent of) a whole season in a couple of months," he said. Marino, though is optimistic that he'll be able to hold up under the grind of the pro schedule, in part because "there are resources here -- recovery-wise, nutrition-wise -- that they help you a lot more (than in college)." While Marino has been excellent for the Penguins at both ends of the ice from the earliest days of training camp, it won't be easy for him to secure a spot on this season's all-rookie team because of the exceptional class of first-year defensemen in the league. The headliner is Cale Makar, who actually joined the Avalanche late last season, but it also includes the likes of Quinn Hughes (Vancouver) and Adam Fox (New York Rangers). All of them have been performing and producing at levels rarely associated with rookies at their position. -- Molinari

• Rick Tocchet was well aware of the Penguins' injury miseries when he brought Arizona to town last month, but he didn't necessarily feel sorry for them. "We went through it a year ago, and I never got any sympathy flowers from Jim Rutherford or Mike Sullivan," he said. And that was before the Penguins beat his team, 2-0. Don't get the wrong idea, though. Tocchet was joking, and made it clear that his emotional ties to the Penguins, with whom he won one Stanley Cup as a player and two more as an assistant coach, remain strong. "If there's a team I want to see do well, it's Pittsburgh," he said. "The Coyotes obviously are No. 1, but you always want to see Pittsburgh do really well." And make no mistake, he does keep an eye on how his old club is doing, whenever it's possible and practical. "Our video coach (Steve Peters) busts my balls a lot because at 5 o'clock -- we have TVs in the room -- he goes, 'All right, here comes Pittsburgh,'" Tocchet said. "Unless it's a division game (being broadcast). Division games take precedent. But then, it's Pittsburgh." -- Molinari

• Despite increasing pressure from the public and some politicians, Major League Baseball is not backing down from their proposal to cut 42 minor league teams at the end of the 2020 season. If that happens, the Bristol Pirates, a rookie-ball affiliate, would be on the chopping block. MLB insists the goal of the negotiations are to improve team facilities and pay for minor-leaguers, and while the Bristol Pirates are guilty of the former, the latter is a problem MLB created with 2018's "Save America's Pastime Act," which labeled players as seasonal employees and exempt them from minimum wage laws. -- Alex Stumpf

• The Pirates will not be holding a mini-camp this year. Most teams do not do mini-camps, and while Ben Cherington considered holding one, he ultimately opted against it. The camp was always voluntary, as per the player's union and league's labor agreement, but it gave some players a chance to get ready for spring training and the team could check in on their rehabbing players. The Pirates had held a mini-camp every year since 2001. -- Stumpf

• For anyone who got a Pirates wall calendar for the holidays, you may have been surprised with some of the players they chose to promote. The Lang Company calendar features the recently non-tendered Elias Diaz in March and the incarcerated Felipe Vazquez in December. The Pirates did not have any say in which players will be featured. They did not even get an opportunity to approve Lang's choices. Instead, it went through MLB Properties. Lang made its decision while both players were still under contract with the team and purchased the rights to the photos early in 2019, well before the arrest of Vazquez. -- Stumpf