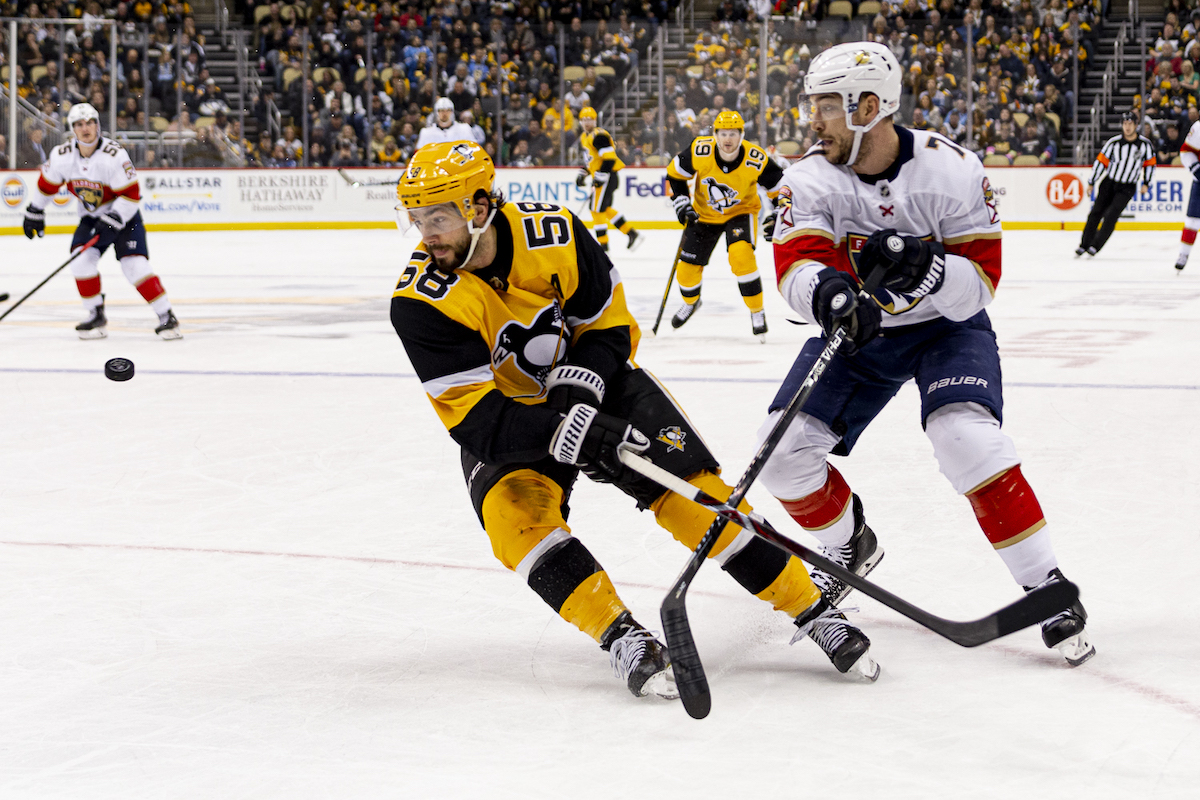 Kris Letang needs to be better.

There. Lets' try the positive approach this time.

Candidly, I'm not sure what approach could conceivably work for Mike Sullivan and the Penguins, this following three more hours of follies for the franchise's most mercurial player, a 4-1 flop against the Panthers on this Sunday evening at PPG Paints Arena in which Letang was principally responsible for Florida's first two goals ... and did damage even beyond that.

I mean, what I'm about to detail won't even include the following …

... and on any other day, each of those in isolation might merit breakdown-of-the-breakdown treatment.

But again, this one's positive. Not like the other night, when Letang's lapses cost the Penguins a loss to the Sharks, and I went decidedly the other direction.

OK, let's start with this: He cares. He didn't achieve everything he has in life, on and off the ice, without having the heart of a champion, the fire and drive to match. He's always had that, undoubtedly always will.

Next: He knows when he messes up. He hates being asked about it, prideful as ever, but he's aware.

After the San Jose game, he was out of the locker room in a raging hurry before we reporter types could enter. After this one, the room opened a minute or so earlier, and I asked Letang as he was again heading for the exit. He paused to take my questions, albeit with visible reluctance, and our exchange lasted all of 24 seconds.

Does he feel, I asked, he's on the same page as the rest of the team?

Can he explain the sudden spate of turnovers in the past week?

"I think we played better in the second," he replied, referencing the second period of this game. "Some mistakes, I made some mistakes ... it is what it is. A bad one."

I'm grateful he stopped. I mean that.

Rather, it's about Letang needing to collect all of those aforementioned positives and apply those into a healthy second phase of an already exceptional NHL career.

This was Florida's first goal, 2:28 after the opening faceoff, by Frank Vatrano:

If one goes full Zapruder on this one, the initial frames strongly support that Letang had a step on Vatrano at center red, as well as sufficient momentum toward the same trajectory. And yet, Vatrano not only beats him in a straight line but also cuts to the inside and, to boot, has ample time to bury his own rebound behind Tristan Jarry.

Is Vatrano that fast?

Yeah, he's got wheels, but there was a similar straight-line backtrack race between Vatrano and Evgeni Malkin in the third period, which Malkin won decisively by flat-out skating hard, then muscling off the smaller man.

Did Letang just get lazy or lackadaisical?

This is where it gets layered. Because, as I've already laid out, he's not wired that way. He just isn't. But I also laid out that he's prideful, often to a fault, and I really think that's what happened here.

He's been in that same setting up there countless times, and he's always been able to simply glide back and cover for any error. That actually became his claim to fame in his earliest days in Pittsburgh, including the Stanley Cup Finals against the Red Wings. He had the endurance of Sergei Zubov, the speed of Zarley Zalapski, and he could take risks all over the rink without breaking a sweat.

I can't be certain that's the case anymore. He'll turn 33 in April. And if he defies Father Time, pending further research, I'm betting he'll be among the first in NHL history to do so.

A younger Letang swallows Vatrano whole. This one ... needed to skate harder.

Below is Florida's second goal, roughly eight minutes later, by Brett Connolly, and it'd wind up the winner:

This problem's more reminiscent of the ones Letang's had for a while now, in that he's trying to make plays flat-footed. That's how the ghastly giveaway in Montreal occurred, as well as a couple against San Jose.

A younger Letang gathers that puck behind the goal and, with a single giddy-up, whisks it away. Not so here. He's pressured right away by Noel Acciari, then cut off by Vince Trocheck. So, spotting Thomas Di Pauli up the right boards, he turns his wrist to try a creative outlet that stays to the inside of the rink.

Never mind that Di Pauli's a left shot on the right side or even that he's just up from Wilkes-Barre. That needs to go around the boards, as simply and authoritatively as possible. If all Di Pauli manages to do is chip it out, hey, awesome.

But Letang doesn't do simple, if only because he's never had to do simple.

Maybe he does now. And maybe -- no, absolutely -- it's incumbent on Sullivan, the coaching staff, Sidney Crosby, Mario Lemieux, anyone at all with influence on Letang, to make that known to him.

Not that it hasn't been tried.

"I think Tanger can simplify his game," Sullivan spoke after this one. "He and I have had this conversation, and it's ongoing with us, usually. You know, Tanger has the ability to be a difference-maker, and we certainly don't want to take the stick out of his hands. But as we say to all of our players, sometimes the best play is the simple play. And it's just recognizing those situations."

He paused a moment.

"It's not going to be perfect out there, especially for guys who log the type of minutes that Tanger logs. But certainly, that's a conversation that Tanger and I have frequently."

I'm sure. The type that goes through one helmet ear-hole and out the other.

Upon further review, maybe Malkin would be best-equipped for this.

He's 33, virtually the same age. And he, like Letang, just went through a summer in which Jim Rutherford willfully aimed to make both uncomfortable about their futures in Pittsburgh by floating the possibility of trading one or both. Malkin very clearly took that to heart. And Letang, openly defiant on the subject from the day he reported to training camp, equally clearly did not.

Sticking with the positive: What this group of Penguins has done this season is amazing, 25-12-5 amid 172 man-games -- and star-games -- lost to injury. But they've done it as a collective, by playing the same way or, as I worded it to Letang, by being on the same page.

He's no longer that guy who can be the outlier.