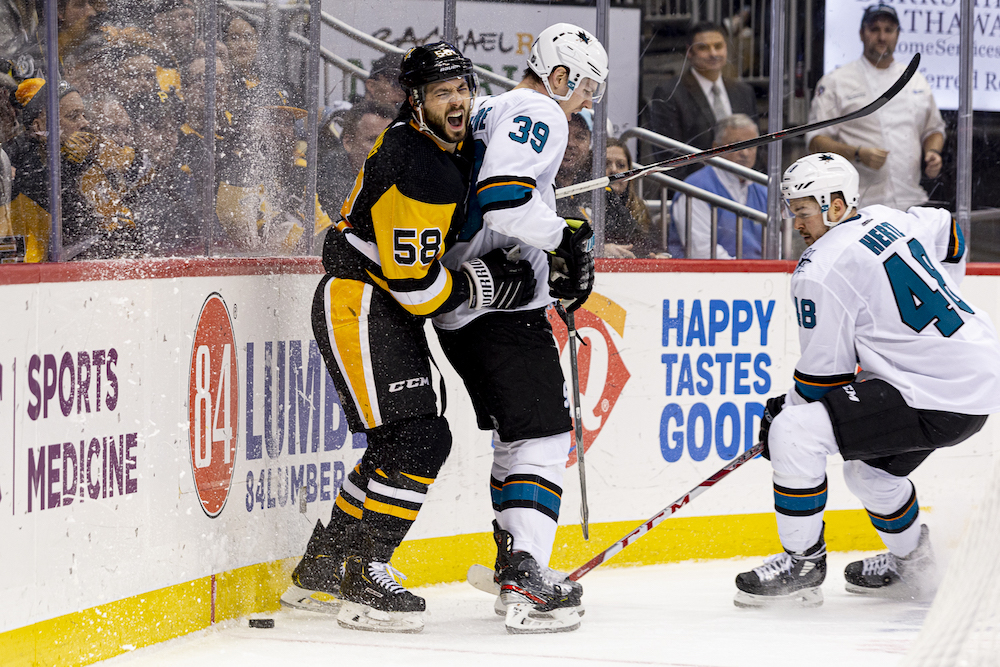 He also tends to generate far more good than bad on any given night.

Both things can be true, vexingly enough, and it's been part of the general Letang experience since the first time he laced up the skates in the Igloo. He's high-risk, high-reward, capable of an erratic range from elite to ... I don't know, however anyone would care to characterize this:

That's overtime of the Penguins' 3-2 loss to the Sharks on this Thursday night at PPG Paints Arena, an outcome claimed on Brent Burns' power-play blast shortly after the Letang penalty above.

And yeah, that's a blatant dive by Logan Couture. The instant he feels Letang's stick against his left shin, he milks it for all it's worth. Throws both skates out behind him. Even glances over to his left -- while still sliding forward on all fours, no less -- to check that referee Furman South had his arm raised.

But that's not what's pertinent, is it?

Nope. Because Letang had zero business putting that stick against that shin.

As the second angle above illustrates, the puck was well ahead of Couture, and Couture, being a left shot, had no play to make even if he'd won the footrace. He couldn't cut back to the inside going that hard and that deep into the zone and, even if he somehow had, Tristan Jarry has an easy time sticking him away.

There's no play for Couture. No reason for Letang to try to slow him in any way, much less illegally.

The correct and only answer, as ever: Who knows?

The Penguins' locker room was open to media within five minutes of the final horn -- faster than the norm -- and even then, Letang was out of there before we'd had a chance to enter. And it's not as if any of the remaining players were in position to explain it.

Not that much would've been forthcoming. Letang had pretty much expressed himself on the ice by barking at Furman, as captured in the photo atop this column by our Matt Sunday, and continued doing so all the way to the box. Given ample precedent, more of that is all Letang would've offered had he stayed at his stall. He's as honest as anyone I've ever covered, often brutally so, but he also honestly doesn't see the same occasional flaws in his game that others do. He wouldn't have after this, either.

He'd actually have seen as much awry with the overtime penalty as he would've with this ill-advised step-up in the first period to hand the Sharks a two-on-one:

That, my friends, is a one-handed poke at a charging Evander Kane, one of the game's most powerful skaters with the skill to match. So when Kane elegantly chips the puck by Letang for the eventual two-on-one feed to Timo Meier, only Jarry spared him from an additional earlier embarrassment.

There was more bad. And, again, there was good. There's always good, usually enough to more than offset the bad. Because Letang led all players with 25:10 of ice time, was on the ice for 18 scoring chances for the Penguins against eight for the Sharks, including an 8-2 advantage in high-danger scoring chances.

For the full season, Letang's five-on-five Corsi For percentage -- the most intricate, reliable measure of a player's 200-foot performance -- is 56.37, fifth-best among all NHL defensemen.

Why at seemingly rotten times?

If I were that smart, I'd be behind the bench rather than Mike Sullivan. And I don't think even he's that smart.