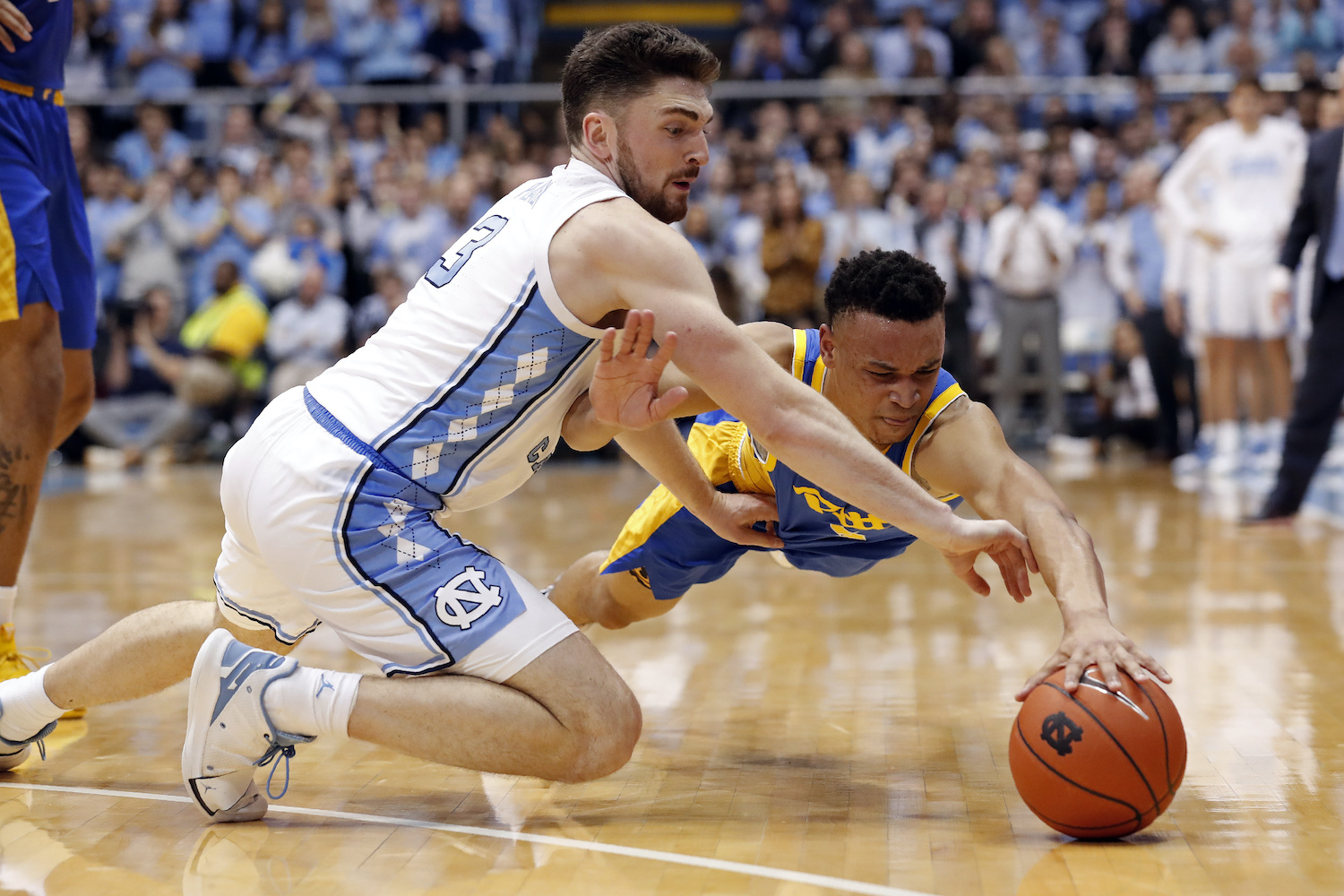 CHAPEL HILL, N.C. -- Eric Hamilton emerges from the visitor's locker room in the depths of the Dean Smith Center, headphones on, sweats zipped into a full-body cocoon of heather gray.

Capel grabs Hamilton and pulls him close for a quick word of encouragement, and, yeah, there's some relishing happening here, too. They're just out of earshot, but the body language says it all: Capel's helping him soak in that sweet, sweet victory, and rightly so. Moments earlier, this Panthers squad capped off a comeback upset over the University of North Carolina Tar Heels, 73-65, in front of so many stunned shades of baby blue.

"I'm proud of our guys," Capel began as he took the podium after the final buzzer. "It's been a really emotional, I guess, four days since our last game."

Precisely 18 words into his post-game press conference, Capel said it all. In the past, Capel's mentioned having "no rearview mirror" but glance up from the wheel of this season and take a peek for just a second.

That's the Wake Forest loss back home at Petersen Events Center on Saturday, hot on the team's trail. That one was ugly. And avoidable. And frustrating. Besides dropping the team to 10-4 and 1-2 in conference play, it did something worse: It lingered.

"To come out here on the road and to face some adversity ..."

Yeah, Coach. Then what happened after those first 20 minutes.

"And to fight our way out of it, and then in the second half, to play defense the way that we did and to execute on the offensive end the way that we did, it's really who our team has been for a good part of the season," Capel finished. "And the thing we just talked about, it's what's required to win in this league and to become a good basketball team and to become a winning program."

You know what else is required to win in the ACC and to "become a good basketball team?" That picture up at the top of this article.

That's Trey McGowens, Pitt's up-and-down star sophomore guard, pouncing all over a loose ball like a — pardon me for this — starving Panther. Only, just as he gains possession, he calmly calls timeout.

Nothing mindblowing. Nothing heroic. There's no highlight to be found of this play. It wasn't a dunk or a game-changing three-pointer — just a calm, smart play by McGowens to allow his team the opportunity to regroup and reset in a crucial moment, up 64-58, with 4:50 to go in the game.

It's exactly what McGowens didn't do against Wake Forest, a point I brought up with him after this one:

“I mean, the biggest thing coach was stressing throughout the game was staying together and staying locked in and just not beating ourselves," McGowens was saying.

Hold on, hold on. There's something important there. But I also want you to hear it from the other half of Pitt's star sophomore duo, Xavier Johnson.

Perhaps nobody was on the hot seat quite like Johnson after that loss against Wake Forest. In Capel's words, his team "panicked" late in the game, forcing up poor shots and failing to recognize the plays needed to secure victory for his squad. Johnson and McGowens combined to go 1 for 5 down the stretch in that one, but Johnson, in particular, forced a brick that had Capel literally flailing in frustration.

Johnson knows it, too:

“That was big," Johnson was telling me of that loss to Wake Forest. "I made a dumb decision at the end of the game. I know I did. That’s one thing that I gotta move on [from]. Because I got more games left.”

That play didn't just happen, though. Again, it lingered. There's losing, then there's getting snuffed out at home by a conference opponent, blowing a 16-point lead and melting the hearts of fans in the process. The latter just stings a little more.

"For the [first] practice back, I beat myself up a lot," Johnson said. "I got a text from Coach afterward. He was, like, ‘Bro, you gotta be yourself.’ He sent me a little clip from The Lion King that says, ‘If you look at the past, you can either run from it or you can learn from it.’ And I told him I’m going to learn from it and move on.”

Johnson did learn from it, going 6 for 11 for 17 points and three assists. His team was plus-20 with him on the court, the largest positive impact by any player in this one by that metric. But run it back to McGowens' comment — "Coach was stressing throughout the game" — and Johnson's fun Lion King anecdote there.

Consider all that against this comment from Capel when I asked him about the intangibles on display for his squad tonight. He preaches playing "smart" and "together." So how was that on display in this road win?

"We saw a togetherness," Capel began. "Saw guys trusting each other and making the correct play, whatever the correct play is. And the game will tell you what it is based on what the defense does. And our guys did that."

Just like McGowens pouncing on that loose ball and calling the timeout, Capel's touching on all those things that didn't happen in Pitt's last game — that ugly, sticky loss to Wake Forest.

Only now, there's a pause for some relishing. Because Pitt executed.

And they did so against the University of North Carolina Tar Heels.

“It means a lot," Justin Champagnie was saying after the game. "We just came off a tough loss to Wake Forest. And for us to come here in their home and to take the ‘W’ is a big step forward for us, and it gives us a lot of confidence.”

You just saw it.