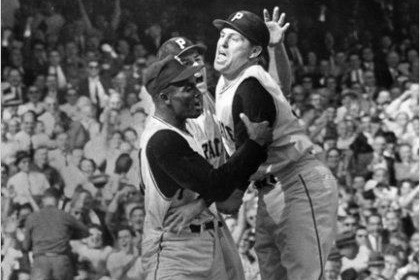 "Heck," Maz would respond anytime I'd bring this up in Bradenton, "I didn't even hit the biggest homer in that game"

Hal Smith, whose three-run home run for the Pirates in Game 7 of the 1960 World Series against the Yankees would be overshadowed an inning later by Maz's legendary shot, died Thursday at age 89 in Columbus, Texas, a small town near Houston.

And yes, it was Mr. Smith's home run that set the stage and, very nearly, stole it, on that magical fall day at Forbes Field half a century ago.

He'd begun Game 7 on the Pirates' bench, his platoon status with fellow catcher Smoky Burgess having limited him to two starts in the Series. But when manager Danny Murtaugh had lifted Burgess for a pinch-runner, Smith had his chance to play and stepped into the box in the eighth inning with two runners -- Dick Groat and Roberto Clemente -- on base and the Pirates down, 7-6.

The odds were against him. Two outs. A 2-2 count. And then Smith did this off New York righty Jim Coates:

As the NBC Radio announcer Chuck Thompson shouted to a national audience, "We have just seen and shared in one of baseball's great moments!''

It must've felt that way. Groat and Clemente waited for Smith at home plate, then bounced up and down like children in escorting him back to the Pirates' dugout, where he was further mobbed. And in the seats, as NBC's television announcer Mel Allen described it, "Pandemonium!"

Murtaugh was forced to turn to a struggling starter to try to close it out, and Bob Friend couldn't pull it off, New York scoring twice to tie at 9-9. Which brought a certain second baseman up in the bottom half to blast his own home run over nearly the same spot of the Forbes Field ivy that Mr. Smith had cleared.

"I knew I'd hit it. It was the hardest ball I ever hit at Forbes Field,'' Smith recalled for the Associated Press in 2010, in conjunction with a 50th anniversary reunion of that team held at PNC Park. "I hit that ball. I really hit that ball. I think it landed in a tree in Schenley Park. When I saw the people celebrating, going crazy, I said to myself, 'Uh oh, I've done something.'"

His teammates have long been passionate about the role he played that day.

"I always got too much credit," Maz said.

"It's the biggest forgotten home run in baseball history, in my opinion,'' Groat said at the time. "I always felt sorry for him because here he was, the hero, and then it was taken away from him. People forget that."

"If it wasn't for his home run," Face said, "Maz's wouldn't have meant nothing.'

Later in 2010, when a rare copy of the full Game 7 film had been found in the wine cellar of former owner and world-famous singer Bing Crosby, it was shown to all living members of the 1960 Pirates at a Downtown theater. Mr. Smith hadn't been able to make it to the summer gathering at PNC Park for health reasons, but he was at this one.

And when his moment came, when the ball cleared the fence all over again, he received the loudest, longest, warmest ovation of the night, including from his teammates.

Mr. Smith never bemoaned his fate in that regard.

"Joe Brown gave me a compliment as fine as I've ever gotten,'' Mr. Smith said in 2010, referring to the general manager of that team. "He said my home run was the biggest thrill of his life."I said, 'What about Maz?' And he said, 'After you hit that home run, I knew we were going to win.' "

That would represent the peak of Mr. Smith's 10 major-league seasons with the Orioles, Athletics, Pirates, Colt .45s and Reds, and he'd bat .267 with 58 home runs. A native of Illinois, he retired in Texas after his playing days.