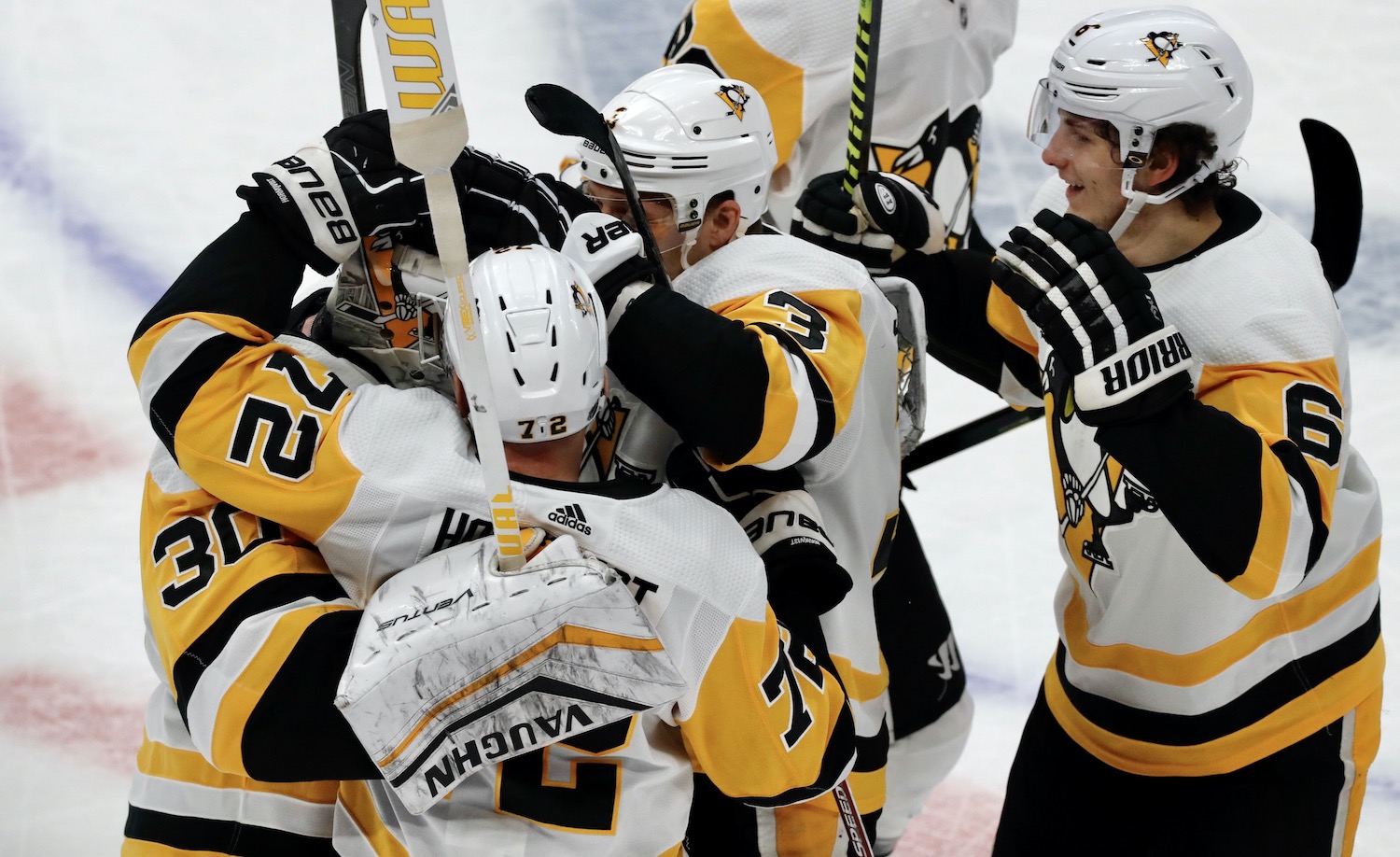 Late in the second period of what would become a 4-3 Penguins overtime victory at Pepsi Center Friday night, Colorado's Gabriel Landeskog had the puck just outside the Penguins' blue line, then casually flipped it into the air and toward the net.

It landed a couple of feet in front of Matt Murray, who was positioned squarely in front of it and figured to have no trouble smothering the puck after gravity pulled it back down to ice level.

Assuming it went toward him.

Instead, the puck bounced violently to the left, sailing over Murray's glove and into the net behind him:

"I can't really expect that kind of bounce," Murray said. "I'm just trying to get out and settle it down so our (defense) can make a play, and it bounces sideways on me."

Suddenly, improbably, the game was threatening to do likewise, as the Avalanche had a 2-1 lead near the end of a period in which the Penguins had had a pronounced edge in play.

Landeskog's goal was the kind that could not only abort a team's short-term momentum, but curdle its confidence. But not this team, and certainly not on this night. For some clubs, adversity is a depressant. For these Penguins, it's practically a nutrient.

So rather than wilting after Landeskog scored, the Penguins regrouped. After all they've endured during the first three-plus months of this season, one fluky goal hardly was enough to puncture their resolve.

"I thought the chatter on the bench after it happened was great," Mike Sullivan said. "Patric Hornqvist, in particular, really took some leadership there on the bench when it happened. They were all talking about, 'That happens. You have to forget about it. That's hockey. Let's just drop the puck and keep playing.'"

They did that for the next 100 seconds, until the second intermission arrived. Then the Penguins made a statement of another sort. One in which the words were secondary.

"They waited for Matt to make sure they gave him a tap on the pads and encouraged him," Sullivan said. "That's an indication of the type of team we've become."

So was their performance in the third period, beginning with Bryan Rust's game-tying goal at 1:14, just seconds after Murray had made a big-time stop on -- how fitting is this? -- Landeskog.

And then it was Evgeni Malkin's turn, as he wired a shot past Avalanche goalie Pavel Francouz from above the right dot at 15:43 to give them a 3-2 lead:

That looked to be the game-winner until Matt Calvert, a Penguins nemesis since his days in Columbus, pulled Colorado even with 30.4 seconds left in the third period, after Francouz had been replaced by an extra attacker:

Again, the Penguins could have been deflated.

And at 3:19 of overtime, Jared McCann secured a second point for them by throwing a shot past Francouz from the slot:

"It was another really gritty, hard win," Murray said. "That's what we needed tonight. That's a really good team over there. We just stayed resilient, no matter what happened."

That Colorado is a good team, fast and skilled, defies dispute, but the Avalanche isn't as good as the Penguins made them look at times during the first 20 minutes.

The Penguins lost a little of that excess respect -- and consequently, gained an upper hand -- during the second period, and didn't lose it even after Landeskog's one-hop goal.

And when the game moved into overtime, when one missed assignment or sloppy personnel change can dictate the outcome, they performed with the discipline and focus and execution that has allowed them to win four of their past five games that were settled then.

It's not just that the Penguins wanted to win. They were committed to doing whatever they could to maximize their chances.

"Like I tell the guys all the time, 'Hope's not a strategy,'" Sullivan said. "You can't hope that we're going to win a puck battle. We've got to make sure we defend, and we're diligent in limiting our opponents' opportunities. I give the players credit: They're committed to playing without the puck when they don't have it."

And when they didn't have the puck, Murray did a pretty good job of stopping it for the second game in a row. (At least the ones that weren't lobbed his way from 60 feet or so.)

This game seemed to take Murray another step toward getting his game back to the level it consistently reached earlier in his career, although his teammates contend that criticism of his play during the past few months was misguided.

"I don't think he never had his game," Letang said. "He's playing well for us. (Tristan) Jarry is playing unbelievable. We have the luxury of having two great goaltenders."

Against Colorado, they had one who possessed the mental toughness to not be shaken by an unfortunate goal that could have done serious damage to his psyche if Murray had allowed it to.

"You just brush it off," he said. "There's nothing you can do about it."