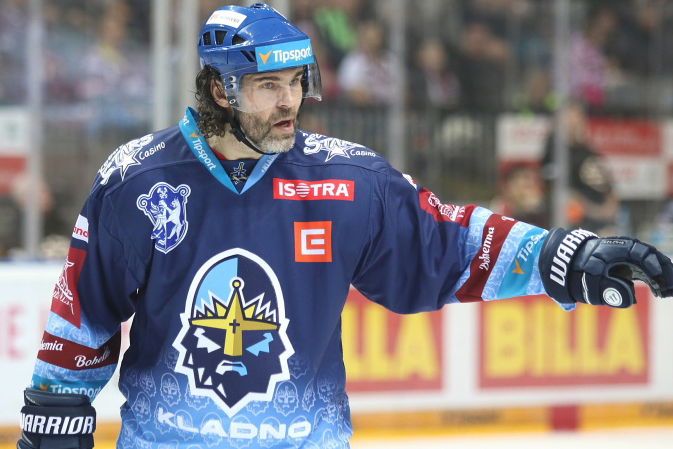 Jaromir Jagr returned to Rytíři Kladno's lineup in the Czech Extraliga on Sunday for the first time since he injured both thighs on Nov. 29, and he scored two goals and two assists in an 8-4 win over Sparta Praha.

Jagr, who turns 48 next month, scored both of his goals on power plays. His second tally was the game-winner:

"Jaromir went to the game, saying he wanted to help in power plays and maybe he wouldn't go so much on ice," Kladno head coach David Čermák said in Czech in his postgame press conference. "He wanted to go on power plays. There, everyone knows he can help. He holds the puck so that all five players are more calm. The power play looked much better right now."

Jagr missed Kladno's last 12 games with torn muscles in his thighs. He said on Wednesday that even though he's the owner of the team, it would be "total nonsense" to return to the lineup unless he was healthy enough to be one of the team's top 18 skaters. After Sunday's performance, it's probably safe to say he can still play.

"I didn't even know what to expect," Jagr said of his return. "I had an injury I had never had before. We could train a little with that, nothing to the fullest. Rather, I focused on the upper body, the shot. And I waited for me to get well."

Jagr's return was his first four-point game in the Czech league since Dec. 30, 2012.

The game was Jagr's first in the 2020s, making this the fifth decade in which he's played pro hockey, after he began his professional career in the Czech league in 1988. The only other player in hockey history to play professionally in five decades was Gordie Howe.

Share
Tweet
Email
Drunken Edelman arrested after jumping on car
Now that Cowher’s in, what of Tomlin?