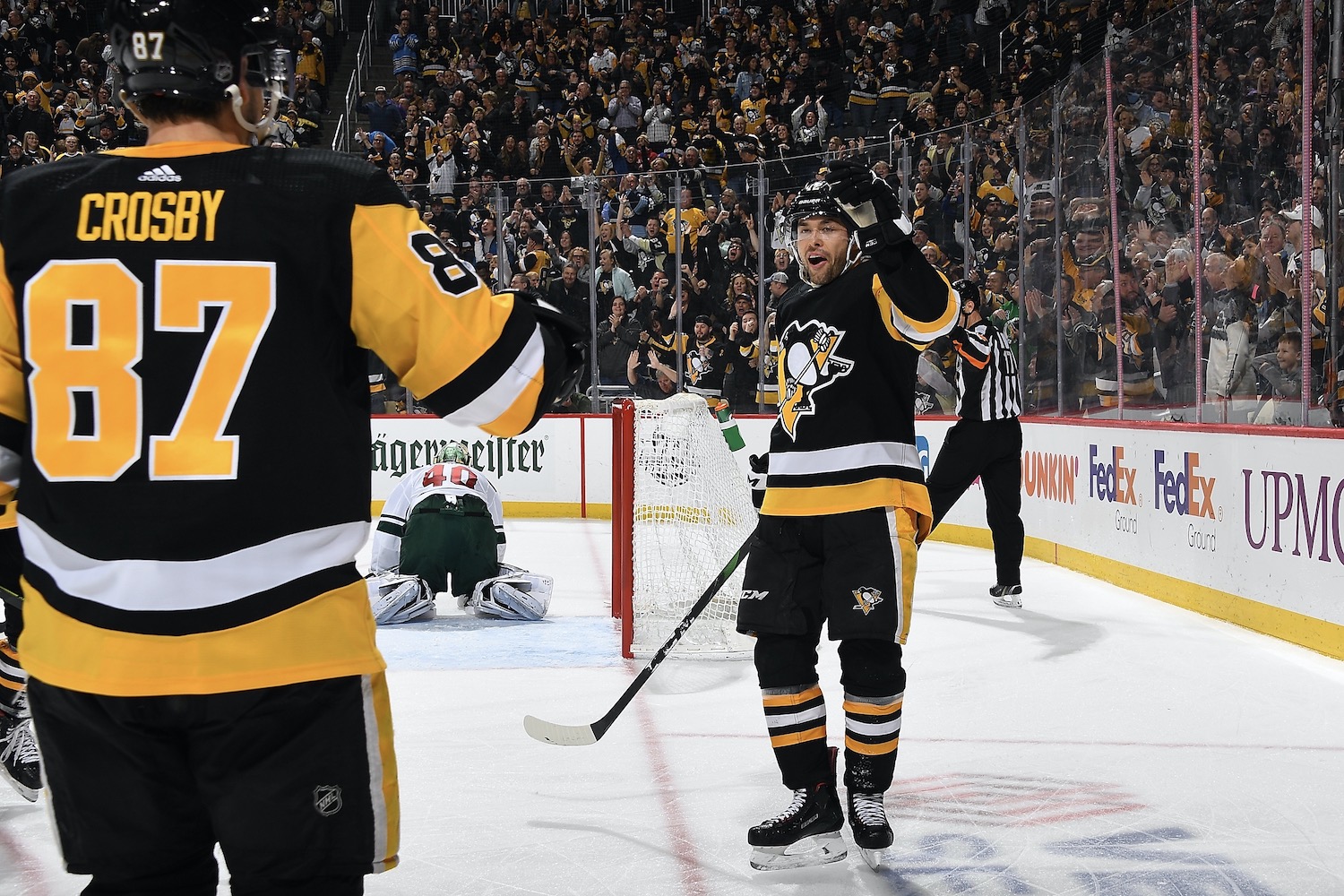 Dominik Simon caught himself, and cleverly at that.

I'd just asked, after he'd set up one goal and scored another in the Penguins' 7-3 slaughter of the Wild on this wonderful Tuesday night at PPG Paints Arena, how he and all the other wingers were going to maintain their own identities, their own level with not one but two superstar centers suddenly back in their midst.

And Dom began like this: "I think it's a huge thing. I really do. You have those huge players next to you, and you're trying not to focus on them even though you wanted to play with them since you were little."

That's when he laughed.

"Or wait, you could never even picture playing with them."

Refreshing as that expressed realization was, it came with more.

"But yeah," he continued, "you've still got to be you. There's a reason why every one of us is here"

Sorry, not to be the deflater. This really was, as I described it, wonderful. All of it. And nothing more uplifting than seeing the captain doing all he does, then plopping down at his stall, answering all the requisite questions, then smiling with each strip of each slice of equipment.

"It was good," Crosby would say with a slight exhale.

At the same time, when a team soars up to an 18-6-4 stratosphere without a presence of his scope, it's safe to raise the bar. Not just for Crosby and Malkin. Not anymore. Singling out the superstars, for better or worse, is so 2017-19, if you will. Now, it's about the collective, the chemistry, the camaraderie and all that other syrupy stuff.

But it's also, in the entirely tangible sense, about the wingers.

That's Bryan Rust feeding the Russian bear for the icebreaker 7:57 into the game. It's a fine passing sequence, but Rust is the pivotal point.

Rust finished a Malkin drop pass for the ages, one that would've been wasted if he didn't do his job, if he didn't believe in himself.

I posed the same question to Rust that I did to Simon.

"It's huge," he'd reply identically. "I think everyone in this room takes pride in their own game, takes pride in what they bring. It doesn't matter who we have out, who we have back in, guys are going to continue to bring what they have every night. And I think tonight was a good start."

But it also came on a night when the opponent was as dispirited, as disorganized as the Penguins were the opposite. Far greater challenges are ahead, not least of which is Thursday night in Boston. And it says here that nothing will matter more, particularly over the next little while, than how well the wingers stack up.

Let's be real: Jim Rutherford's going to want to make a move, and he'll want it to be on the wing. It's one thing to compensate for the loss of Jake Guentzel in January, quite another in the Stanley Cup playoffs. Real pedigree, real production will be a must. And as pricy as the apparent external options -- Chris Kreider, Mike Hoffman, etc. -- might be, there's also got to be a real reluctance to risk anything that could disrupt all that intangible goodness already in place.

So yeah, it was "a good start," as Rust worded it. Because nothing could solidify this team more than seeing Rust, Simon, McCann, a resurgent Patric Hornqvist, an equally visible Dominik Kahun, even Brandon Tanev ... all of them offering consistent contributions. If someone arrives from the outside, let that someone be a bonus, not a burden-carrier.

That'll start, as these guys universally agreed after this game, by staying true to themselves. The model for that very thing, unfortunately, is Guentzel, but that can still be the guide.

"All eyes are going to be on Sid and Geno now, and that's right because they're the best players," Kahun replied to my same question. "But that's good for us, too. We've got enough all-around players here, who can make plays, score goals. You have to be yourself out there. You have to be the best version of yourself. We all know why we're here. We all know we belong in the NHL. We all know we're part of helping this team win."